Italian Prime Minister Mario Draghi on Monday presented his government’s 220bn-euro ($266bn) European Union-funded recovery plan to parliament, saying it would decide the fate and credibility of the country.

Most of the cash will be spent on schemes to improve Italy’s fragile infrastructure, boost environmentally sustainable development and encourage digital innovation.

“In the set of programmes that I present to you today there is above all, the country’s destiny, the extent of its role in the international community, its credibility and reputation as a founder of the EU and leading player in the Western world,” Draghi told the lower house of parliament.

Italy was the first European country to be hit by the pandemic in early 2020 and remains one of the worst affected, with the EU’s highest reported death toll and one of the deepest recessions.

More than 119,000 people with coronavirus have died in Italy, while the economy contracted by a staggering 8.9 percent last year and a million jobs have been lost.

Draghi told politicians on Monday that his plan would help “repair the economic and social damage” caused by the pandemic. But Draghi said the plan also “addresses some weaknesses that have plagued our economy and our society for decades”.

There will be money to help women and young people, who have disproportionately lost out during the pandemic, while about 40 percent will be targeted at historically under-performing southern Italy.

But before Draghi spoke, opposition legislators complained that they were given less than 24 hours to study the government’s plan, which is more than 300 pages long.

Francesco Lollobrigida of the far-right Brothers of Italy party said asking legislators to debate it without knowing its contents reduced the principle of parliamentary scrutiny to a “joke”.

Draghi aims to present the 336-page document to the European Commission by an April 30 target date and intervened directly in talks with Brussels on Saturday to overcome some of the commission’s concerns about the plan.

The EU cash will be disbursed to the 27 member states in instalments through 2026, conditional on benchmarks being met and reforms adopted.

Italy has promised many of these reforms in the past but with little tangible success. Adding to the complications this time around is the fact that new elections are due by 2023 at the latest, giving Draghi a very tight window of opportunity.

The country has also been notoriously inefficient in using EU funds, but Draghi said it would not squander this historic opportunity.

“I am certain that we will manage to put this plan into practice,” he said to loud applause. “I am certain that honesty, intelligence and an appetite for the future will prevail over corruption, stupidity and vested interests.” 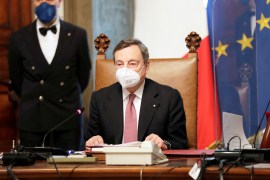 New PM Draghi will work to ease the economic and health challenges gripping the country. 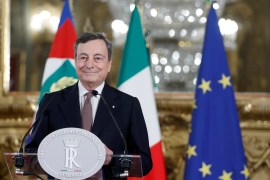 Technocracy is back in Italy – but with a different agenda 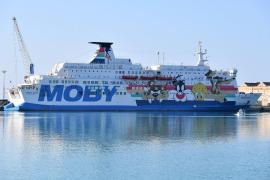 Tunisian migrants and asylum seekers being held on boats off the coast of Italy have drowned or attempted suicide.