The United States has cancelled the deployment of two warships to the Black Sea, Turkish foreign ministry officials said, amid concerns over a Russian military build-up on Ukraine’s borders.

Washington and NATO have been alarmed by the build-up near Ukraine and in Crimea, the peninsula that Moscow annexed from Ukraine in 2014.

The US embassy in Ankara had notified Turkey’s foreign ministry of the cancellation, officials said on Wednesday but did not provide a reason.

Turkey’s state-run Anadolu news agency later reported that no new notices had been conveyed to Ankara for potential deployments at later dates.

US officials said Turkey may have misunderstood the initial notification and that the deployment was never confirmed.

They said the US frequently notifies Turkey of potential access to the Black Sea, adding that a request does not necessarily mean its ships will pass through, but rather ensures that if they choose to, they already have the required approval.

Russia, which has warned Washington to stay far away from Crimea and its Black Sea coast, says the build-up is a three-week snap military drill to test combat readiness in response to what it calls threatening behaviour from NATO.

It said the exercise is due to wrap up within two weeks.

Ahead of the notification about US warships, Russia’s navy on Wednesday began a drill in the Black Sea that rehearsed firing at surface and air targets.

Turkish President Recep Tayyip Erdogan has called for the “worrying” developments in eastern Ukraine’s Donbas region to come to an end.

German Chancellor Angela Merkel and US President Joe Biden called on Russia to pull back troops from Ukraine’s borders.

Biden, in a phone call with Russian President Vladimir Putin on Tuesday, proposed a summit of the estranged leaders to tackle disputes and told Moscow to reduce tensions over Ukraine, the White House said. 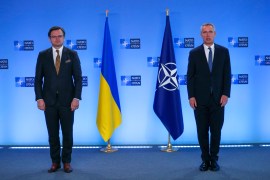 While NATO decries the massing of Russian troops to the border, the Kremlin slams Washington’s support for Kyiv. 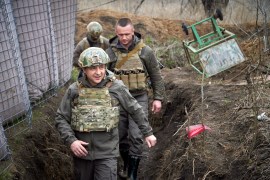 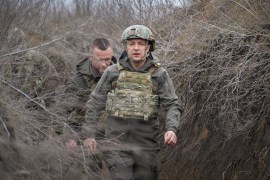 Meanwhile, Russia says it fears resumption of full-scale war in east Ukraine and could take steps to protect civilians.