Mauritius has deployed its coastguard and armed forces after a Chinese-flagged trawler carrying 130 tonnes of oil ran aground off the Indian Ocean archipelago nation.

It is the second shipwreck in less than a year off Mauritius after a tanker struck a reef in July last year with 1,000 tonnes of fuel leaking in the country’s worst environmental disaster.

The captain of the Lurong Yuan Yu issued distress calls late on Sunday afternoon and sent up flares after becoming stranded off Pointe-aux-Sables, in the northwest of the main island not far from the capital Port Louis.

On Monday, Fisheries Minister Sudheer Maudhoo said divers had found “no leak, no breach” in the hull of the ship and that efforts would be made to safely remove the fuel from the hold.

“The pumping operation will start tomorrow, and will last four to five days. The authorities will also try to refloat the fishing vessel,” he said.

The trawler carries 130 tonnes of fuel oil and five tonnes of lubricants, according to authorities.

Traces of oil earlier spotted around the vessel were not “heavy oil” but possibly lubricants, he said.

Drone footage showed dark patches in the Indian Ocean waters near the boat. Residents told the AFP news agency they saw fuel lapping at the shore.

Floating containment lines have been deployed as a precaution while the coastguard and soldiers have been mobilised.

Maudhoo said an investigation had been launched into the cause of the accident and police had been on board the stricken vessel and seized documents.

On Tuesday, workers began pumping oil from the vessel, according to the local newspaper, L’Express, adding that police helicopters are helping with the operation. It is expected to take up to five days to empty the ship and remove it from the reef, the newspaper reported.

On July 25, 2020, the Japanese-owned bulk carrier MV Wakashio crashed off Mauritius with 4,000 tonnes of fuel on board but did not begin leaking oil for more than a week.

By the time the government issued an urgent appeal for international help, the slick had reached the shore, coating mangroves, corals and other fragile ecosystems.

An army of volunteers scrubbed the coastline but the Wakashio kept leaking. More than 1,000 tonnes of oil eventually spilled into pristine waters.

The disaster was unprecedented for Mauritius, an archipelago of 1.3 million people where many derive their livelihood from tourism and fishing, and tens of thousands marched in protest over the government’s handling of the crisis. 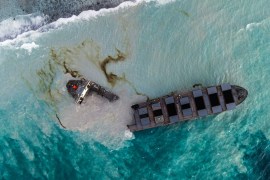 Thousands of volunteers work day and night to clean the pristine waters to avoid environmental and economic disaster. 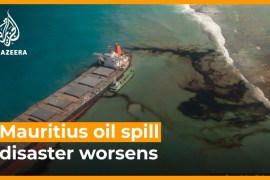 Mauritius has declared an environmental emergency after a ship carrying fuel ran aground. 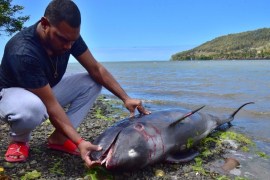 But environmentalists seek explanation for the deaths of 27 dolphins following an oil spill from a Japanese ship.