Senegalese opposition leader Ousmane Sonko has called for “much larger” but peaceful anti-government protests after authorities freed him on bail from custody following days of violent demonstrations.

His comments at a news conference on Monday in the capital, Dakar, came hours after he was officially charged with rape but released from detention.

Blaming his arrest last week on President Macky Sall, Sonko accused the incumbent leader of seeking to sideline his future political prospects before the country’s 2024 election. While Sonko publicly accused the president of plunging Senegal into an unprecedented crisis, the opposition leader said his goal was not to force Sall from power.

“We don’t want to take responsibility for undermining our democracy,” he tweeted late Monday. “But let’s be clear, the revolution is on the march toward 2024.”

Sonko has called the rape allegation politically motivated, and his release on Monday could help ease mounting tensions in one of West Africa’s most stable democracies. At least eight people died in clashes between security forces and protesters in the past week, according to rights group Amnesty International. The Senegalese Red Cross reported some 235 demonstrators have been injured.

Later on Monday, Sall told Senegalese families he knew they were suffering amid COVID-19’s economic downturn, and that the ensuing poverty was only further creating discontent with his government. He agreed to reduce the nightly curfew that many merchants blame for deepening their hardships.

“I understand your concerns and the anger you feel about the hard life you have to live in, mainly due to the unemployment accentuated by COVID-19,” Sall said in a televised address to the nation. “But when you ransack a business you don’t create jobs, you destroy them.”

Reporting from Dakar, Al Jazeera’s Nicolas Haque said the opposition leader’s release earlier in the day was met with jubilation by his supporters, many of whom gathered outside Sonko’s house in the capital city.

“The atmosphere is electric, protests have turned to celebration,” said Haque. “There is a sense among these protesters that they were able to release Sonko themselves; that they challenged the power of the presidency and they see his release as their personal victory.”

“These are unusual scenes,” Haque said. “Rarely do we see people pouring out in the streets in such numbers expressing their emotions in such ways.”

In the morning, hundreds of people had gathered outside the court in Dakar, waving flags and chanting “Free Sonko” before beginning to march. His supporters have called for three days of nationwide protests this week.

Sonko, who finished third in the 2019 presidential election, was arrested after an employee of a beauty salon accused him of raping her. He has denied the allegation and said it is an attempt by Sall to kneecap a political rival. The government has denied this.

The clashes had abated by Saturday but the calls for fresh demonstrations led to concerns the violence could escalate.

The military is out in downtown Dakar as a force of dissuasion still for many this feels intimidating- pic.twitter.com/gBB3ab3o8w

Much of Dakar on Monday was at a standstill in anticipation of further unrest, with army tanks patrolling central streets.

Military vehicles topped with machineguns were stationed in Dakar areas where recent clashes took place, and a dozen others were seen passing Independence Square in the heart of the city’s government quarter where the presidential palace is located.

Schools in the capital have been ordered closed for a week.

Kindled by Sonko’s arrest, the protests have grown into the worst political unrest the country has seen in years, prompting Senegal’s neighbours and the United Nations to express concerns about the rising tensions.

Political pressure has risen on Sall, whose tenure has been plagued by accusations that he unjustly torpedoes political rivals and worries that he may seek to extend his rule beyond his allotted two-term limit.

“This is not only about Sonko. We want Macky to resign,” yelled one man marching in a crowd of people on Monday.

“The feeling among a lot of these protesters is what they’re doing is not defending Sonko, but they’re defending the democracy and the history of stability that this country has,” Haque said.

“They see in this court case against Ousmane Sonko an attempt to eliminate a rival of President Macky Sall,” he added.

“What we have seen in the last few days during the protests was not only support for Ousmane Sonko, but also a cry for help by the youth of Senegal due to the socioeconomic impact of the restrictive measures enacted by the government to contain the pandemic, including the night-time curfew that has severely impacted the most vulnerable population in the informal sector,” Dialo told Al Jazeera.

“Beyond that, there are also questions abut the degradation of political liberties and civic freedoms… this is indeed a turning point.” 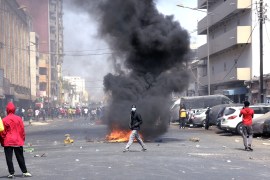 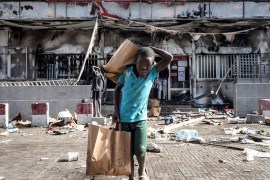 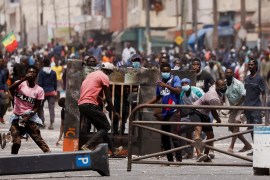 Macky Sall urged to engage in dialogue ahead of a planned new round of opposition protests starting Monday. 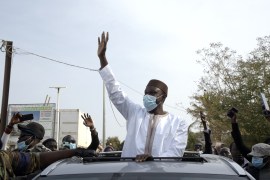 Detained opposition leader to appear before a judge on Monday as his supporters urged to return to the streets.