New York Governor Andrew Cuomo is facing increased pressure to step down, after he was accused by several women of sexual harassment and other inappropriate behaviour.

In a statement shared by local media on Sunday, New York State Senate Majority Leader Andrea Stewart-Cousins said accounts of alleged wrongdoing against Cuomo are “drawing away from the business of government”.

“New York is still in the midst of this pandemic and is still facing the societal, health and economic impacts of it. We need to govern without daily distraction. For the good of the state, Governor Cuomo must resign,” she said.

Several women have come forward in recent weeks to accuse Cuomo of sexual harassment and misconduct, including inappropriate comments of a sexual nature, as well as unwanted sexual advances.

Cuomo, who drew national attention for his handling of the COVID-19 pandemic, has also been criticised after US media outlets reported that his top aides obscured the true number of people killed by the coronavirus in the state’s nursing homes.

“We have allegations about sexual harassment, a toxic work environment, the loss of credibility surrounding the COVID-19 nursing home data and questions about the construction of a major infrastructure project,” Stewart-Cousins said in her statement.

State Assembly Speaker Carl E Heastie also spoke out on Sunday about the allegations, which he described as “deeply disturbing” and having “no place whatsoever in government, the workplace or anywhere else”.

“I too share the sentiment of Senate Majority Leader Stewart-Cousins regarding the Governor’s ability to continue to lead this state. We have many challenges to address, and I think it is time for the Governor to seriously consider whether he can effectively meet the needs of the people of New York,” Heastie said in a statement, as reported by local media.

While Cuomo at first denied any wrongdoing, he said on February 28 that he “never intended to offend anyone or cause any harm”.

“I now understand that my interactions may have been insensitive or too personal and that some of my comments, given my position, made others feel in ways I never intended,” he said in a statement at that time.

New York is still in the midst of this pandemic... We need to govern without daily distraction. For the good of the state, Governor Cuomo must resign

Last week, he apologised and said he would cooperate with an investigation into his conduct, but would not resign.

He reiterated that position on Sunday, telling reporters during a conference call that it would be “anti-democratic” for him to step down.

“They don’t override the people’s will, they don’t get to override elections,” said Cuomo, when asked about members of his own party calling for his resignation. “I was elected by the people of New York state. I wasn’t elected by politicians.” 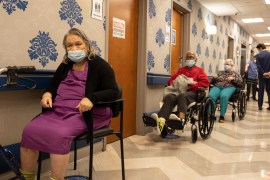 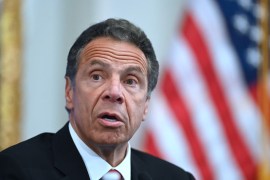 Accusation comes just hours after Cuomo referred himself for investigation over similar allegations from two ex-aides. 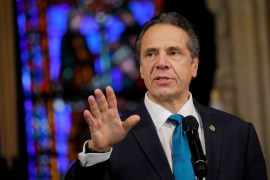 Andrew Cuomo says he will fully cooperate with an investigation into sexual harassment allegations.