Bolivians are voting in municipal and regional elections on Sunday amid a surging COVID-19 pandemic that has stretched the country’s healthcare system.

“After restoring democracy in 2020, today it is up to us to elect our territorial representatives,” President Luis Arce tweeted shortly after polls opened at 8am local time (12:00 GMT).

“Bolivia is a democratic model in a pandemic,” he said.

About 7.1 million people will head to polling stations across the country for the mandatory vote to elect nine governors and 336 mayors, as well as their respective regional assembly members and municipal councillors.

Bolivia has reported more than 253,000 cases of COVID-19 and more than 11,800 coronavirus-related deaths, according to Johns Hopkins University data, while healthcare workers went on strike last month to demand stricter public health measures.

The president of the country’s electoral authority, Salvador Romero, welcomed Bolivia’s effort to hold two national elections amid the pandemic.

He won 55 percent of the vote, avoiding a potential runoff, while MAS also won majorities in both houses of Congress.

“Now our great challenge is to rebuild our homeland in peace, to regain joy, stability and hope for a better tomorrow for all Bolivians,” Arce said on social media after the results were announced.

“We won’t let down the trust that people have placed in us.”

According to recent polls, MAS candidates are facing challenges in municipal contests in parts of La Paz, El Alto, Cochabamba and Santa Cruz.

The same polls predicted the political opposition was favoured to win the governorship in the region of Santa Cruz, would be in a close race for the governor post in La Paz, and would fall short in Cochabamba.

Al Jazeera’s Daniel Schweimler, reporting from Argentina, said the pandemic was the central issue on voters’ minds leading up to the election.

“The pandemic has starkly highlighted the issues that most concern Bolivian voters,” said Schweimler, pointing to health and economic issues. 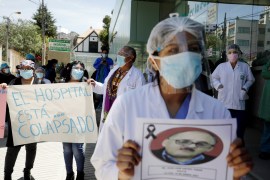 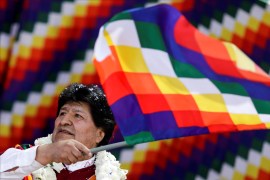 After a year in exile, Morales returns to a polarised Bolivia following the election victory of his left-wing party. 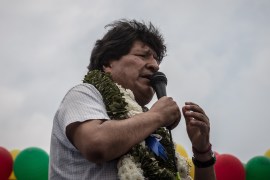