The United States Senate has narrowly passed an amended version of President Joe Biden’s $1.9 trillion COVID-19 stimulus bill, sending the legislation back to the US House of Representatives for final approval.

In an around-the-clock session that began on Friday, US legislators worked through a series of amendments on Saturday morning before passing the legislation in a 50-49 vote.

Republican and Democratic senators had argued over how long to extend enhanced unemployment benefits for and how much to offer during the pandemic, which has left millions of Americans reeling and battered the country’s economy.

The bill will return to the House of Representatives for final congressional approval next week, after which legislators can send it to Biden for his signature.

“When we took office 45 days ago, I promised the American people that help was on the way. Today, I can say we’ve taken one more giant step forward in delivering on that promise,” Biden said during a news conference on Saturday afternoon.

“It obviously wasn’t easy. It wasn’t always pretty, but it was so desperately needed – urgently needed,” Biden told reporters.

The bill has been one of Biden’s top priorities in the early weeks of his presidency, as he had promised to enact a programme to tackle the surging pandemic and provide financial support for hard-hit citizens.

The US has recorded more than 28.9 million cases of COVID-19 and more than 523,400 coronavirus-related deaths, according to Johns Hopkins University data – the highest respective tallies in the world.

This past week, Biden urged Democrats to pass the legislation quickly, even without support from Republicans.

“We tell the American people, help is on the way,” said Democratic Senate Majority Leader Chuck Schumer. “Our job right now is to help our country get from this stormy present to that hopeful future.”

Al Jazeera’s Mike Hanna, reporting from Washington, DC, said the Senate debate on the legislation was the longest in recent memory.

“Twenty-four hours filled with repeated objections by Republican members, amendment after amendment was voted on and then rejected, all by the slimmest of majorities,” he said.

“President Biden has now got his first major legislative victory – and it’s a big victory, indeed.”

The bill provides direct payments of up to $1,400 for most Americans, extended emergency unemployment benefits, and vast piles of spending for COVID-19 vaccines and testing, states and cities, schools and ailing industries.

The extended unemployment payments, which are to be paid out on top of state jobless benefits, proved to be the most contentious part of the bill. The House bill had set the supplemental benefit at $400 a week, but Senate Democrats finally agreed to knock that down to $300.

The House bill also featured a measure to more than double the minimum wage to $15 an hour, which the Senate also rejected.

Republicans had earlier raised concerns about the bill’s hefty price tag and some more moderate members of the party in January had tried to get Biden to scale back the legislation – a request that was ultimately rebuffed.

The measure follows five earlier ones totalling about $4 trillion enacted since the beginning of the pandemic and comes amid signs of a potential turnaround.

Vaccine supplies are growing, deaths and caseloads have eased but remain frighteningly high, and hiring was surprisingly strong last month, though the economy remains 10 million jobs smaller than pre-pandemic levels.

James Warren, the editor of Newsguard, said the passing of the bill was likely to help Biden’s popularity.

“It’s an extraordinary amount of money,” he told Al Jazeera.

“For a family of four, say living in the state of Massachusetts, with a total household income of about $50,000 with one person unemployed – they are going to get direct payments of $22,000. That’s a huge amount. That doesn’t even count unemployment benefits that they may be already getting,” he said.

“Of course, you’ve got some economists in this country debating whether this will overheat the economy and lead to inflation. But the bottom line, if you are Joe Biden is that most polling suggests right now that not only do about 60 percent approve of your performance – which is a lot higher than his predecessor ever got. But approximately 70 percent – even higher – approve of the way you appear to be handling the pandemic.”

The Democratic Party holds a slim 10-seat advantage in the House, which needs to approve it before going to Biden, who will then sign it into law.

Steny Hoyer, the Democratic House Majority leader, said in a statement on Saturday the House would vote on the Senate-approved version of the bill on Tuesday, “so that we can send this bill to President Biden for his signature early next week”.

Al Jazeera’s Hanna reported that the arduous legislative process involved in passing the COVID relief bill in the Senate demonstrates that despite holding a slim majority, Democrats face many challenges ahead.

“What this whole process has shown is something quite problematic for President Biden in the months ahead and that is that pushing through legislation on this basis – on the slimmest of majorities – requires complete participation from every Democrat,” he said.

“This is going to be a problem for President Biden in the months ahead because you do have a situation where any legislative advance will depend on the vote of an individual Democratic senator. It could come down to that.” 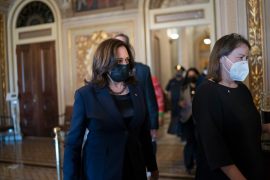 US Senate poised for voting marathon over $1.9T stimulus bill

The Senate plans to vote at midday on a slew of amendments, mostly by the GOP and virtually all likely to be rejected. 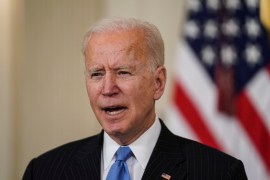