By
Parth MN
Correction11 Apr 2021
An earlier version of this article stated Ayesha Khatun was a left-wing coalition’s candidate in 2014 and 2019 national polls. She was in fact the Socialist Unity Centre of India (Communist) candidate.

Nadia, West Bengal, India – Kumaresh Adhikari became a political activist much before turning 18 – the age when you can vote in an Indian election.

In his teens, he would plaster the walls in his village in India’s eastern West Bengal state with posters of the party he believed in as he mobilised more activists to join the ranks.

Five decades later, at 71, his commitment towards galvanising public support for political mobilisation has not changed. However, his political affiliation has.

Adhikari, who once worked for the Communist Party of India-Marxist (CPM) is today a campaigner for the right-wing Bharatiya Janata Party (BJP), led by Prime Minister Narendra Modi.

Modi’s BJP, which has never won power in West Bengal, has emerged as the main challenger in an eight-phase state legislative assembly election that started last week and will end on April 29. Results will be declared on May 2.

Adhikari, who lives in a remote village located near India’s eastern border with Bangladesh, explains why he now sits on the right of India’s ideological spectrum even though he started his journey with the left.

“The communists spoke up for the poor. I came from a poor family so I identified with them,” he said, sitting across his furniture shop in Kadipur village in Nadia district, about 120 kilometres (74 miles) northeast of state capital, Kolkata.

“So many years have gone by, but I am still poor. The CPM did not create enough jobs. They did little to alleviate poverty. Just look at my village.”

The left front – of which CPM is the main party – ruled West Bengal for 34 consecutive years from 1977 to 2011 – one of the longest-elected communist governments to rule in any part of the world.

Adhikari’s Kadipur village falls in Krishnaganj constituency, which the CPM represented in the state assembly for all of those 34 years before Trinamool Congress (TMC), led by its firebrand chief Mamata Banerjee, came to power in 2011.

‘From left to Lord Ram’

West Bengal has a long history of political violence, with the large CPM cadre accused of attacking opponents, often fatally, during their decades of rule.

After the TMC came to power in 2011, the brunt of the new governing party’s brute force was borne by the left workers such as Adhikari.

“I have been tied to a pole and tortured by TMC goons,” he told Al Jazeera. “The CPM became so weak so quickly after they lost power that they could no longer protect activists like me.”

For him, joining BJP was a matter of survival. “BJP is a force in India and they have the resources and might. I had to join them for survival in 2014. There are many like me,” he said.

As West Bengal goes through another election, the trend of left workers and voters deserting the party to join the Hindu nationalist BJP continues to be seen across the state – a phenomenon locally described as “Vaam se Ram” (From the left to Hindu god Ram).

The reasons behind the trend are multifold: desperation to protect themselves from attacks by TMC workers; fatigue after decades of CPM dominance; little potential for growth in a party seen as redundant; and, most importantly, the Hindu supremacist campaign run by the BJP and its ideological mentor, the Rashtriya Swayamsevak Sangh (RSS), in the state.

Inspired by the rise of Nazism in Europe, the RSS was formed in 1925 and aims to create an ethnic Hindu state in India by denying other minorities, mainly Muslims, their political rights.

After their induction into the BJP, many former CPM workers Al Jazeera talked to in West Bengal said they undertook a training programme conducted by Vishwa Hindu Parishad (VHP), a far-right RSS affiliate accused of attacking Muslims and Christians across the country, to help them make the ideological shift.

The fresh BJP recruits said they were told by the VHP about the importance of “prioritising Hindus” and how Muslims were involved in the smuggling of cows, which many Hindus consider sacred.

Somen Ghosh, 33, used to be a prominent activist with the CPM’s student body in Krishnaganj. He says he has spent the past year looking after 250 cows seized by India’s Border Security Force (BSF).

“The cows were being smuggled by Muslims and BSF caught it,” he said. “But someone has to look after the cows. As a Hindu, it is my duty.”

Rita Biswas, 40, who worked with the CPM for 10 years between 2001 and 2011, said she joined the right-wing party in 2018 because she wanted to become a respected political activist in her constituency.

“I got nowhere working with the CPM,” she said. “They expect you to toil without any personal returns. Why is it wrong to harbour personal ambitions?”

A resident of Ghugurgasi, another village in the Krishnaganj constituency, Biswas runs a self-help group for women. She says she also has to protect herself from the “hooliganism of TMC workers”.

“My husband is a migrant labourer. He is mostly working out of the village. I need to think about me and my family’s safety.”

West Bengal opposition leaders and voters were often attacked or threatened by CPM workers during their long rule.

“Mamata Banerjee was one of them,” said Mohammad Reyaz, a Kolkata-based academic and political commentator.

“Therefore, when she came to power, she did not allow any opposition to thrive. There are villages in Bengal where CPM offices were never allowed to open after 2011. The BJP provided an alternative to the CPM cadre and voters being pushed to the margins.”

Election data supports Reyaz’s claim. Between the state polls in 2016 and the national election in 2019, the CPM’s vote share in West Bengal dwindled from 26.6 percent to 7.5 percent. At the same time, the BJP’s vote share rose from 10.16 percent to 40.7 percent.

The Jangalmahal region, once a left-wing bastion with a large tribal population and one of the state’s most underdeveloped areas, has seen an overwhelming shift to the BJP since 2009.

BJP, which had little electoral presence in this region, has virtually wiped out CPM now.

The left workers think they can enable the vote share of BJP and then get it back once the TMC is out of the way. But it does not work like that.

Kalicharan Shaw, who works for the BJP’s media cell in West Bengal, said the shift from left to right in West Bengal has little to do with ideology.

“Ideology largely works with the urban, elite electorate, which is still voting for the left,” he said. “The situation in rural areas is different. For them, representation matters.”

Shaw said the left had West Bengal for 34 years but the party was “dominated by upper castes” among the Hindus.

“The state has a significant population of scheduled castes, backward castes and scheduled tribes. They are our biggest vote bank because the left never nurtured or produced a leader from these communities,” he said.

The tectonic shift away from the left, however, came in 2007 at Nandigram, a town 130 kilometres (81 miles) south of Kolkata, when the government led by Chief Minister Buddhadeb Bhattacharjee wanted to acquire farmland to develop a special economic zone.

But the farmers, backed by opposition leaders, protested the acquisition. To break up the agitation, left-wing cadres allegedly attacked the site. Official records showed 14 deaths, but more than 100 people were said to be missing. Allegations of rape were also made.

The Nandigram incident marked the beginning of the end for the left in West Bengal. In the last national election held in 2019, it drew a blank. In 2014, it won just two out of 42 seats.

However, Mohammad Salim, a senior CPM leader, said the situation in West Bengal has changed in the past two years.

“During the coronavirus-induced lockdown, TMC and BJP were nowhere to be seen,” he told Al Jazeera. “We were in the streets, fighting for those struggling with economic hardships.”

Salim said the CPM is still raising the issues of students, women and farmers in the current election. “But the media is ignoring it. We have analysed our failures and you will see a rejuvenated CPM in the upcoming elections,” he said.

On the ground, though, the reality appears to be different. For a party that dominated the Jangalmahal region for years, its presence today is strikingly underwhelming as flags and posters of other political parties drown out the CPM campaign.

At a brick kiln in one of the remote villages of Purulia district, none of the labourers Al Jazeera talked to said they would vote for the CPM.

Sadanand Singh, 37, and his wife Dipali, 28, toiling in the twilight in Dabra village, said their families traditionally voted for the CPM, but the next generation has moved away.

“The condition of workers like me did not change much,” said Sadanand. “When TMC came around, we gave them a chance. But that party also turned out to be disappointing. Now, we have a new option in BJP. We should try that out too.”

The prospects of a rising BJP, which had little say in West Bengal until 2016, has made several West Bengal observers nervous. The party, heading the federal government since 2014, has been accused of throttling freedom of expression, jailing its critics, and persecuting the minorities, mainly Muslims, who constitute more than 14 percent of the country’s population.

In Bengal, Muslims form nearly 30 percent of its population, raising concerns over the BJP gaining a strong foothold in the state.

But critics say the CPM also failed to stop communal forces from entering West Bengal by ignoring the right-wing party. Instead, the CPM were bent on defeating the TMC in the 2019 election.

In the elections that year, CPM supporters were seen campaigning alongside BJP candidates with saffron flags, while the left-wing party’s leaders were said to be aware of the transfer of their vote to the BJP.

Former West Bengal Chief Minister and CPM stalwart, Buddhadeb Bhattacharjee, had reportedly warned against this trend. “There is no use in leaping from a TMC frying pan into the BJP’s fireplace,” he had said.

Ayesha Khatun, 50, who was the Socialist Unity Centre of India (Communist) candidate in 2014 and 2019 national polls from Rampurhat in Birbhum district, expanded on the “mistake” committed by the communists in propping up the BJP to defeat the TMC.

“The left workers think they can enable the vote share of BJP and then get it back once the TMC is out of the way,” she told Al Jazeera. “But it does not work like that. The public is not a property of anyone’s father.” 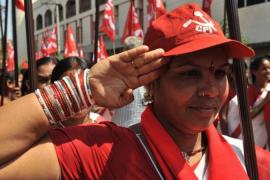 From Marx to Modi in West Bengal? 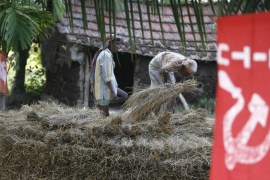 The death of the Indian left

The Left Front failed miserably at the last election. Does this mean there is no future for leftist politics in India? 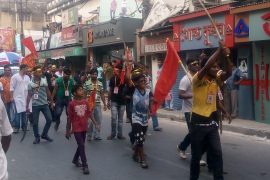 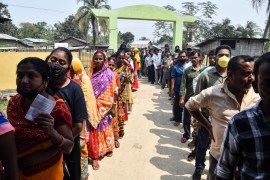