Sitting at her home in a picturesque town in central Kashmir, Munawar (not her real name) says she has closely witnessed the recent years of unrests, lockdowns and fear among the people in the disputed region.

“Had we feared the darkness like this, dead we would have been, nameless, long ago,” she recently wrote.

She says her poetry is about “all the happenings in Kashmir, about the people in jails, about the vast meadows, about mountains, about deaths and the fear”.

“When the light brings fear, and darkness frightens us, better than this dread, is death,” she said in another of her poems. “An accident after accident, I have witnessed… Destruction of my home, I have witnessed.”

“Writing gave relief to my anxiety,” she told Al Jazeera. “I shared it with people on social media but now I am having more anxiety because I write and I am unable to share it anywhere because of the fear that you can be questioned for your words.”

Since the March 3 order, social media in Indian-administered Kashmir, once a vibrant space for political debates and expressions of dissent, has largely fallen silent.

The order authorises the police in the disputed region to scrutinise social media accounts of government employees, saying no new government recruit would be paid their salaries until they undergo a verification process by the Criminal Investigation Department (CID).

The order says government “instructions are not being adhered to” in some departments, “as a result of which many individuals with dubious character antecedents and conduct” have been paid “without obtaining mandatory CID verification”.

The order is the latest in a series of measures – some of them striking at the heart of right to free speech – imposed by the Indian government since it abrogated the Muslim-majority region’s limited autonomy in August 2019, followed by months of a crippling security lockdown and communications blackout.

The measures have created panic among old and new government employees in Indian-administered Kashmir who call it “thought-policing” and a “new normal” under India’s Hindu nationalist government.

In 2017, when the region had an elected government run by a coalition of the right-wing Bharatiya Janata Party (BJP) and Kashmir-centric People’s Democratic Party (PDP), the administration asked its employees to desist from expressing their political opinions on social media.

The fear is more palpable among young job aspirants.

Muhammad, 32, a resident of south Kashmir, recently completed his doctoral course and applied for several government jobs. He told Al Jazeera the government has “perfected the technique of silencing people”, describing it as “a lockdown on thoughts and expression”.

“I think this time, they have silenced a huge population employed by the state,” said Muhammad, who did not want to be identified by his first name.

Muhammad fears that if he posts anything critical about the government on social media, it could hamper his job prospects. “I think not twice, but a dozen times.”

Defending the government’s crackdown on social media accounts, Manoj K Dwivedi, a senior official in the region’s administration, told Al Jazeera that “times are changing and the virtual address of the person is as important as his physical address”.

“The social media conduct is very important. There are hundreds of things which tell about the conduct of the person on social media,” he said.

Dwivedi said there is “no negative intention” behind the CID verification.

“This is just to verify whether a person is involved in any controversial, unlawful or questionable conduct. Everyone has a freedom of speech, but when you are in civil service, you have certain limitations,” he said.

“When anyone comes to the government services, he has to change according to government’s rules. Social media is a part of verification now.”

In June last year, Habeel Iqbal, an outspoken lawyer based in southern Kashmir’s Shopian district, was called by the police and questioned for six hours over his social media posts.

“They (police) took my phone, asked for its passcode and wrote it on its back with a permanent marker,” Iqbal told Al Jazeera, adding that he has now become “more cautious” of what he shares on social media.

“I won’t say I am brave and I don’t fear any more. I have surely become more conscious with what I write. You can say at a subconscious level, I have self-censored myself now,” he said.

Iqbal said “this invasive and intrusive surveillance” is designed to restrict information and is “against the international standards in free speech and expression”.

“People feel they are living in a panoptic society in which the invisible eye is always watching them, resulting in self-censorship and self-surveillance.”

In the past two years, multifaceted surveillance machinery has come into existence in the Kashmir region as demonstrations are banned and social media users summoned and detained over their “anti-national posts”.

The result has been a mammoth silence. Al Jazeera reached out to a dozen prominent activists in Indian-administered Kashmir, who had been vocal in the past.

Gowhar Geelani, journalist and commentator, told Al Jazeera the new measures are aimed at “instilling psychological fear, making it a permanent feature and a new normal”.

“We don’t write on important issues that are about our existence and identity, but talk about tulips and tourism,” Geelani said, referring to the self-censorship and fear among Kashmiris over sharing anything online.

In another move, police recently said they would recruit some residents as cyber volunteers who will be tasked with identifying and reporting “anti-national” social media content.

Indian-administered Kashmir is among the first places to kick off the initiative.

“Volunteer shall maintain strict confidentiality of tasks assigned or carried out by him/her, as a part of the programme,” reads the police announcement.

Residents and activists in and outside the disputed region have also accused social media platforms such as Twitter of censoring Kashmir-related content.

In one such case, the account of Kashmiri diaspora-led group, Stand With Kashmir, which has more than 30,000 Twitter followers, was recently suspended.

In an interview with Al Jazeera, the group’s spokesperson said many such accounts, most formed after August 2019, as well as accounts of rights activists and Kashmiri individuals, were also suspended by Twitter “without a reason”.

“Twitter’s suspension is a continuation of a campaign of suppression against Kashmiri activists and information on Kashmir,” said the spokesperson, who did not want to be identified.

When Al Jazeera reached out to Twitter about the allegations, the United States-based company said: “We enforce Twitter rules judiciously and impartially for everyone on our service.”

Stand With Kashmir’s account was later restored, but some other Kashmiri handles have since reported being temporarily suspended.

A report published earlier this month by Freedom House, a US-based non-profit, categorised Indian-administered Kashmir as “not free” while India was downgraded to “partly free”.

Geeta Seshu, co-founder of Free Speech Collective, a group that advocates for freedom of expression in India, said monitoring of social media is a violation of a citizen’s right to privacy.

“Besides curbing their right to speak freely, the monitoring of their social media accounts is also a violation of their fundamental right to privacy. Surveillance like this is totally reprehensible and more reminiscent of an authoritarian state than a democratic one,” she said.

Seshu said tasking civilian volunteers to spy on other citizens was “reminiscent of Nazi Germany, where citizens were enlisted to spy on and report on one another”.

“It is a sick move aimed at “dividing social solidarities among citizens, sow seeds of suspicion and mistrust amongst neighbours and discourage fraternity.” 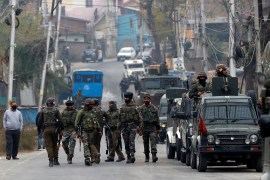 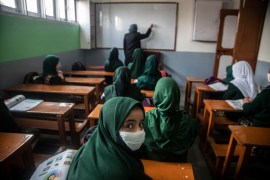 Kashmiri children return to schools after two years of lockdowns

Initially closed in 2019 after Kashmir’s semi-autonomy was revoked, schools were shut again due to COVID in March 2020. 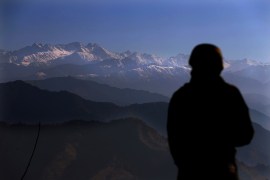 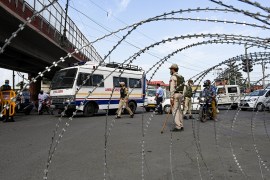