Ever Given, the massive container ship blocking Egypt’s Suez Canal for nearly a week, has been partially refloated, the Suez Canal Authority (SCA) said, raising hopes the busy waterway will soon be reopened.

Monday’s move comes a week after the container ship ran aground in high winds, blocking one of the world’s busiest shipping lanes.

“The position of the ship has been reorientated 80 percent in the right direction. The stern… moved to 102 metres (335 feet) from the shore” compared to its position four metres from the shore previously, Suez Canal Authority (SCA) chief Osama Rabie in a statement.

The process “will resume when water flow increases again from 11:30 am (0930 GMT)… in order to completely refloat the vessel, so as to reposition it in the middle of the waterway,” the statement added.

The partial freeing of the vessel came after intensive efforts to push and pull the vessel with 10 tugboats when the full moon brought spring tide, Egypt’s Leth Agencies said

The 400m (1,312 foot) long Ever Given became jammed diagonally across a southern section of the canal in high winds early last Tuesday, halting shipping traffic on the shortest shipping route between Europe and Asia.

Ship-tracking service VesselFinder has changed the ship’s status to under way on its website.

If you want to see how hard they have strained on the #EVERGIVEN I’ve included some of their tracks here.

Nice indirect illustration of how much the ship has shifted. pic.twitter.com/0lmJEr7dU4

M/V EVER GIVEN has partially refloated in the #SuezCanal, pending official confirmation from Suez Canal Authority. pic.twitter.com/PQCn3K2fE6

A spokesman for the vessel’s owner said there has been damage sustained by the ship on its bow when it got stuck “but no new damage has been reported”.

The Suez Canal salvage teams intensified excavation and dredging on Sunday and were hoping a high tide would help them dislodge it.

Egypt sent extra tug boats to assist with efforts to refloat the ship on Sunday, with experts pinning hopes on a high tide to help dislodge the ship.

As of Monday morning, some 367 ships were waiting to travel through the canal, including dozens of container vessels, natural gas tankers as well and ships carrying livestock, according to Leth. 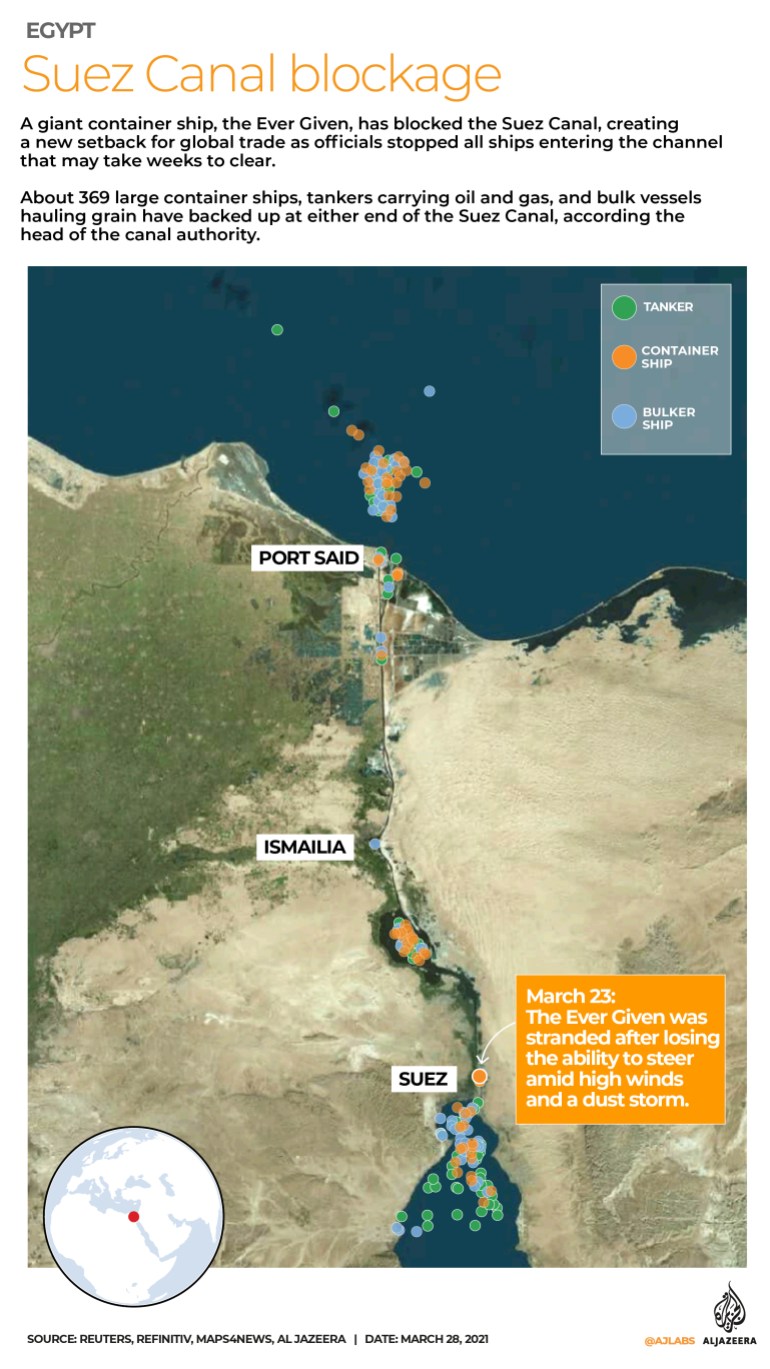