New photos has emerged of migrants, including women and children, crammed together in detention facilities at the United States border has increased pressure on the administration of President Joe Biden over his immigration policy amid a sudden surge in arrivals to the US.

Images from the processing centre at Donna in Texas showed people lying on the floor under foil emergency blankets and separated into groups by plastic sheeting while waiting for their documents to be assessed.

They were taken by Democratic Congressman Henry Cuellar, who has been pressing the Biden administration to address the recent influx of migrants and provided to the Reuters news agency.

The Biden administration is under pressure to address an emerging humanitarian situation at the border with Mexico as thousands flee violence, natural disasters and economic hardship in Central and South America. The Democratic president has promised a more humane immigration policy than his predecessor Donald Trump, sparking an influx to the border as some migrants risk the journey in hope of a less hardline approach.

As a result, US authorities have struggled to house a rising number of arrivals – and unaccompanied children. The Donna facility was opened last month to provide temporary shelter to them while a permanent building was under renovation.

There were more than 5,000 unaccompanied children in crowded border facilities as of Saturday, according to government data seen by Reuters.

Under a new programme managed by non-profit organisations, the administration aims to allow some migrant families to be housed in hotels, two people familiar with the plans told the Reuters news agency.

Under the scheme, Endeavors, a San Antonio-based organisation, will oversee what it calls “family reception sites” at hotels in Texas and Arizona, the two sources said.

The organisation, in partnership with other nonprofits, will initially provide beds in seven different brand-name hotels for families deemed vulnerable when picked up at the border.

Tae Johnson, the acting director of US Immigration and Customs Enforcement (ICE), said the agency had signed a short-term, $86.9m contract with Endeavors to provide temporary shelter and processing services for migrant families. The contract provides 1,239 beds and other necessary services, he said in a statement.

The opening of the reception centres would mark a significant shift by the administration of Biden, a Democrat, away from the detention of migrant families in for-profit facilities.

In January, Biden issued an order directing the Justice Department not to renew its contracts with privately-operated criminal detention facilities. However, the order did not address immigration jails run by ICE.

Roughly 1,200 migrants were being held in two family detention centres in Texas, according to an ICE spokeswoman. A third centre in Pennsylvania is no longer being used to hold families.

The influx of thousands of migrants has provided an opening to Biden’s rivals, who struggled to find an angle of attack after he successfully ramped up the coronavirus vaccination campaign.

Republicans have accused the new president of creating chaos at the border encouraged by a naive approach to immigration.

“Despite your administration’s refusal to admit this is a crisis, the American people are beginning to understand the gravity of the situation,” said Republican Senator Ted Cruz, announcing he would visit the border this week with 14 of his colleagues.

Cruz accused the White House of “hiding the truth” by preventing journalists from visiting border facilities, particularly those holding children.

The hotel sites are expected to open in April and will offer COVID-19 testing, medical care, food services, social workers and case managers to help with travel and onward destinations, according to the two sources, who requested anonymity. Staff will be trained to work with children.

The families will arrive at Border Patrol stations and then be sent to the hotel sites to continue immigration paperwork, the two sources said. They could leave the reception centres as early as six hours after arrival if paperwork is completed, they test negative for COVID-19 and transport has been arranged.

‘Our border is not open’

Biden officials have said migrant families will be “expelled” to Mexico or their home countries under a Trump-era health order known as Title 42. But more than half of the 19,000 family members caught at the border in February were not expelled, with many released into the United States.

“Our border is not open,” ICE’s Johnson said in the statement.

More has to be done to address this growing humanitarian crisis.

“The majority of individuals continue to be expelled under the Centers for Disease Control’s public health authority.”

In an interview with Al Jazeera, Ariel Ruiz of the Migration Policy Institute in the US, however, said that it would be “unrealistic” to expect that all migrants will stop coming.

Ruiz also pointed out that the number of people coming in is still lower than the level in 2019, although the trend is rising.

Endeavors will also operate a new 2,000-bed shelter for unaccompanied children in Texas, the sources said.

The new family and child facilities are expected to ramp up bed capacity gradually, the people familiar with the effort said. US to turn back ‘vast majority’ of migrants at Mexico border

President Joe Biden has left in place a Trump-era order that allows US authorities to expel migrants to Mexico. 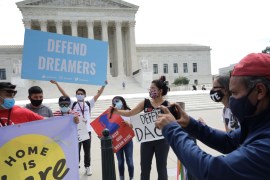 The future of the Democrats’ bill offering protection to undocumented children is uncertain, at best, in the US Senate. 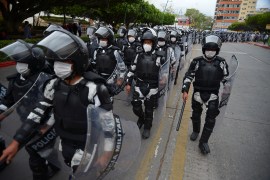 Mexico dispatches troops to southern border to rein in migrants

Citing the need to stop the spread of the coronavirus, Mexico is restricting all but essential travel with Guatemala.