Vote counting is under way in the Republic of the Congo’s presidential election that could see veteran President Denis Sassou Nguesso extend his stay to almost 40 years.

More than 2.5 million voters registered to take part in Sunday’s election which Nguesso, 77, is widely expected to win against six contenders.

The election took place with the president’s main rival, former government Minister Guy-Brice Parfait Kolelas, in hospital, reportedly with COVID-19. Reports said Kolelas, who finished second in the 2016 election, could be evacuated to France for medical treatment.

“The government’s information minister told us that they did the same during the last election [in 2016] because they had information about a threat of an armed insurrection. But rights groups have said it is because the government is trying to hide what it’s doing,” Webb said.

There was also a heavy presence of security forces on the streets of Brazzaville as voters went to the polls.

“Soldiers are out on the streets, the roads are closed,” Webb said. “No one is allowed to drive around. People are only allowed to move around by foot.”

Turnout appeared light in Brazzaville throughout the day. Poll workers began to count ballots shortly after voting ended at 6pm (17:00 GMT). Results are expected to be released within five days. If none of the candidates secures more than 50 percent of votes, a second round will take place 15 days later.

Webb said independent observers were blocked from monitoring the vote count, while rights activists alleged they had been targeted for criticising the electoral process.

“Today, we’ve seen many different kinds of issues that people were complaining about, including dead people on the electoral register and other people’s names completely missing,” Webb said.

Nguesso, a former paratrooper, first rose to power in 1979 and has since accumulated 36 years in office, making him one of the world’s longest-serving leaders.

He is hoping for a first-round victory to secure a fourth term running the oil-producing central African country of five million people.

“I am very satisfied because across the country, I have seen people mobilised and ready to participate in the electoral process,” Sassou said after voting, adding that he wished Kolelas a swift recovery.

The opposition candidate had posted a dramatic online video showing himself in a bed, declaring he was “battling against death” after taking off a respiratory mask.

“Rise up as one person … I’m fighting on my deathbed, you too fight for your change,” Kolelas had urged supporters, saying the election was “about the future of your children”, before replacing his mask.

In late January, the Pan-African Union for Social Democracy (UPADS), the country’s main opposition party, said it had decided not to field a candidate in the election, arguing conditions were not conducive for polls and that an election would only lead to more divisions in the country.

Instead, UPADS – the party of former president Pascal Lissouba – proposed a transitional period and polls in 2023, with long-serving Nguesso not on the ballot.

The Catholic Church has also raised questions about the fairness of the vote after the government rejected its request to deploy more than 1,000 election observers.

“On paper, it is a democracy, since 1991. But in reality, with such behaviours, we need to question ourselves if really we are in a democracy,” Father Felicien Mavoungou told Al Jazeera.

Mavoungou was meant to be part of a team observing Sunday’s presidential election but he told Al Jazeera all church observers have been blocked from monitoring the polls. 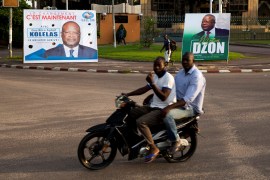 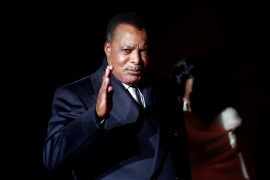 Longtime president expected to see off challenge from six other candidates and win Sunday’s vote. 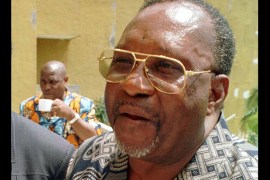 Yhombi-Opango, who was ill before contracting the virus, has died in a Paris hospital, according to his family.