Eva Garcia’s nerves were frayed after she heard false rumours that COVID-19 vaccines were dangerous. But the 35-year-old California farmworker, who had tested positive for and recovered from the virus herself earlier this year, decided that getting the vaccine was the right thing to do.

The jab, she reasoned, would protect her, her husband and their children. Garcia, who is undocumented and has no access to healthcare in the United States, received a Moderna shot on March 2 at a mobile clinic set up at the farm where she harvests parsley.

“I had COVID, I survived it, and I’m a lot happier knowing I’m protected,” she told Al Jazeera over the phone through a translator.

The US Centers for Disease Control and Prevention (CDC) recommended that states prioritise agricultural workers in phase one of their vaccination campaigns. California, the top agricultural producing state in the country, did just that – making Garcia one of the first farmworkers in the US to be inoculated.

In late February, Governor Gavin Newsom visited Fresno in the Central Valley, one of the state’s top agricultural centres, to announce new mobile clinics and outreach for farmworkers.

“It’s not just Californians who benefit, it’s the folks all across this country and around the world.”

When COVID-19 spread to North America, agricultural workers were one of the hardest-hit groups.

As of February 23, more than 387 farms and production facilities in the US have had confirmed COVID-19 cases, according to a report from Food Chain Workers Alliance, a coalition of workers’ groups. In these workplaces, at least 12,857 farmworkers have tested positive for COVID-19 and 43 have died.

But Jayson Lusk, professor and head of the department of agriculture at Purdue University, told Al Jazeera the true number of cases is likely much higher: He estimates there have been 543,000 cases among farmworkers in the last year, and 9,000 workers have died.

Lusk’s data shows Texas and California had the most cases due to their high populations of farmworkers. The Center for Farmworker Families advocacy group estimates California is home to 500,000 to 800,000 farmworkers, about 75 percent of whom are undocumented.

Washington state followed California’s example this week, opening up eligibility to agricultural workers. But other states are neglecting this high-risk population, even as the virus continues to spread in counties with high concentrations of agricultural workers. The CDC recommendations are non-binding, leaving states to craft their own rules.

Texas has excluded farm workers from its phase one campaign. Florida, too, has a high case count among farmworkers, but requires proof of residency for vaccination, denying access to undocumented people. New York, where 3,000 farmworkers tested positive, prioritised other food service workers but left out agricultural workers.

Agricultural organisations in New York and state officials have sent letters to Governor Andrew Cuomo asking for farmworkers to be prioritised but did not receive a response, according to the news website Documented NY.

Florida’s agricultural minister has criticised Governor Ron DeSantis for not including undocumented workers in inoculation efforts, and Texas Democrats have called on Republican Governor Greg Abbott to include farmworkers, but the rules remain the same.

Beyond the human effect of COVID-19, agricultural workers are vital to the security of the global food supply, Lusk told Al Jazeera. “Making sure we have the people available to plant and harvest crops will make sure our grocery stores aren’t empty or our food prices don’t rise,” he said.

Farmworkers are more vulnerable to COVID-19 due to the nature of their work and lack of protections, said United Farm Workers (UFW) spokesperson Elizabeth Strater. They move from farm to farm as the seasons change, live in crowded housing, travel to work in packed vans and buses, and work closely together in fields and packing facilities.

They are also more likely to have severe COVID-19 cases because the work is hard on their bodies; often, they are exposed to pesticides, workplace accidents, extreme heat, and wildfire smoke. According to the Center for Farmworker Families, they are not protected by the National Labor Relations Law and are exempt from many protections under the Fair Labor Standards Act. They are also less likely to have access to healthcare.

In Garcia’s case, she was bedridden with COVID-19 for 15 days with a dry throat, dizziness and pain in her bones. Because she is undocumented, she had no access to healthcare other than home remedies.

In California, the Division of Occupational Safety and Health (Cal/OSHA) promised to uphold COVID-19 guidelines, but a recent survey by the California Institute for Rural Studies found that the agency failed to enforce COVID-19 rules.

Farmworkers said they continued to experience overcrowded rides to work, and employers laughed at them when they requested masks. Responding to the report, Cal/OSHA told Calmatters it is proactively reaching out to essential workers, and agriculture is the only industry where the number of inspections the agency conducts exceeds the number of complaints.

But agricultural workers are paid by the unit of produce they harvest, which also encourages them to work in unsafe conditions. “If they’re not feeling well, there is an economic desperation that cannot be overstated,” Strater said. “They will work.”

Despite Garcia’s hesitancy, Strater said most farmworkers want to be vaccinated.

The United Farm Workers Foundation surveyed more than 10,000 farm workers about the vaccine and found 73 percent were willing to receive it, 22 percent were neutral and only five percent said they did not want it.

There are still barriers, however. Slater said filling out online forms can be tough due to language barriers, and undocumented people may feel unsafe providing information to the government. To combat any remaining hesitancy, UFW is calling and messaging thousands of farmworkers to sign them up for vaccine clinics.

The group also set up a vaccination clinic at The Forty Acres national historic landmark in Delano, California – the site of an international grape boycott and strike in the 1960s, and land that labour leader Cesar Chavez acquired as a spiritual centre for the agricultural workers’ movement.

Slater said approximately 3,000 workers have been vaccinated at the site in the last week.

On March 14, Baldomero Perez, 45, received his first and only shot of the Johnson & Johnson vaccine. Perez, who harvests blueberries, grapes and mandarins, felt reassured when he heard he would be vaccinated at The Forty Acres, which feels like home to farmworkers.

He was so excited that he brought his sister-in-law and brother, also agricultural workers, to get their shots, too. “It was emotional to be there,” Perez said over the phone through a translator.

“I don’t have the legal right to be here, but I have a UFW union ID and that’s enough at Forty Acres,” he said. Other California vaccination sites require photo ID (though it does not need to be government-issued), proof that the person lives and works in the county, and proof that they are an agricultural worker.

Meanwhile, Garcia will receive her second dose on March 30. She and her husband, who had also tested positive for COVID-19, feel more at ease now that they’re vaccinated, but she said they will continue to take precautions, including wearing masks and avoiding large groups.

“We’ve all been really scared,” she said, about the past year. Now, she said, “I’m looking forward to being safe with the vaccine.” 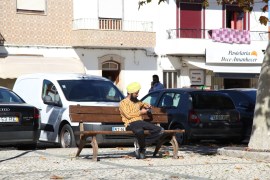 Agricultural labourers from India, Nepal and Pakistan work in greenhouses during the day and learn Portuguese at night. 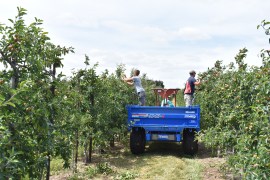 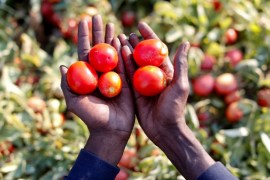 Thousands of undocumented migrants to get Italian work permits 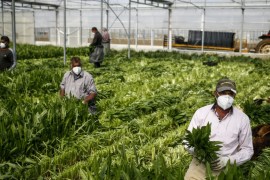 Without rights for farm workers, EU’s food supplies are at risk

Amid the coronavirus pandemic, the EU has to ensure labour and health protection for migrant farm workers.