Existing vaccines may protect against the Brazilian variant of the coronavirus, according to a University of Oxford study which also highlighted how a variant first found in South Africa poses the biggest headache for vaccine makers.

Coronavirus variants with specific mutations to the spike protein are of concern because scientists worry they will reduce the efficacy of vaccines, as well as immunity gained from prior infection.

The scientists used blood samples from people with antibodies generated by both COVID-19 infection and the Oxford-AstraZeneca and Pfizer-BioNTech vaccines that are being rolled out in the United Kingdom.

The data showed a nearly threefold reduction in the level of virus neutralisation by antibodies generated by the vaccines for the P.1 Brazil variant – similar to the reduction seen with the variant first identified in Kent, southeastern England.

“These data suggest that natural and vaccine-induced antibodies can still neutralise these variants, but at lower levels,” it said. “Importantly, the P1 ‘Brazilian’ strain may be less resistant to these antibodies than first feared.”

The authors of the study said developing vaccines against the South Africa variant, known as B.1.351, should be the “greatest priority for vaccine developers globally”.

Andrew Pollard, chief investigator of the Oxford University vaccine trial, said the study provided “new insights that help us be prepared to respond to further challenges to our health from the pandemic virus, if we need to do so”.

The study was released on a pre-print server and had not been peer-reviewed.

The report coincided with a flurry of developments concerning the supply of vaccine doses in the United Kingdom and other countries of Europe.

The UK health minister, Matt Hancock, on Thursday said the country was facing a squeeze on delivery of shots next month in part due to a delay in a shipment from Serum Institute of India (SII) that is mass-producing the AstraZeneca’s vaccine.

The UK has been conducting the fastest rollout of inoculations by a major economy but health officials said on Wednesday the programme would face a significant reduction in supplies from March 29.

The UK is using vaccines made by Pfizer and AstraZeneca, with 10 million doses of the 100 million ordered from AstraZeneca coming from SII.

Hancock denied rumours that the delays would mean no adults would get a first dose of the vaccine in April, but said it was important to make sure there was enough vaccine to give people a second dose within 12 weeks of their first.

He also said the UK was on target to offer everyone above 50 years the first shot by mid-April, and a shot to all adults by the end of July. He added that a road map for lifting lockdown restrictions in England was unaffected.

News of the supply shortfall coincided with a resurgence in tensions with the European Union, which is frustrated by a lack of export of AstraZeneca’s vaccine from the UK.

The EU threatened on Wednesday to ban exports of COVID-19 vaccines to the UK to safeguard scarce doses for its own citizens. The UK imports Pfizer’s vaccine from Europe.

Al Jazeera’s Neave Barker, reporting from London, said the UK government was keen to state the disruption was only a “temporary glitch” and that it remains on track to complete its vaccination drive as planned.

“[But] given the war of words between Brussels and London regarding vaccines coming from Europe there are big questions about whether this is indeed possible,” he said. 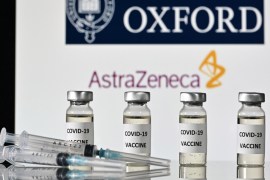 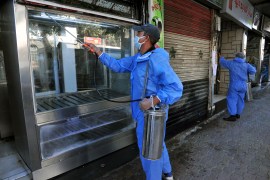 Many in Syria say it is an open secret the vaccine is Russia’s Sputnik V that had been bought by Israel. A third of the doses have been allocated for the Gaza Strip after vaccines were transferred from Tel Aviv to Ramallah. 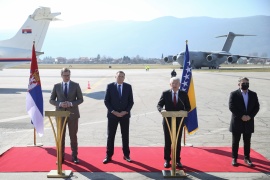