Alarm is growing in Bosnia over the escalating coronavirus crisis in the Sarajevo canton, which has recorded the highest rate of cases and deaths in the Western Balkans.

In the two weeks to March 14, the canton of Bosnia’s capital registered 1,763 cases and 31.5 deaths per 100,000 inhabitants, according to data by the European Centre for Disease Prevention and Control.

On Sunday, local media reported that 90 funerals were held in just four days in Sarajevo.

The number of daily deaths is double the high of 335 registered in March last year, an early peak of the pandemic.

“The death toll in Sarajevo in March has never – except maybe during the [1992-1995] war – been higher,” a local news website reported.

#Canton #Sarajevo is at the top when it comes to the number of #Covid19 deaths – per 100k population in the last 14 days – while rest of #BiH is doing somewhat better than only 5 #EU states and 2 #WB states. pic.twitter.com/we3ChtXJ6k

The government has been under pressure to start vaccinating its population of 3.3 million en masse, but 12 weeks after the European Union and neighbouring Serbia started their inoculation programmes, the country so far has only received some 50,000 doses – mostly from donations.

Bosnia had ordered 2.1 million vaccines under the global COVAX scheme, but deliveries have been delayed.

Adding to the crisis, there have been few physical distancing measures in place for much of the year and a lax attitude towards masks.

Indoor spaces such as cafes and clubs have been open at full capacity until recently when it became apparent that cases and deaths were spiking.

“People are waiting in line to arrange a funeral,” Zubic said.

“When everything [in Europe] was closing, we were a self-proclaimed ‘corona-free zone’. People were coming [into the country], dozens of buses from the Jahorina (skiing) mountain were coming into the city, cafes and shopping centres were open. Only schools were closed.

“Meanwhile, the government was unable to purchase vaccines … there has been no action, and people are not protecting themselves.”

Adi Cerimagic, an analyst at the European Stability Initiative based in Berlin, told Al Jazeera: “When Bosnian authorities, under public pressure amid a successful vaccination programme in Serbia and a new pandemic wave, decided to buy directly [from the distributors], it was conducted sluggishly to their own detriment and so far we are seeing bad results.”

He said that officials should have been more prepared and productive in securing and rolling out vaccines.

“It was necessary to organise experts in this field which Bosnia has [across the country] who would provide their professional support in deciding which producers should be approached, and thus increase public confidence in the purchased vaccines.”

“A second reason appears to be a degree of obstructionism, in particular by a handful of HDZ (Croat nationalist party) cadres in key positions within both the state and federation government apparatus,” Mujanovic said. “Some speculate [they] are using this situation to leverage concessions [out of] their desire for certain electoral law changes.”

Immunologist Jasenko Karamehic told the Bosnian Dnevni Avaz newspaper on Tuesday that vaccines needed to be procured rapidly for at least two-thirds of the population, or a million and a half people, to achieve collective immunity.

Smaller procurements of 20,000 or 100,000 vaccines could be counterproductive as there is no homogenous vaccination, Karamehic said.

“The state needs to start doing its job so we can achieve collective immunity because it’s not a fast process … it should have been done like Serbia and Croatia, before the new year,” he said.

“We would now have fewer people infected, less of a burden on hospitals and the healthcare system, a less devastated economy and fewer deaths. But we have an extreme number of deaths and someone should be held criminally responsible for this.”

Back in Sarajevo, the sense of grief is fresh for Arnesa Buljusmic-Kustura.

On Friday, her grandfather passed away after the entire family became infected.

Over nine days, the family sought medical help for her grandfather; his condition deteriorated quickly and he was unable to breathe properly.

But Buljusmic-Kustura said their pleas and calls were ignored.

“It was as if he was being deliberately disregarded because he was an older person. No attempts were made from anyone to give actual medical assistance,” Buljusmic-Kustura said, adding that some family members witnessed medical staff attending to other COVID patients without wearing PPE.

“There is a total collapse of the already fragile healthcare system. The virus has been around for a year and in that time absolutely nothing has been done by the authorities or the government to ensure that people are safe,” she said.

“The people of Bosnia are being left to fend for themselves and many are terrified … It’s more than a tragedy, it’s governmental and medical negligence.” 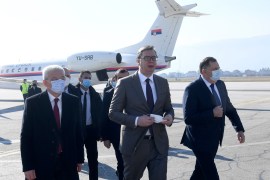 Serbia’s president flies to Sarajevo to deliver AstraZeneca vaccines amid a delay in planned shipments from COVAX. 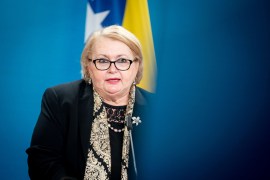 Bisera Turkovic says the EU-backed initiative has failed to deliver ‘a single dose’ to date. 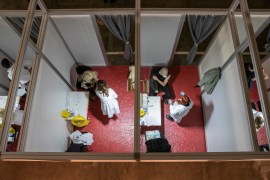 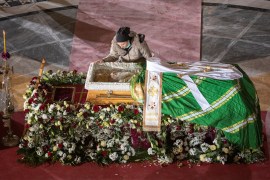 Relatives, clergy and dignitaries, including president, allowed inside church at funeral held amid COVID-19 surge.