Bulgaria has stopped using the AstraZeneca COVID-19 vaccine, joining a small number of European countries that have halted its use after reports that some recipients developed serious blood clots.

Fears over the safety of the vaccine rose on Sunday when Austria announced it had stopped using a batch of AstraZeneca shots while investigating one person’s death from coagulation disorders, and another’s illness from a pulmonary embolism.

Concerns mounted on Thursday when Denmark, Norway and Iceland said they were also suspending the use of the vaccine, jointly produced with the University of Oxford.

Bulgaria’s Prime Minister Boyko Borissov said in a statement on Friday that the use of the vaccine would be paused “until all doubts are dispelled and as long as the experts do not give guarantees that it does not pose a risk to the people”.

But the World Health Organization (WHO) and the European Medicines Agency (EMA) have expressed confidence over the vaccine’s safety and encouraged its continued rollout.

“Yes, we should continue using the AstraZeneca vaccine,” WHO spokeswoman Margaret Harris told reporters on Friday.

“There is no indication to not use it,” she added.

Harris’s comments came after the EMA – the European Union’s medicines regulator which has approved the use of the AstraZeneca vaccine in the bloc, on Thursday said its benefits outweighed the risks and could continue to be administered.

Similarly, German Health Minister Jens Spahn on Friday criticised the suspension of the use of AstraZeneca vaccine doses in some countries, saying that “the benefit … is far greater than the risk”.

Spahn said he had consulted EMA experts and could confidently state that there was no noticeable accumulation of thrombosis cases in connection with its use.

AstraZeneca, a British-Swedish multinational, said on Thursday it had found no evidence of an increased risk of pulmonary embolism or deep vein thrombosis in safety data of more than 10 million records, even when considering subgroups based on age, gender, production batch or country of use.

But Danish health authorities said they would not use the company’s jab for two weeks amid “reports of possible serious side effects, both from Denmark and other European countries”.

They did not say how many cases of blood clots were reported there, but confirmed a 60-year-old woman in Denmark, who was given an AstraZeneca shot from the same batch that was used in Austria, formed a blood clot and died.

Following Denmark’s move, Norway announced that it was also halting the use of the AstraZeneca vaccine.

Italy and Romania meanwhile announced they had separately stopped vaccinating people with one batch of AstraZeneca’s COVID-19 vaccine.

Romania said it had suspended using doses from the same batch in question in Italy.

The suspension in Austria involved a different batch of the vaccine, however. Estonia, Latvia, Lithuania and Luxembourg have also suspended the use of the batch singled out by Austria.

Sterghios Moschos, a molecular biologist at the UK’s Northumbria University, said governments were doing the correct thing to “stop and make sure everything was okay” before proceeding with further use.

“It’s an appropriate response, there is a concern that has been raised, and it needs to be looked at carefully and independently,” Moschos told Al Jazeera.

“But the likelihood, in general, that … a batch of the vaccine may have something wrong with it is very small.” 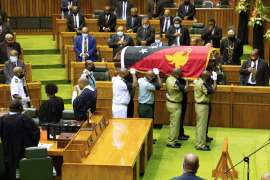 Experts say true scale of outbreak is unknown and worry crowds at funeral of former PM could exacerbate the situation. 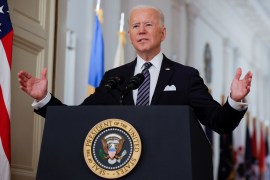 In televised address to mark a year of the pandemic, Biden acknowledged Americans’ losses and offered hope. 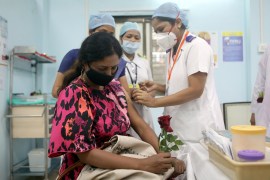 Health ministry reports 23,285 new cases in the past 24 hours as Maharashtra state battles a resurgence. 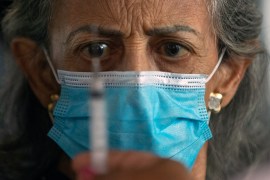 According to a UK media group, drugmaker Pfizer held Argentina and Brazil ‘to ransom’ with ‘shocking’ demands.