Tensions between Armenian Prime Minister Nikol Pashinyan and the country’s army reignited on Wednesday, with the leader under continued pressure over his handling of last year’s conflict over Nagorno-Karabakh with Azerbaijan.

Pashinyan, the embattled leader who has faced a wave of anti-government protests in recent weeks, said on Wednesday that Onik Gasparyan, the army’s chief of the General Staff who earlier joined calls for him to resign, has been relieved of his duties, according to Russian news agency RIA.

Pashinyan announced the move in a statement published on a government website, days after Armenian President Armen Sarkissian refused to sign the premier’s draft decree to dismiss Gasparyan.

The statement said the because Sarkissian had not sent documentation pertaining to his rejection of Gasparyan’s dismissal to the Constitutional Court, the chief of staff was therefore automatically “relieved of his post from March 10 [Wednesday] by force of law”.

Pashinyan, in power since 2018, had accused Gasparyan of leading a coup attempt after he called for the leader’s resignation.

Gasparyan accepted his dismissal reluctantly, saying he would appeal against Pashinyan’s decree to fire him.

“In order to ensure the supremacy of the constitution and law in Armenia … I appealed to an administrative court,” Gasparyan said in a statement.

“I will continue my service to the motherland and the Armenian people in a different status,” he said, adding that the “resolution of the current crisis will only be possible if the prime minister resigns and snap polls are held.”

The prime minister has been under increasing pressure to step down following the latest conflict over the Nagorno-Karabakh region, which saw Armenia suffer heavy losses and agree to return swaths of territory to Azerbaijan.

Last month, large protests flooded the streets of the capital Yerevan – some came out against the PM but many others heeded Pashinyan’s call to rally in support of the government.

The dispute with top generals began when Pashinyan fired the deputy chief of the general staff after he ridiculed claims by the prime minister that Iskander missiles supplied by Russia – Armenia’s main military ally – had failed to hit targets during the war for Nagorno-Karabakh.

Pashinyan issued a subdued retraction on Monday, with his office saying he had been “incorrectly briefed on this matter” and had no doubts about the quality of Russian military production.

The Russian-brokered deal that ended the conflict secured significant major gains for Azerbaijan in and around Nagorno-Karabakh, a region internationally recognised as part of Azerbaijan but populated and until recently fully controlled by ethnic Armenians.

Thousands of soldiers and dozens of civilians on both sides died during the war.

Pashinyan, who has rejected calls to resign, said he had been compelled to agree to the peace deal to prevent greater human and territorial losses. 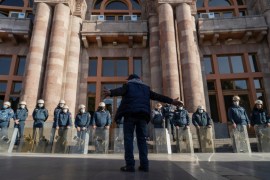 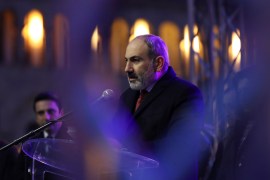 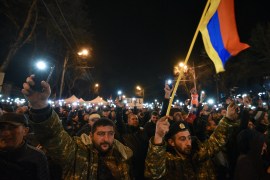