Turkey might be willing to refrain from the full deployment of the Russian air defence system whose purchase led to United States sanctions, according to the country’s defence minister.

The US wants Turkey to decommission the S-400 missiles, which were originally built to target NATO hardware and acquired by Ankara in July 2019. The purchase has put extra strain on US-Turkey relations, which have also been complicated by the conflict in Syria.

Hulusi Akar said in an interview published by the Hurriyet daily on Tuesday that he was open to a compromise similar to the one Greece reached following its purchase of Russia’s older S-300 defence system. Greece bought the missiles and placed them on the Greek island of Crete in the late 1990s to defuse a crisis between Turkey and Cyprus, where the internationally recognised Greek Cypriot government had initially ordered the missiles and eventually conceded them to the government in Athens.

“We’ve said this before, whatever the model used for the S-300 on Crete, we’re open to negotiating,” Akar said.

“It’s not as if we’ll always use them. These systems are used according to the state of threats. We will make decisions based on that,” the minister said when told by the paper that the Greek S-300s are “not always operational”.

Separately, Bloomberg on Tuesday cited two Turkish officials familiar with relations between Turkey and the US as saying that Ankara is prepared to make concessions, because it is eager to secure the future supply of spare parts for its US-made weapons systems and avoid damage to its economy.

The Turkish government is also keen to prevent the US from further strengthening Syrian Kurdish YPG fighters that dominate the US-backed forces that helped quell the ISIL (ISIS) armed group in Syria, the officials told Bloomberg on condition of anonymity to discuss strategic issues.

‘The most sensitive issue’

Turkey considers the YPG a “terrorist” group that is linked to the Kurdistan Workers’ Party (PKK), which has waged war on Ankara for decades and is classified as a “terrorist” organisation by the US and the European Union.

“The most sensitive issue in our relations with the US is the country’s support to the YPG, the PKK’s arm in Syria,” Akar told Hurriyet.

The US responded to the purchase of the S-400s by Ankara first by suspending Turkey’s involvement in the F-35 fighter jet programme before hitting Turkey’s military procurement agency with sanctions in December.

Although Akar has urged dialogue to resolve the issue, Turkish President Recep Tayyip Erdogan last month said talks with Russia on a second batch of the missiles were set to continue. 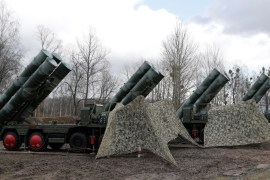 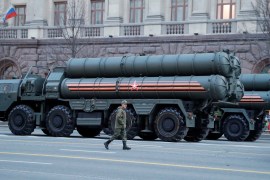 Turkey condemns US move, calling it a ‘grave mistake’ and threatens to retaliate as necessary. 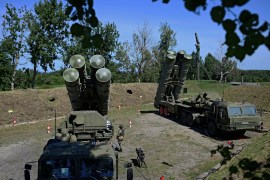 Turkey urges ‘review’ of US sanction decision over S-400s

Sanctions deepened a rift between the two NATO allies which have been at odds over a variety of issues.