The relatives of an Australian economic adviser to Myanmar’s deposed civilian leader Aung San Suu Kyi say they are “distraught” over his detention in the wake of a military coup, as Canberra seeks immediate access to the academic.

In a statement released by Australia’s foreign affairs department late on Monday, the family said they were “distraught” that Turnell had been detained.

“He is a practical economist who has and will always use his expertise and experience for a good cause,” the statement said.

“Myanmar is a country with which he has fallen in love, and through working on and for it for more than two decades, he brought jobs, investment, and hope to many of the poorest people there without thought of reward or concern for his own advantage.”

His wife, Ha Vu, who posted the same message to Facebook, called for Turnell’s immediate release.

“He is warm and kind-hearted, generous, and always thinks about others before himself,” the statement said.

“Even now, wherever he is confined, we know that his thoughts and concerns are with those worrying about him.”

Ha Vu appealed to the media for privacy as their family in Australia and Vietnam deal with the situation, and try to secure his release.

Foreign Minister Marise Payne said on Monday that the Australian government would continue to “press strongly” for Turnell’s release, after she summoned the Myanmar ambassador over the case.

She said the country was “deeply concerned” about the situation in Myanmar and was providing consular assistance to a number of Australians.

The Australian government is seeking immediate access to Turnell, who is believed to be in a police facility.

A source close to Turnell, who spoke to the Reuters news agency on condition of anonymity, said he had been to the police station where the economist was originally detained, and was told he had been moved to Insein prison in Yangon.

But when he went to the prison to deliver a care package, officers said he was not there.

“We all know that wherever he is now he will be worried,” Vu said in in a separate statement.

Turnell had told Reuters before his detention on Saturday that he expected to be charged following his detention.

“I guess you will soon hear of it, but I am being detained,” Turnell said. “Being charged with something, but not sure what. I am fine and strong, and not guilty of anything,” he said.

Street protests have been going on across Myanmar in the last three days denouncing the military for staging the February 1 coup.

In response to the enormous protests, Senior General Min Aung Hlaing, the new military ruler imposed a curfew on Monday in the country’s two biggest cities and banned gatherings of more than five people.

In a televised address to the nation, he called on the public to prioritise facts and not feelings and repeated the unsubstantiated claim that there were irregularities in November’s election. 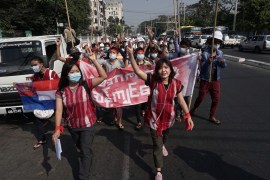 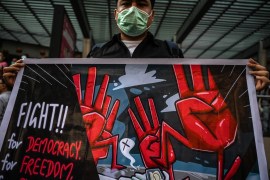 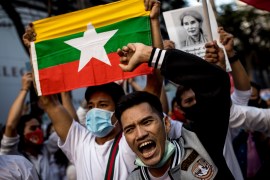