An inmate revolt at a Saint Louis jail criticised for the conditions under which inmates are housed has caused advocates and legislators to reiterate calls for government transparency and increased protections for inmates as the COVID-19 pandemic continues.

More than 100 inmates took over two units of the City Justice Center (CJC), a city-run jail, at about 2:30am (7:30GMT) on Saturday morning, setting fire and breaking windows. It was the third protest over COVID-19 protocols and conditions inside the jail since December.

“They are demanding proper heat, they want proper [personal protective equipment], proper clothing and they want proper visits from their families”, Tracy Stanton, an activist with St Louis’ branch of Ex-incarcerated People Organizing (EXPO), said during a Sunday press conference.

HAPPENING NOW: Inmates are rioting at the STL city jail downtown. The mayor is calling this a dangerous ongoing disturbance. @ksdknews pic.twitter.com/J5NI3mK2Rd

The inmates controlled portions of the jail for roughly six hours before law enforcement retook control. One guard was injured, and those involved were transferred out of the jail.

Latrell Stanton, who is also with EXPO, said CJC faced criticism before COVID-19, but the pandemic amplified these concerns.

He claimed Missouri has done little to improve conditions inside jails to stop the pandemic’s spread.

According to Missouri state numbers, there are no current COVID-19 cases inside the jail and St Louis Director of Public Safety Jimmie Edwards told media the men “were just very angry, defiant, very violent people that we house at the Justice Center”.

Random testing of 10 percent of the population of each facility’s population continues, as well as analysis of wastewater to identify any possible outbreak, according to the Missouri department of corrections. It said those inmates who test positive are isolated until they test negative.

But Mike Milton, an advocate with the Bail Project, said at the press conference that CJC inmates, who are in pre-trial detention and presumed innocent, “fear for their lives”.

@MikeAMilton314– people in CJC and the Workhouse have talked about fearing for their safety & fearing for their lives. A man, detained pretrial for 3 years, lost his home & was separated from his children. He didn't go in front of a judge for a year. This system is designed to

The Bail Project has received numerous concerns from inmates over visibly ill inmates and a lack of PPE.

Similar concerns have been raised in prisons across the US,  Milton said.

Decarceration is presumed to be an effective means of limiting COVID-19 inside crowded correctional facilities, where inmates and guards have trouble social distancing.

For example, California’s Santa Rita Jail experienced an outbreak in March 2020 and began releasing inmates, decreasing its inmate population about 30 percent from 2,497 on March 1 to 1,805 on June 25.

While data appears to show depopulating prisons and jails is an effective means of reducing COVID-19, an August report from the Prison Policy Initiative shows most states have not taken steps to adopting this tactic.

There have been at least 372,583 cases and 2,359 deaths inside correctional facilities in the US, according to a tally by the Marshall Project.

As cases rise across the US, advocates and legislators are calling for increased accountability in the corrections system.

Missouri Representative Cori Bush said in a statement the US has “an incarceration crisis. To date, 1 in 5 incarcerated people nationally has tested positive for COVID-19, including many across the City of St. Louis.”

She continued: “I am calling for complete transparency and accountability from the city of St. Louis. Officials must publicly disclose the city’s COVID-19 testing protocols, case rate and hospitalization data, vaccination plans.”

Advocates like Latrell and Tracy Stanton pushed for policymakers to listen to prisoners when calling for solutions. 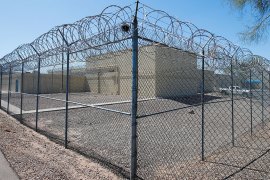 Thousands of people held in US jails have not been convicted of current charges but still face COVID-19 threat. 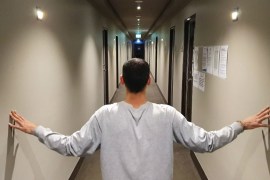 Confined to one floor of a suburban hotel that remains open to guests, detainees worry about the risk of disease. 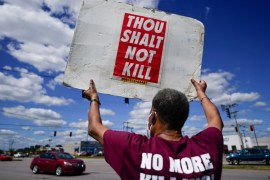 Advocates across the political spectrum call on Trump to commute Bernard’s sentence, citing issues with trial, his age.