Guatemala City – Survivors of genocide and other crimes against humanity during Guatemala’s civil war are calling for justice as pending trials against ex-military officials stagnate in court.

Indigenous survivors and relatives of victims marched on Thursday in Guatemala City to commemorate the National Day of Dignity for Victims of the Internal Armed Conflict, demanding the government uphold its commitments to peace and justice.

“This day carries so much meaning. It honours our dead,” said Rigoberta Menchu, an Indigenous Maya K’iche human rights activist and winner of the 1992 Nobel Peace Prize.

“For many, many years we have struggled for the recognition of victims,” Menchu, whose father was killed in a 1980 massacre, told Al Jazeera.

A civil war between leftist guerrilla forces and the Guatemalan military from 1960 to 1996 left an estimated 200,000 people dead and another 45,000 people disappeared. More than 80 percent of victims were Indigenous Maya civilians.

Military forces were responsible for 93 percent of killings, according to a United Nations-backed truth commission. The Commission for Historical Clarification determined state actors committed acts of genocide, and Guatemalan courts have since come to the same conclusion.

The commission presented its report on February 25, 1999, and the date was later recognised as the annual day of dignity for victims. The report helped pave the way for investigations and exhumations that led to the prosecution of high-level former military officials.

Over the past decade, domestic Guatemalan courts have issued landmark rulings on genocide, sexual slavery and other crimes against humanity. But pending cases and trials for genocide, mass enforced disappearances and other civil war-era atrocities are stagnating in the courts.

“Little by little they want to shut down all the cases,” said Menchu. “There are major latent setbacks in the administration of justice.”

Victim and survivor movements did celebrate a recent important victory, however. The Constitutional Court ruled earlier this month against an amnesty bill that would have freed perpetrators of crimes against humanity.

More than 50 associations of victims, survivors and relatives are still waiting on the Constitutional Court to rule on their challenges to Guatemalan President Alejandro Giammattei’s closure last year of three institutions designed to uphold government commitments stemming from the 1996 peace accords.

“To date, there has been no response,” Feliciana Macario, a representative of CONAVIGUA, a human rights organisation led by Maya women whose relatives were killed or disappeared, told Al Jazeera.

A delegation from the associations attending on Thursday presented a document to the Constitutional Court, urging the court to rule on the issue. The march then continued on to the Office of the Human Rights Ombudsman, to express support for the ombudsman, before ending outside Congress.

The president’s office did not respond to Al Jazeera’s request for comment on the demands.

Jose Yos was born years after the war ended, but he participated in the march to honour his grandfather. The 19-year-old travelled on Thursday to the capital with his mother and sisters from their home in Santa Lucia Cotzumalguapa, 95 kilometres (59 miles) southwest of Guatemala City.

“My grandfather was a martyr,” Yos, who is named after his grandfather, told Al Jazeera. “He fought for human rights and for better pay.”

In the late 1970s, the elder Yos and other sugarcane harvesters in the Escuintla department began organising with the Campesino Unity Committee. Some of them later joined committee members from other regions in Guatemala City to protest against abductions and killings by the army, and on January 31, 1980, they occupied the Spanish Embassy.

A fire broke out during a police raid and 37 people – eight Spanish diplomats, including the consul, and 29 civilians, including Menchu’s father and Yos’s grandfather – burned to death.  More than 40 years later, their relatives continue to take action with survivors of atrocities from around the country.

“I feel uplifted here because there is a kind of unity with other relatives of victims,” said Yos. “What we seek is justice.” 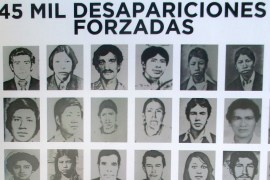 Day of the Disappeared: ‘The pain never ends’ in Guatemala

An estimated 45,000 people were disappeared during the 36-year civil war in Guatemala. 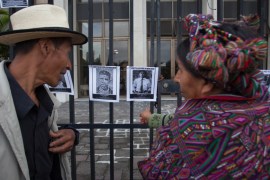