At least 7,000 people who fled escalating ethnic violence in western Ethiopia have sought asylum in neighbouring Sudan, the United Nations refugee agency (UNHCR) has said, amid heightened tensions between the two neighbouring countries.

Violence in the Metekel Zone of the Benishangul-Gumuz region is separate from the deadly conflict in Ethiopia’s northern Tigray region, which has sent more than 61,000 Ethiopians into Sudan’s provinces of al-Qadarif and Kassala since fighting erupted in November.

The UNHCR said on Tuesday most of the 7,000 asylum seekers who fled Metekel have been living among Sudanese host communities. It said it was working with local authorities in the Blue Nile province to respond to the humanitarian needs of the newly arrived, many of whom have arrived in hard-to-reach places along the border.

“The situation [in Metekel] has rapidly escalated in the past three months,” Babar Baloch, UNHCR spokesman, told reporters in Geneva. “The stories the refugees are bringing – they are fleeing attacks from their opponents,” Baloch said. 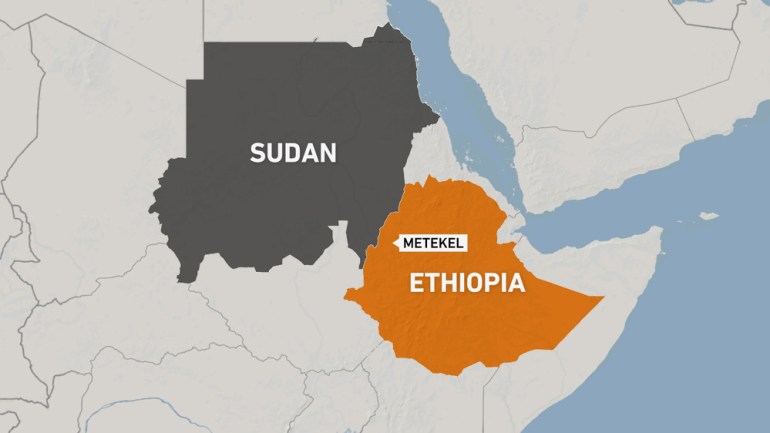 The Ethiopian Human Rights Commission said more than 180 people were killed in separate massacres in Metekel in December and January.

Amnesty International reported in December that members of the ethnic Gumuz community – the ethnic majority in the region – attacked the homes of ethnic Amhara, Oromo and Shinasha.

Ethnic violence poses a major challenge to Ethiopian Prime Minister Abiy Ahmed as he tries to promote national unity in a country with more than 80 ethnic groups.

Amharas are the second most populous ethnic group in Ethiopia and they have been targeted repeatedly over the last year. Fighters from Amhara, however, have been accused by witnesses of carrying out atrocities along with Ethiopian and Eritrean forces in the Tigray conflict.

The new influx of refugees into Sudan comes amid tensions between Addis Ababa and Khartoum over a border dispute and the deadlocked talks over a massive dam Ethiopia is building on the Blue Nile, the main tributary of the Nile River.

Separately, a European Union envoy warned the crisis in Tigray appears “out of control”, after visiting Ethiopia on behalf of the bloc.

Abiy, the winner of the Nobel 2019 Peace Prize, declared victory after federal forces entered the regional capital of Mekelle in late November, though the TPLF pledged to fight on and clashes have persisted in the region, hampering efforts to deliver humanitarian assistance.

“You have come to the situation which is militarily and human rights-wise, humanitarian-wise very out of control,” Finland’s Foreign Minister Pekka Haavisto told journalists in Brussels, a day after briefing the bloc’s ministers on the crisis.

“This operation has lasted more than three months, and we do not see the end,” Haavisto said.

Haavisto, who met Abiy during his visit to Addis Ababa this month as part of a fact-finding mission, said Ethiopia’s leadership had failed to provide a “clear picture” of the situation in Tigray – including the widely documented involvement of forces from neighbouring Eritrea.

“The question of Eritrean troops is extremely sensitive, so we don’t get the clear answer about the whereabouts or magnitude of the Eritrean troops,” he said.

Addis Ababa and Asmara both deny that Eritrean forces are involved in the conflict, contradicting witness reports from civilians, aid workers and some military and government officials in Tigray. The EU has joined the United States in demanding Eritrean troops withdraw.

Haavisto also warned that Sudan is struggling to cope with the influx of people fleeing the fighting and said it risked creating a major refugee crisis.

“We are seeing the beginning of one more potentially big refugee crisis in the world,” Haavisto said. “If you don’t influence it now then the circumstances will build so that there are more and more refugees coming.”

Haavisto repeated urgent calls from the international community for the Ethiopian government to grant full humanitarian access to Tigray, including areas beyond its control.

The UN says that areas where 80 percent of the region’s population live remain cut off from assistance. It has also sounded the alarm over a “very critical malnutrition situation” unfolding in the Tigray region, citing continuing insecurity, bureaucracy and the presence of “various armed actors” as major obstructions to the efforts to deliver life-saving aid.

“Despite some progress, the humanitarian response remains drastically inadequate compared to the sheer magnitude of needs across the region,” the UN’s Office for the Coordination of Humanitarian Affairs (OHCA) said in a report on Saturday.