A 12-person jury has been seated in the Georgia trial of three white men charged in the killing of 25-year-old Ahmaud Arbery, but the makeup of the panel is already raising questions of fairness in the proceedings.

Arbery, who is Black, was fatally shot after he was chased by the three men, father and son Greg and Travis McMichael and neighbour William “Roddie” Bryan, in February of 2020. The trial has been seen by many as the latest referendum on racial justice in the United States.

The appointment on Wednesday of just one Black juror and 11 white jurors following a three-week selection process quickly raised concerns among prosecutors and Arbery’s family.

On Wednesday, Thea Brooks, Arbery’s aunt, called the composition of the jury “just another of the injustices that we see here in Glynn County”.

Arbery’s mother, Wanda Cooper-Jones, called it “devastating”, but maintained the evidence was strong enough to convict the trio regardless of the race of the jury.

Superior Court Judge Timothy Walmsley approved the jury, as well as four alternates whose race was not immediately known.

That came after prosecutor Linda Dunikoski argued in an at-times heated debate that the defence lawyers had struck eight Black potential jurors because of their race. In the US, it is unconstitutional to dismiss a juror, who must be agreed to by both the prosecution and the defence, solely based on race.

In a particularly ostentatious moment, Judge Walmsley also said on Wednesday that there appeared to be “intentional discrimination” by the defence lawyers in shaping the jury.

However, he said his ability to intervene was limited by Georgia law as the lawyers were able to provide non-racial reasons for the dismissals.

“In this particular case, there are these significant overtones of race to begin with,” the judge said. “The court is not going to place upon the defendants a finding that they are … not being truthful with the court when it comes to their reason for striking the jurors.”

Arbery had gone for a run in the residential neighbourhood of Satilla Shores when the McMichaels and Bryan began chasing him in their trucks on February 23, 2020.

The trio have said they suspected Arbery in a string of burglaries in the area, and were trying to detain him under the state’s citizen’s arrest law, which has since been repealed amid outrage over the killing.

After the men chased down Arbery, Travis McMichael fatally shot him. The defendants have maintained the killing was in self-defence.

No one was charged in Arbery’s death for more than two months, until the video of the shooting, taken from Bryan’s truck, leaked online.

That’s when the Georgia Bureau of Investigation took over the case from local police and soon arrested all three men on charges of murder and other crimes. They have all pleaded not guilty.

The former district attorney of Glynn County, Jackie Johnson, has also since been charged with violating her oath of office and obstructing law enforcement for her handling of the incident. Greg McMichael had previously worked as a Glynn County police officer and as an investigator with Johnson’s office.

On Thursday, Judge Walmsley is set to hear final arguments about what evidence can be shown to the jury.

Prosecutors are expected to present evidence during the trial that Travis McMichaels used a racial slur after shooting Arbery.

Prosecutors had previously read in court text messages McMichaels had sent to friends in which he used racial slurs.

The defence has also requested that a photo showing Travis McMichael’s licence plate, which was emblazoned with Georgia’s old state flag with the Confederate battle emblem, be barred from being shown during the proceedings.

There has not been a ruling yet on the request. All three defendants have also been charged with separate federal hate crimes charges.

Then on Friday, Judge Walmsley will swear in the juror and hear opening arguments.

The trial will largely hinge on interpretation of the citizen’s arrest law the McMichaels and Bryan have claimed justified their actions.

The law, which was almost 150 years old when it was repealed in May, permits any citizen to “arrest” a person if a crime was committed “within his immediate knowledge”.

While Arbery was captured on surveillance camera entering a construction site shortly before he was chased, he did not take anything and there is, to date, no evidence he committed a crime.

The defence has said it will also argue that Arbery tried to take McMichael’s gun, which they will portray as the act of aggression that led to the fatal shooting.

Prosecutors have maintained that the McMichaels and Bryan were the aggressors, saying their menacing pursuit of Arbery forced him to run for his safety. When he could not escape, they say, he was forced to either face the pursuers or risk being shot in the back.

They have noted that the trio did not call the police before they began their pursuit.

Glynn County is relatively small, with a population of about 85,000.

Many prospective jurors had ties to either Arbery or the defendants, or had already formed strong opinions about the case after months of social unrest and media coverage.

Judge Walmsley said on Wednesday that 25 percent of the pool of prospective jurors, from which the final jury was selected, had been Black.

The killing of Arbery in 2020 caused outrage and highlighted how Civil War-era law was used against Black people. 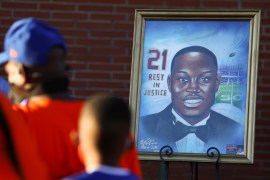 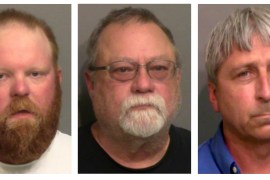 Former DA Jackie Johnson is charged with violating her oath of office and hindering a law enforcement officer.