Unidentified attackers have launched an overnight raid in Bukavu, a city in eastern Democratic Republic of the Congo (DRC), sparking deadly clashes that continued until the morning.

Gunfire was heard in several areas of the city from about 1:45am (23:45 GMT on Tuesday), but the fighting appeared to have stopped by the afternoon, according to media reports.

“The situation is under control,” Kasi said, adding that an investigation was under way to identify the attackers, who had targeted several police stations.

The region’s military commander, Bob Kilubi Ngoy, said the group had sought to free members who had been arrested by police several days earlier.

The group attacked a military base in a bid to steal ammunition but were pushed back, and then tried to head to the town centre but were also repelled, he said.

“They were desperate to free fellow members,” Ngoy said. “It was dark and we preferred to contain them to prevent too much damage,” he said, adding that the army had preferred to launch a “pincer operation” against the assailants at daybreak.

Authorities also said they took 36 attackers captive and recovered 14 weapons. Most of the captives were young, barefoot and wearing civilian clothes. 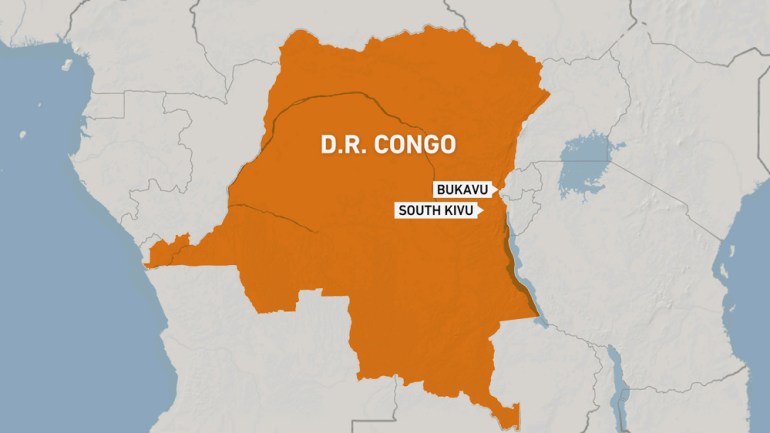 In the DRC’s capital, Kinshasa, the United Nations peacekeeping force in the country said it was in “close contact” with the authorities in South Kivu province.

“Long-range patrols have been initiated on the three main roads on the outskirts of the town, towards Walungu, Kavumu and Nyangezi,” MONUSCO spokesman Mathias Gillmann said.

More than 120 armed groups roam eastern DRC, many of them a legacy of regional wars fought a quarter-century ago.

South Kivu, which lies on the border with Rwanda and Burundi, has been badly hit by their attacks, although the overnight raid on Bukavu is the town’s biggest attack since November 2017 – when the army clashed with troops loyal to a renegade general.

Two other troubled provinces, North Kivu and Ituri, were placed under a “stage of siege” in early May – a decision that placed senior civilian posts under the control of the security forces in a bid to toughen action against armed groups.