Dearborn, Michigan – Hundreds erupted in cheers at a community centre in Dearborn as Abdullah Hammoud’s name with a checkmark next to it appeared on a giant screen, confirming that he will become the city’s first Arab-American mayor.

Soon after, Hammoud took the stage as the crowd rushed towards the podium late on Tuesday with cell phones raised to document the moment that many described as “historic”.

After his win, the mayor-elect spoke of a “new era” in Dearborn, a city known for its large Arab and Muslim community.

“To the young girls and boys who have ever been ridiculed for their faith or ethnicity, to those of you who were ever made to feel that their names were unwelcome, and to our parents and to our elders and to others who are humiliated for their broken English and yet still persisted: Today is proof that you are as American as anyone else,” Hammoud said.

He will succeed John B O’Reilly, who did not seek re-election after being diagnosed with an undisclosed illness.

When Hammoud takes office early next year, he also will become the first Muslim and the first person of colour to lead the city of nearly 110,000 residents, one of the largest in the midwestern state of Michigan.

Hammoud’s victory holds national significance, local experts have said, as it illustrates that Arab-American communities, through increased political participation, can decisively influence election outcomes and elect their own representatives to work on issues that matter to them.

“We finally have Arab Americans speaking for themselves, being elected to office, representing their communities, gaining recognition for this population, gaining a voice for them,” said Sally Howell, director of the Center for Arab American Studies at the University of Michigan-Dearborn.

From 1942 to 1978, Dearborn was run by Orville Hubbard, a mayor who openly advocated keeping ethnic communities out of the city. And as recently as 1985, mayoral candidate Michael Guido, who won the election that year, released a campaign flyer addressing what he called “the Arab problem”.

Howell, among other experts, said she estimated that well more than half of Dearborn’s population is of Arab descent, a fact not reflected by the US Census, which counts the Arab population as white, leading to undercounting.

“Finally, we’ve got an Arab American speaking for this community that is identified with Arab Americans,” Howell said of Hammoud’s victory.

Abdul El-Sayed, a public health expert who ran for Michigan governor in 2018 but fell short of winning the Democratic nomination, also said Hammoud’s victory will resonate beyond Dearborn’s city limits.

“It offers a validation on the notion that for communities like the Arab-American community in Dearborn and enclaves like it, that there is power in self-determination,” he said, “and that people born and raised in these communities have good ideas, fresh approaches and energy and enthusiasm to inspire the belief … that they can win.”

Tuesday night’s results capped months of electioneering in Dearborn. The mayoral campaign started with seven candidates, but only Hammoud and Woronchak – the top two vote-getters in an August primary – made it to the final round.

Earlier in the day, campaign volunteers – some wrapped in blankets to ward off the cold November temperatures – sat as close as they legally could to the entrances of polling stations, passing out signs and flyers.

They shouted out the names of their favourite candidates, urging passersby to vote for them.

Besides the race for mayor, Dearborn also elected a new seven-member city council and the members of a commission that will draft a new charter for the city outlining basic local governing principles.

Ayah Aldarwish, a 17-year-old high school student volunteering for Hammoud’s campaign, said no matter the winner, the city must come together to respond to pressing issues, including repeated flooding that has damaged thousands of homes across Dearborn.

Aldarwish said she felt “recognised” by the candidate. “Our voices are being heard,” she told Al Jazeera.

‘For all of Dearborn’

Woronchak, a former state representative and county commissioner, had promoted his own close ties to the Arab community during the campaign, arguing that his years of government experience made him better suited for the job than his younger opponent.

But the campaign took a turn towards identity politics in its final weeks, with Woronchak slamming Hammoud without naming him for apparently referring to Arab and Muslim Americans as “our community”.

“I think if you want to be mayor of Dearborn and you refer to our community, you should mean all of our community, not just one group or one section of town,” Woronchak said in a campaign video released in September. He also started using the slogan “For all of Dearborn”.

Hammoud told Al Jazeera last week that identity can be pluralistic, and his belonging to the Arab and Muslim communities does not take away from his ability to serve the entire city.

Howell, the academic, said the mayoral campaign took a “nastier turn” than what many observers were hoping for. She said Woronchak’s campaign slogan insinuated that his opponent could not represent the entire city, but that “it backfired on him, frankly.”

Woronchak’s campaign did not respond to Al Jazeera’s request for comment.

The son of immigrants from Lebanon, Hammoud studied epidemiology and later earned a business degree at the University of Michigan. He has said the sudden death of his older brother, Ali, in 2015 pushed him to “re-evaluate” his purpose and run for office.

In 2016, he was elected to represent Dearborn in the state House of Representatives. Over the past five years, Hammoud gained a reputation as a left-leaning lawmaker, endorsing Bernie Sanders for president in 2020 and describing himself as a “pragmatic progressive”.

Jamil Khuja, a lawyer who ran unsuccessfully for a seat on the charter commission, said it was “odd” that only candidates from minority communities face questions about their ability to serve all constituents.

He likened the attacks that Hammoud faced to right-wing theories peddled during the 2008 US presidential elections that Barack Obama would be a president for Black people only.

“It’s unfair that the minority candidate always has to convince everybody – ‘I’m going to be for everyone’ – whereas the white candidate doesn’t have to explain anything; it’s just kind of presumed that he’s going to represent everybody,” Khuja told Al Jazeera. 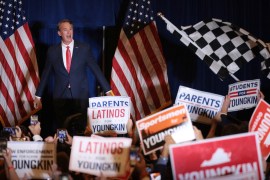 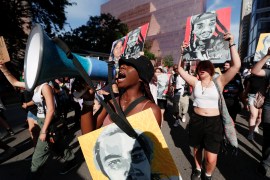 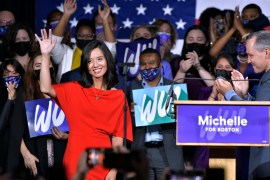 Michelle Wu and Aftab Pureval will become mayors of Boston and Cincinnati, a first for Asian Americans in both cities.