After being delayed for more than a week by protesters in Burkina Faso, a French military convoy heading to Mali has reached Niger.

Hundreds of demonstrators in the city of Kaya surrounded on November 19 the logistics trucks and armoured vehicles as they traversed Burkina Faso on their way to Mali through Niger.

The convoy, which had already been met with protests in two other cities along the route, then retreated to a camp just north of the capital Ouagadougou.

“The French convoy is in Niger,” French military headquarters spokesman Colonel Pascal Lanni told AFP news agency on Friday, adding that it resumed its journey late on Thursday under the escort of Burkinabe gendarmes.

Earlier on Thursday, the convoy had been stationed in a military area 30 kilometres (18 miles) northeast of Ouagadougou, pending the outcome of talks between the government and the protest organisers to let the trucks leave.

Their destination is a base at Gao, a hub of France’s Barkhane operation, which is shoring up allies in the Sahel region in their fight against armed groups that began in northern Mali nearly a decade ago. 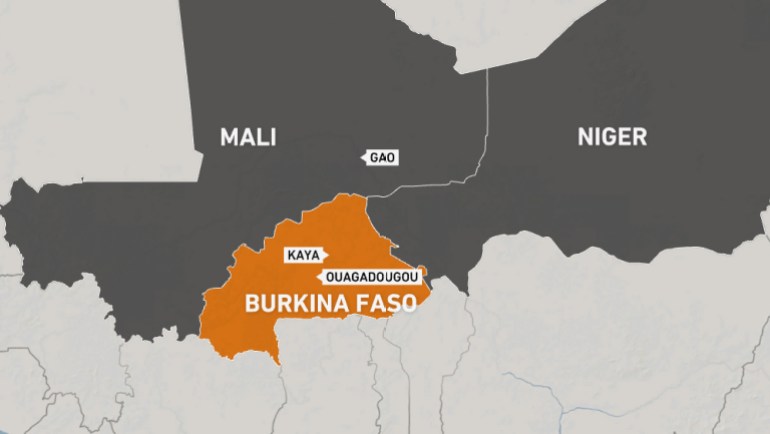 The protests’ organisers are a group called the Coalition of the African Patriots of Burkina Faso, or COPA BF. They say the demonstrations aim to expose flaws in Burkina Faso’s security accords with France.

“In spite of the accords signed with France, we continue to have more fatalities and our country is still under-equipped,” said its spokesman, Roland Bayala.

Bayala’s claim resonates with many people in the West African country who are frustrated with local and international troops for failing to contain the violence. France has thousands of troops deployed across the Sahel, where they fight armed groups linked to ISIL (ISIS) and al-Qaeda.

Three others died in a similar attack on Wednesday, and hundreds of civilians have been killed over the course of the year.

Facing growing criticism and opposition calls for renewed protests on Saturday, President Roch Kabore pledged in a televised address late on Thursday to address “unacceptable dysfunction” in the army.

Schools have been shut across the country in anticipation of possible unrest. Mobile internet has also been cut since last Saturday under a legal provision related to national defence and public security.