New coronavirus infections jumped 23 percent in the Americas last week, the Pan American Health Organization (PAHO) said, warning that the region could potentially be on track to follow trends in Europe, where several countries are issuing lockdown amid surging cases.

PAHO Director Carissa Etienne said there were 880,583 new COVID-19 infections in the Americas during the past week and more than 15,000 deaths.

The majority of new cases, Etienne said were driven by rising infections in the United States and Canada. While Central America, she said saw a 37 percent reduction in new infections.

Throughout this pandemic, Europe has been a window 🪟 into the future for the Americas.

“These trends are telling,” Etienne said during a weekly news briefing. “Even though COVID cases have dropped significantly over the last few months, COVID transmission is still active across our region, so every time we lower our guard, the virus gains momentum,” she said.

The update came as Europe – widely viewed as being a precursor to global trends in the pandemic – is imposing new lockdowns as several countries are recording sky-high rates of new infections.

“Throughout this pandemic, Europe has been a window into the future for the Americas,” Etienne said. “Time and again, we’ve seen how the infection dynamics in Europe are mirrored here, several weeks later.”

The stakes are particularly high for the US, a country that has already recorded more than 770,000 deaths due to COVID – more than any other country in the world. Brazil comes second with more than 600,000 deaths according to a tally kept by Johns Hopkins University.

As the US enters the colder winter months and the holiday season, where many Americans are expected to travel and hold large family gatherings, officials are increasingly worried that the country will once again begin to see a rapid spread of new infections, overwhelming hospitals.

Local media reported that air travel is expected to approach pre-pandemic levels before the Thanksgiving holiday on Thursday.

According to official data, coronavirus cases are up 16 percent in the US compared with last week, and hospitalisations have increased by 5 percent. Meanwhile, deaths have decreased by 2.4 percent.

Etienne said every country in South America except Brazil, Suriname and Venezuela is reporting increasing cases, with Ecuador and Paraguay seeing the highest jumps.

Meanwhile in the Caribbean, the island of Trinidad and Tobago is experiencing its highest-ever COVID-19 rates and hospitals were reporting being near full capacity.

Etienne said the rising cases in Europe as well as in the Americas are largely due to the relaxation of public health measures, the Delta variant, as well as “significant pockets of unvaccinated people”.

Vaccine resistance fueled by misinformation, as well as limited access to doses in the poorer countries in the region, have hampered vaccination efforts in the region.

Across Latin America and the Caribbean, 51 percent of people have been fully vaccinated, she said, adding that 19 countries have not reached the 40 percent mark.

PAHO has set the goal to vaccinate 70 percent of the population of every country in the Americas by the middle of 2022. 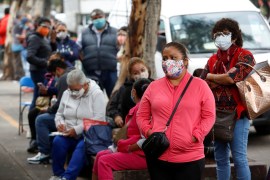 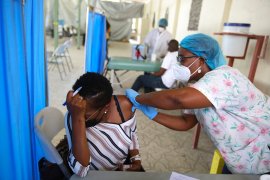 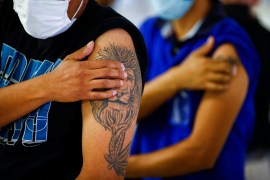 The Pan American Health Organization says less than half of people in the Americas are fully vaccinated against virus.