Dozens of countries have joined a United States and European Union pledge to cut emissions of methane by at least 30 percent this decade, in one of the most significant climate commitments so far at COP26.

The initiative, which experts say could have a powerful short-term effect on global warming, followed an announcement earlier on Tuesday in which more than 100 nations agreed to end deforestation by 2030.

“One of the most important things we can do between now and 2030, to keep 1.5C in reach, is reduce our methane emissions as soon as possible,” said US President Joe Biden, referring to the central goal of the 2015 Paris Agreement.

He called the pledge, which has so far been signed by more than 80 nations, a “game-changing commitment” that covered countries responsible for about half of global methane emissions.

European Commission head Ursula von der Leyen said that more than 80 countries had signed on to the methane cut, which would “immediately slow down climate change”.

She said about 30 percent of global warming since the Industrial Revolution is due to methane.

“Today global methane emissions grow faster than at any time in the past,” she said adding that reducing methane is one of the most effective ways to reduce near-term warming and keep the Paris goal of 1.5 degrees Celsius of warming alive.

“It is the lowest hanging fruit,” she said.

Biden, who spelled out the US commitments to reduce its own methane emissions, said “approaching 100 nations” were signing on to the global methane pledge. However, US climate envoy John Kerry had earlier put the figure at more than 100 nations.

Al Jazeera’s environment editor Nick Clark, reporting from Glasgow, said lowering methane levels was “critical” in the fight against climate change and the level of methane emissions “needs to be cut back radically”.

“It is 84 times as powerful as a greenhouse gas than CO2 and its heat-trapping abilities are much greater in the blanket of greenhouse gases that surround us,” Clark said.

“So any way that we can cut back on methane is a good thing,” he added.

The United Nations last month said that global methane emissions could be slashed by 20 percent at little or no cost using existing practices or technologies.

A report from earlier this year showed that “available targeted methane measures” could see CH4 levels reduced by 45 percent by 2030.

This would shave 0.3C off projected warming, save a quarter of a million air pollution deaths and increase global crop yields by 26 million tonnes, the UN’s Environment Programme said.

Heads of state and government are gathered in Glasgow for a two-day high-level summit that host Britain is hoping will kick start ambitious climate action during the two-week COP26.

Organisers say the ensuing shuttle diplomacy and painstaking negotiations will be crucial for the continued viability of the 2015 Paris Agreement, and its goal to limit temperature rises to between 1.5 and 2 degrees Celsius.

Earlier on Tuesday, countries also made a multibillion-dollar pledge to end deforestation by 2030.

But the promise was met with scepticism from environmental groups, and although details were sparse, it appeared to largely resemble a similar pledge made by more than 200 countries and organisations in 2014.

The British government said that the plan to drum up around $20bn in public and private funding had been endorsed by at least 100 leaders representing more than 85 percent of Earth’s forests, including the Amazon rainforest. 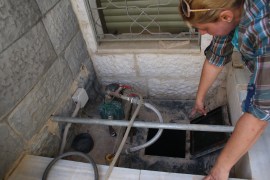 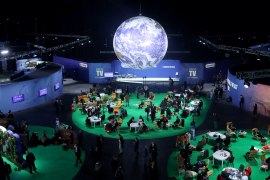 From Honduras to India, developing nations urged developed ones to live up to their financial commitments. 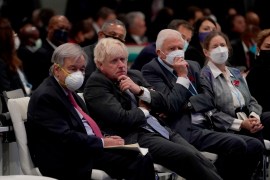 UN chief tells COP26 to ‘save humanity’ and do more to protect vulnerable groups from effects of climate crisis. 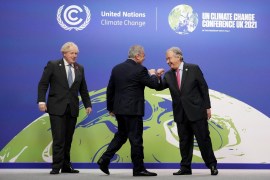