The United States has removed Nigeria from a list of “countries of particular concern” regarding religious freedom, a day before US Secretary of State Antony Blinken arrives there as part of an African tour, while issuing designations for 10 other countries.

Blinken announced the designations as part of the US State Department’s annual review of religious freedom rights violations in countries worldwide, which is based on assessments made by the independent US Commission on International Religious Freedom (USCIRF).

“Each year the Secretary of State has the responsibility to identify governments and non-state actors, who, because of their religious freedom violations, merit designation under the International Religious Freedom Act,” Blinken said in a statement on Wednesday.

“I am designating Burma [Myanmar], the People’s Republic of China, Eritrea, Iran, the DPRK [North Korea], Pakistan, Russia, Saudi Arabia, Tajikistan, and Turkmenistan as Countries of Particular Concern [CPC] for having engaged in or tolerated ‘systematic, ongoing, and egregious violations of religious freedom’.”

The designations do not necessarily come with specific or binding sanctions or other US actions, although US law states that the government must “take targeted responses to violations of religious freedom”.

Several countries that were recommended for the special watch list, including Afghanistan, Turkey, Egypt, and Iraq were also not included in Blinken’s final designation.

The US Secretary of State is expected to arrive in Abuja, the Nigerian capital, on Thursday, where he will meet President Muhammadu Buhari, Vice President Yemi Osinbajo, and Foreign Minister Geoffrey Onyeama and deliver a speech on US policy in Africa, a US State Department statement said.

In a statement, the USCIRF said it was “appalled” at Blinken’s decision not to redesignate Nigeria a CPC, despite it having been designated as such in 2020.

“While the State Department took steps forward on some designations, USCIRF is especially displeased with the removal of Nigeria from its CPC designation, where it was rightfully placed last year, as well as the omission of India, Syria, and Vietnam,” said USCIRF chairperson Nadine Maenza.

“We urge the State Department to reconsider its designations based on facts presented in its own reporting.” 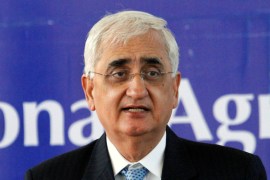 Salman Khurshid published a book last month in which he compared Hindu nationalists to ‘extremist groups’ such as ISIL. 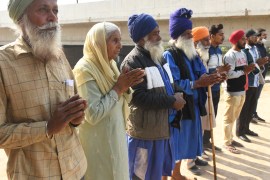 Pilgrims arrive in Pakistan to visit one of Sikhism’s holiest shrines on the birth anniversary of religion’s founder. 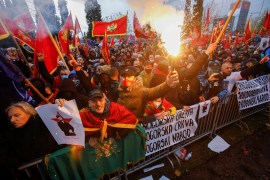 Government accused of being pro-Serb over its plans to amend religious property law opposed by Serbian Orthodox Church.