A longstanding dispute over territorial claims to islets in the Sea of Japan has derailed a scheduled joint conference between US, South Korean and Japanese officials in Washington, DC.

A trilateral meeting between the three countries in the US capital was meant to end on Wednesday with a joint news conference with US Deputy Secretary of State Wendy Sherman, South Korean Vice Foreign Minister Choi Jong-kun, and their Japanese counterpart Takeo Mori.

However, Sherman instead faced the press alone, telling reporters: “As has been the case for some time, there are some bilateral differences between Japan and the Republic of Korea that are continuing to be resolved.”

“And one of those differences, which is unrelated to today’s meeting, has led to the change in format for today’s press availability,” she said.

Japan and South Korea later acknowledged the absence was the result of an ongoing dispute over the islets. Seoul currently controls the cluster of islands, which it calls Dokdo. Tokyo, meanwhile, says the islets, which it calls Takeshima, are Japanese territory.

The most recent flare-up comes after a recent visit to the islets by South Korea’s national police chief.

A Japanese embassy spokesman in Washington, DC said the islets are “indisputably an inherent part of the territory of Japan” and that Tokyo had lodged a protest with Seoul over the visit.

“Under these circumstances, we have decided that it is inappropriate to hold a joint press conference,” the spokesman said.

South Korea’s vice foreign minister later confirmed that his Japanese counterpart did not attend the news conference over “the issue surrounding our police chief’s visit to Dokdo”.

Still, Sherman hailed the trilateral meeting on Wednesday as “very constructive”, saying it demonstrated “exactly why the trilateral format with the United States, Japan and the Republic of Korea is so important and powerful”.

She said the three sides reaffirmed their “shared commitment” to the “complete denuclearisation of the Korean Peninsula”.

She added that Washington, Tokyo and Seoul oppose “activities that undermine, destabilise or threaten the rules-based international order” in the Indo-Pacific region and in the Taiwan Strait, in a clear reference to China.

Relations between Tokyo and Seoul have been strained for decades, stemming from Japan’s brutal colonial rule over the Korean Peninsula between 1910 and 1945.

The tense climate between the two countries remains a challenge for Washington, which is concerned over the implications of any flare-ups between its two close Asian allies. 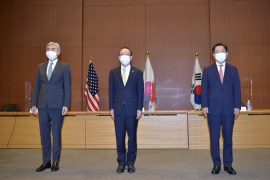 Countries want to revive talks on denuclearisation, which have been stalled for two years. The dose of huge monetary, fiscal support boosted stocks and corporate profits but didn’t trickle down to the majority.