Baghdad, Iraq – The unforgiving cold that engulfs the forest in the no-man’s land by the Belarus-Poland border sets in nightly and only dissipates after sunrise.

Thousands of asylum seekers, mostly from the Middle East, have gathered in the forests on the eastern frontier of the EU.

Some have been there for weeks, battling cold and hunger as they wait in hope of crossing the border to enter Poland.

Shvan, who is on the Belarusian side of the border, struggles to keep himself warm in nearly-zero temperatures.

He tries to sleep in a tent he bought in Minsk, the Belarusian capital. When he steps out of it, he is greeted by a scene that is becoming the new norm.

Groups of people like him emerge from tents or sleeping bags dotted along the barbed-wire fence that stretches as far as the eye can see.

“I don’t know how long I can keep doing this, because this is really humiliating,” Shvan, a Kurd from the Iraqi city of Soran, told Al Jazeera during a WhatsApp video interview, asking to only be identified by his first name out of fear of repercussions.

“We keep telling the Polish officers that we are running out of food and water, but they do not care at all.

“They look at us as if we are some crazy animals,” Shvan sighed, his breath hanging in the cold air.

As Shvan took a quick walk to collect wood for a fire, he turned his camera to a family of four.

“Look – this man has to wrap his jacket around his daughter so she doesn’t get too cold,” he said.

Shvan is one of the thousands of refugees and migrants who left their home countries and embarked on this perilous journey to Europe.

They are stuck in the border area, which has been largely shut off to the media. As winter sets in, human rights groups have warned of a looming humanitarian crisis.

Many are from the Kurdish region of Iraq – a northern territory that is effectively autonomous.

Despite its relative safety compared with federal Iraq, the Kurdish region has its own scars: corruption that has driven many to unemployment, nepotism that has shut many Kurds out of decent jobs and, as put by people who spoke with Al Jazeera, “the impossibility of having a good life”.

But those who have already embarked on this journey paid thousands of dollars to travel agencies for a full package that included flights out of Iraq and to Belarus, hotel fees, and visa fees.

Dilsoz, a 27-year-old woman from Erbil, the Kurdish capital, left her home with her husband in early October due to a lack of employment opportunities.

During a text exchange with Al Jazeera, Dilsoz said they paid about $7,000 to a travel agency in Erbil for a package that included a flight from Erbil to Istanbul, a night in an Istanbul hotel and a ticket from Turkey to Belarus.

“It was easy when we left because the travel agency took care of everything,” Dilsoz said. “I had to ask my family and [my husband’s] family to financially support us to afford the package, but I thought it was worth it because I’d rather risk this journey to Europe than stay at home and lose hope for life.”

“I remember the joy of getting the confirmation text from my travel agent – I thought my new life was about to begin,” he said.

As they reached the Belarus-Poland border, that dream shattered.

Reports suggest Belarus lured asylum seekers like Shvan and Dilsoz into the country so they could be escorted to the border area. The Belarusian police have been accused of giving the refugees and migrants wire cutters to help them cross the border to Poland.

Many in the West claim that Belarusian leader Alexander Lukashenko, in retaliation for sanctions imposed by the EU over a disputed election in 2020, has been using refugees and migrants to punish the European Union and try to destabilise the continent.

As the crisis continues, some transit countries – such as Turkey – and their flagship airlines have banned certain nation’s citizens from boarding flights to Belarus, including Syrians, Iraqis, and Yemenis, in a bid to reduce the crisis.

Travel agencies contacted by Al Jazeera said they had since rerouted their flights so passengers could transit in cities such as Dubai to avoid the ban.

This eastern front of the EU migratory route is relatively new, compared with the dangerous maritime journey from Turkey to Greece or from North Africa countries to Italy and Spain.

Both sea routes have seen asylum seekers die and led to more coastal control. A relaxed visa policy put out by Belarus paved the way for an attractive alternative.

In a cabinet meeting last week, the Iraqi government said that it would allocate $300,000 to “support the Iraqis stranded by the border” and help them “voluntarily return”.

Iraq has since announced it will offer repatriation flights to anyone who wants to return, from Thursday.

“No way I’m going back to Iraq,” Shvan said. “And I don’t think anyone else here would want to go back to a life without any hope.” 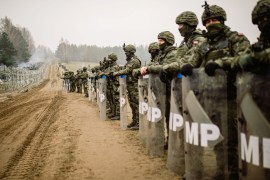 Stranded refugees and migrants say they are in dire need of help as row between European Union and Belarus escalates. 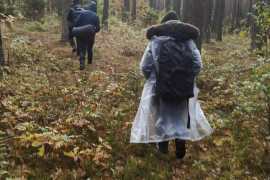 ‘Please save us’: Refugees face death at Poland-Belarus border

People are dying of cold and hunger at the doors of Europe, Nidal Ibrahim tells Al Jazeera from the Belarusian border. 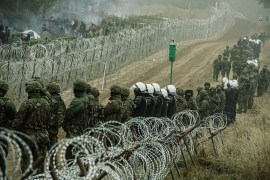 Poland denies journalists access to border with Belarus as thousands of people remain stranded amid a geopolitical row. 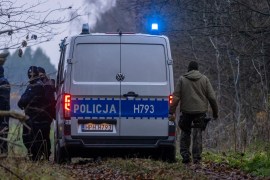