Rohingya refugees living in sprawling camps near Cox’s Bazar in Bangladesh say they are caught in the middle of alleged police “atrocities” and violence by an armed group with members within the community.

Bangladesh security forces launched a crackdown following the killing of Mohibullah, a prominent Rohingya activist, who was shot dead at close range by gunmen at his office in the Kutupalong refugee camp at the end of September.

Following Mohibullah’s murder, Bangladesh’s Foreign Minister AK Abdul Momen pledged to take “stern action” against the assailants, saying “no one will be spared”. More than 170 Rohingya have been arrested so far as part of the crackdown.

The refugees say Mohibullah’s murder has become a pretext for the Bangladeshi forces to treat them aggressively, with allegations of blackmail, extortion, violence, and even sexual assault being made.

Al Jazeera spoke with some of the refugees about the allegations.

In another case, he claimed to have witnessed a distressed woman shouting at a checkpoint.

“When I asked her the reason, she said the police used security reasons to touch her private parts,” he said.

He said the ramped-up security measures after Mohibullah’s death have made nearly every Rohingya in the camp a suspect.

“Ninety-nine percent of the refugees are not bad but they treat us like we are all the same.”

Hussein*, another refugee Al Jazeera spoke to, listed at least eight incidents of extortion by the security forces for amounts ranging from 700 Bangladeshi taka ($8) to 2,000 taka ($23), allegedly given by refugees to get their mobile phones back.

He said he was also interrogated about new telephone numbers in his contacts list.

“They will check our WhatsApp, Facebook, email, messenger. If they find foreign contacts, they accuse us of selling information and working with terrorists. Unless we give money, they will take us to the police station. They treat us as less than animals,” he said.

He said checkpoints at the camps remind him of being in Myanmar under brutal military rule. “The police don’t have humanity or compassion. When a person needs help, all they demand is money.”

“We haven’t received this type of information from anybody, there is nothing about this in the camp area. Police are carrying out their normal duties and the investigation process,” he told Al Jazeera.

“There are some illegal activities taking place in the camp area, like abduction and narcotics, so police are only arresting those kinds of people.”

About allegations of sexual harassment of Rohingya women by the police, he said: “This is completely false. We do not have any kind of report like this in our country.”

The aftermath of Mohibullah’s murder

Mohibullah, 46, was a former science teacher who became the leader of the Arakan Rohingya Society for Peace and Human Rights, an NGO he formed to document the Myanmar military’s brutal offensive that caused 750,000 Rohingya to flee to Bangladesh in August 2017.

Locals say his non-violent attempts at securing the safe repatriation of the refugees clashed with the armed-conflict approach propagated by the Arakan Rohingya Salvation Army (ARSA), an armed group Mohibullah’s family accused of murdering him.

ARSA, formerly known as Harakatul Yakeen, first emerged in October 2016. It claims to fight for more than a million Rohingya who have been denied basic rights, including citizenship.

SOAS Professor of Global Thought Dr Arshin Adib-Moghaddam told Al Jazeera: “Mohibullah was the victim of a struggle for survival. He was targeted exactly in order to subdue civil rights leadership and move the battle away from peaceful dialogue and social consensus-seeking.”

One anonymous Rohingya man told Al Jazeera Mohibullah was “envied” by those who did not support him and killed “because he refused to join ARSA”.

But he said Mohibullah’s loss has now dashed hopes of freedom held by those who felt optimistic after his 2019 meeting with then-US President Donald Trump. “It’s a massive loss for the whole community. Everyone’s expectations got ruined because of ARSA assassins.”

Bangladesh authorities told Al Jazeera so far nine people had been arrested in relation to the killing. It was not confirmed whether those people were members of ARSA.

“The Rohingya community needs civil society leadership to speak for their rights. Mohibullah had previously spoken at the UN in Geneva and had travelled to the US. It is a sad loss for the refugee community to lose such an effective voice,” she told Al Jazeera.

Between a rock and a hard place

Mohibullah’s murder has also triggered a volatile and unsafe climate in camps, leading to ramped-up security measures after seven people were killed at an Islamic seminary days after the Rohingya leader was shot dead.

More violence broke out last week when Mohammad Hashim, who police suspect was a member of ARSA, was found dead after an alleged mob attack by a rival gang.

Rohingya refugees say they are facing brutal repercussions of both Mohibullah’s murder and the subsequent probe into the killing by Bangladeshi officials.

On the one hand, they fear the incident serves as a warning of what could happen to those who speak out. On the other, they say the murder provides a pretext for some in the Bangladesh forces to exploit the situation with acts of blackmail, extortion, violence, and sexual abuse.

Jabir* told Al Jazeera the police accused him of “having terrorist connections” and of using his phone to send information to ARSA because stories about the group appeared on his Facebook feed.

Jabir said he was escorted home where he was told to pay them or be added to the suspect list and face arrest.

“I was scared. We never hear what happens to people they arrest. But they took my photo and told me not to speak with anyone about this,” he told Al Jazeera.

Omran* said he witnessed security personnel using Bluetooth to send photographs of ARSA members to the phones of Rohingya being examined at checkpoints.

“They wanted to create a fake case to demand money. And if I don’t give it, I could be made a suspect in Mohibullah’s murder,” he told Al Jazeera.

The 25-year-old reporter said he is currently in hiding after his interview with Mohibullah’s brother triggered death threats from ARSA.

“When Rohingya are threatened by police arrest, they run from their shelter and look for a place to hide. If they cannot find it, they join ARSA.”

UNHCR spokeswoman Catherine Stubberfield told Al Jazeera the organisation “does not comment publicly on individual cases for reasons of confidentiality and protection” but does “urge the Bangladesh authorities to take immediate and effective measures to improve the security in the refugee camps”.

ARSA violence was also alleged in a video statement seen by Al Jazeera, featuring a woman saying her husband was killed by the gang’s members.

“My daughter and I tried to stop them but they beat me mercilessly then took him away,” she says in the video.

A Rohingya man claimed the undercover nature of ARSA members makes it “very difficult” to estimate the size of the group. He claimed it is “very big” and has “financial supporters in Pakistan, Saudi Arabia, Malaysia and Australia”.

But he said people in the camp are afraid to speak out about incidents relating to them because “the person you are sitting next to could be a member of ARSA”.

“We cannot trust anyone; we cannot rise against them because we don’t know who in the camp is with them. They could come at night by covering their faces and take us out of the shelter and kill us. So we stay silent,” he said.

But he agreed with journalist Arakani that the police threatening innocent Rohingya with arrest has contributed to ARSA’s rise in the camps.

* Names of some people have been changed to protect their identities 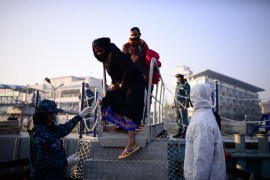 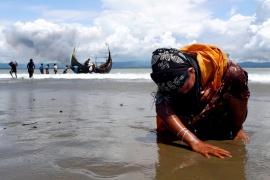 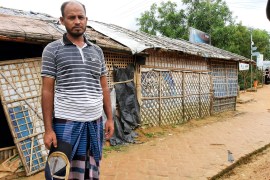 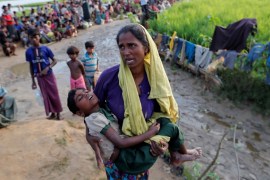