Amid a deepening political crisis and a severe fuel shortage that has impacted hospitals, schools and businesses in Haiti, the United States is urging American citizens to leave the Caribbean nation.

The US State Department warned that “widespread fuel shortages may limit essential services in an emergency, including access to banks, money transfers, urgent medical care, internet and telecommunications, and public and private transportation options”.

US citizens “should carefully consider the risks of traveling to or remaining in Haiti in light of the current security situation and infrastructure challenges”, it said in a statement on Wednesday.

“The US Embassy is unlikely to be able to assist US citizens in Haiti with departure if commercial options become unavailable.”

It is unclear how many US citizens currently live in Haiti, but the rare warning from the State Department comes as the Haitian government and police are struggling to control gangs that have blocked fuel distribution terminals for several weeks.

Top government officials acknowledged the widespread lack of fuel, saying during a news conference on Tuesday that they were working to resolve the situation, although they provided no details.

The State Department warning also comes as a group of 17 Christian missionaries who were kidnapped last month, including 16 US citizens, still remain captive.

Haitian police inspector Frantz Champagne in October said a gang known as 400 Mawozo was behind the kidnapping, while a top Haitian official told The Associated Press the gang is demanding $1m per person in ransom.

“The kidnapping took place on October 16 and we are still waiting and praying for the group of 17 to be released, if God so wills,” Christian Aid Ministries, the US-based group that organised the trip, wrote on its website on Wednesday.

“As you pray, remember the millions of Haitians who are suffering through a time of serious upheaval and unrest.”

Haiti: We urge U.S. citizens to make plans to depart Haiti now via commercial means. U.S. citizens should carefully consider the risks of traveling to or remaining in Haiti in light of the current security situation and infrastructure challenges. https://t.co/CtK1GBgTQN pic.twitter.com/3miCuLLf8m

But details about ongoing attempts to locate and rescue the group of missionaries have been sparse. US President Joe Biden is being briefed daily on the law enforcement effort, officials have said.

The incident has focused global attention on gang violence in Haiti, which has worsened amid economic and political crises following the assassination of Haitian President Jovenel Moise in early July.

Moise was assassinated in his home in the capital, Port-au-Prince, on July 7. A new prime minister, Ariel Henry, was sworn in less than two weeks later amid uncertainty over who would take up the critical post.

But Henry – who is backed by the US and other international actors – has struggled with legitimacy. In September, he dissolved the electoral council and postponed elections planned for this month. A new date has yet to be set.

Meanwhile, Defence Minister Enold Joseph said the government is investigating why 30 fuel tanks sent to Haiti’s southern region went missing, adding that he has observed petrol being sold on the black market.

Southwestern Haiti is still reeling from a devastating, 7.2-magnitude earthquake that struck in August, killing more than 2,200 people, injuring thousands more, and destroying or damaging buildings and key infrastructure.

The fuel shortage also has threatened Haiti’s water supply, which depends on generators.

On Wednesday, Doctors Without Borders (Medecins Sans Frontieres, or MSF) warned that the shortages have forced it to reduce medical care since last week, with staff treating only patients with life-threatening conditions.

The aid group said its hospital and emergency centre would run out of fuel for generators in three weeks or less if new supplies do not arrive.

“As tensions and armed conflict escalate in Haiti’s capital, shortages of fuel, public transportation and drinking water are putting medical facilities and patients at risk,” MSF said. “Nearly all public and private health facilities in Port-au-Prince have stopped or limited admissions to only acute cases or closed their doors due to similar problems.”

The situation also has led to a spike in food prices in a country of more than 11 million people where more than 60 percent of the population makes less than $2 a day. 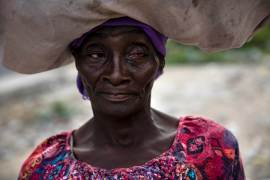 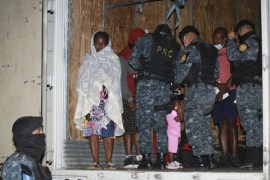 Migrants were ‘transported to the border’ with Honduras, from where they had entered Guatemala illegally. 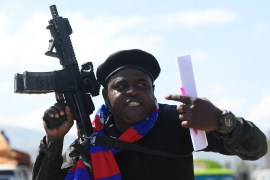 Haiti gang leader calls on US, UN to break ties with gov’t