Closing arguments will be heard next week in the US murder trial of Kyle Rittenhouse, the 18 year old who shot three demonstrators last year during a wave of racial justice protests in the city of Kenosha, Wisconsin.

Rittenhouse’s defence team on Thursday closed out its case with a video journalist who testified that one of the men the teenager fatally shot had posed a threat.

The case has highlighted deep divisions in the United States, which saw mass Black Lives Matter protests across the country last year demanding an end to police violence and racism.

Rittenhouse took the stand in his own defence in explosive testimony earlier this week, insisting that he acted in self-defence and that he was threatened, chased and ambushed by the people he shot on August 25, 2020.

Rittenhouse fatally shot two demonstrators and injured a third amid a wave of Black Lives Matter protests in Kenosha that followed the police shooting of Jacob Blake, a Black man.

“I didn’t intend to kill them. I intended to stop the people who were attacking me,” he told the court on Wednesday.

The teenager’s lawyers have sought to portray him as a patriot who acted in self-defence, while prosecutors say Rittenhouse – who was carrying an AR-15 rifle on the night of the events – instigated the violence.

Rittenhouse is facing homicide charges that carry a possible life sentence, for fatally shooting Joseph Rosenbaum, 36, and Anthony Huber, 26. He also shot and wounded Gaige Grosskreutz, now 27, in the arm.

His defence team put witnesses on the stand over two-and-a-half days, while prosecutors presented testimony over a span of about five.

Kenosha County Assistant District Attorney James Kraus said on Thursday he planned to ask the judge to allow the jury to consider lesser charges on the counts involving the shootings of Huber and Grosskreutz, a move that would lower the burden of proof for conviction.

“I’m not surprised the state requested lesser included instructions,” Michael Hart, a criminal defense lawyer in Milwaukee, told the Reuters news agency. “They recognise that their case had some shortcomings and they are trying to salvage as many convictions as they can.”

On Thursday, the defence called to the witness stand Drew Hernandez, who testified that he saw Rittenhouse earlier in the night de-escalating a situation.

Hernandez, who now works for conservative media outlet Real America’s Voice, said he saw the first man who was shot that night, Rosenbaum, “charging” at Rittenhouse and then lunging at the teenager.

A use-of-force expert also testified for the defence that less than three seconds elapsed between the time a protester in the streets fired a shot in the air and the time Rittenhouse opened fire with his rifle.

The defence has suggested to the jury that the relevant timeframe for determining whether Rittenhouse’s use of force was reasonable consists of just a few minutes around the shootings.

John Black said it took 2 minutes, 55 seconds, from the time Rosenbaum chased Rittenhouse across a car lot to when Rittenhouse approached police after the shootings.

Prosecutors, for their part, have stressed a much longer window, saying the chain of events occurred over hours, starting with Rittenhouse’s decision to go to a volatile protest with a rifle.

After closing arguments on Monday, names will be drawn to decide which 12 members of the jury panel will deliberate and which ones will be dismissed as alternates. Eighteen people have been hearing the case. 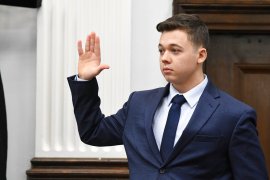 Kyle Rittenhouse says he ‘didn’t do anything wrong’ and only used rifle to stop people who were attacking him. 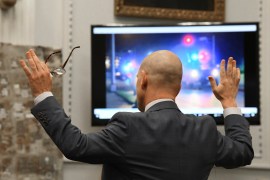 Survivor tells US court he saw Rittenhouse as ‘active shooter’

Gaige Grosskreutz says he had raised his hands before being shot and never intended to use a gun he was holding. 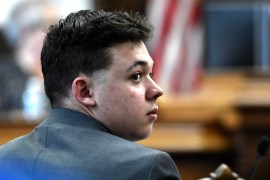 Charged with killing two during violent protests in Wisconsin last year, Rittenhouse has pleaded not guilty. 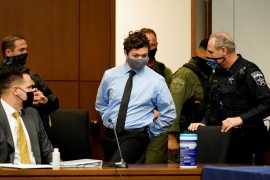 ‘Politics are going to run deep through this thing,’ law professor says of the trial of Kyle Rittenhouse for murders.