Journalists Maria Ressa, of the Philippines, has won this year’s Nobel Peace Prize along with Dmitry Muratov, of Russia, “for their efforts to safeguard freedom of expression”.

Ressa, 58, is a co-founder of investigative journalism website Rappler and has focused much of her work on Philippine President Rodrigo Duterte’s controversial and violent war on drugs.

Through her work, she has documented “how social media is being used to spread fake news, harass opponents and manipulate public discourse”, the Nobel committee noted.

Rappler, which was launched in 2012 and now has more than 4.5 million followers on Facebook, has become known for its hard-hitting investigations and is one of the few Philippine media organisations to be openly critical of Duterte and his policies.

Ressa has faced numerous legal cases, which she says are politically motivated, including a conviction for libel last year in a case widely seen as a test of Philippine press freedom.

In an interview with Al Jazeera, she discussed the nexus between journalism and peace-making in the age of social media.

Al Jazeera: When the Nobel Prize Committee phones you up and says “you’ve won”, what goes through your head at that point?

Ressa: I was shocked. You could hear the shock in my voice. I was also live at that point for a panel on A Thousand Cuts, which is a documentary that was done about Rappler and what we had to go through in the past few years … I went from stunned to shocked to when I was asked a reaction in that same panel it hit me and I cried.

Now I’m very humbled and honoured and thankful that journalists have the attention. The committee made a point to show that journalists are under attack. Perhaps our future is going to be dependent on how well we do our jobs.

Al Jazeera: What do you think it says about your journalism and how your journalism is received in this “global ecosystem”, to use a phrase you used, where it is taken, absorbed, tainted, misinterpreted and twisted and then used against you?

Ressa: Our experience in the Philippines is the experience I think of everyone around the world. When news organisations lost their gatekeeping powers to technology platforms, those platforms abdicated responsibility for the public sphere. That has made facts debatable. Because facts and lies are treated equally.

This is what the choice of the committee has shown, that we must maintain the facts and that the people who are in charge of maintaining the facts are facing far greater dangers than we have before.

Al Jazeera: How do journalists fix that? Honest journalists have to reach people who live in echo chambers on Facebook and Twitter. How do you get to them and how do you change this?

Ressa: We work a lot on three fronts. The first is to do these stories that show exactly how this manipulation happens, how social media has become a behaviour modification system.

The second is to strengthen independent journalism and continue to demand legislation for the tech. I recently accepted a co-chair for the International Fund for Public Interest Media along with the former CEO of The New York Times to try to help independent media to survive.

The third pillar is community. You talked about trust, well you can’t talk of trust if the platform is tainted if a virus of lies enters the information ecosystem. So the way you do that is you begin to create communities that build resilience and we’re going to do that by making sure that it is fact-based, evidence-based reasoning that can help take apart the problems we face.

Al Jazeera: When you chose to publish a story, do you perceive yourself as a peacemaker or are you a journalist who’s laying out the facts?

Ressa: They are kind of identical in the sense that it goes back to the facts. How do you make peace? You are going to have to get both sides to actually agree that this is what it is – this is a can of soda. You are going to have people understand that and agree to that. If you can do that then you can begin to heal divisions that are there. As it stands right now, the divisions are what is being pounded by information operations that help power consolidate power.

Al Jazeera: Does it come down to the fact that sooner or later people have to gather around the negotiating table?

Ressa: Absolutely, and that’s meaningful human endeavour. We have to treat this time like 1945, after Hiroshima, after an atomic bomb exploded, when we needed to stop humanity from doing the worst to humanity.

And what came out of that? They came together and created the United Nations, they created the Universal Declaration of Human Rights and somehow by coming together, by agreeing that these are our principles, we were able to create this period of relative peace.

That’s our role. Our role is to make sure we have the facts and that everyone sitting at the table can talk to solve these problems. 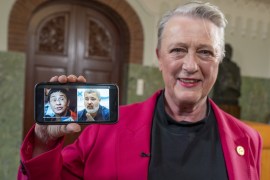 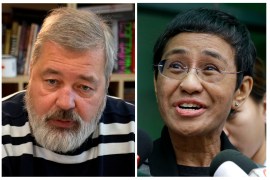 Journalists from the Philippines and Russia hailed ‘for their efforts to safeguard freedom of expression’. 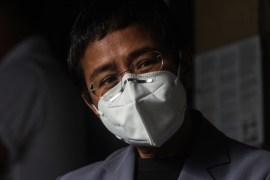 Maria Ressa case: The end of democracy in the Philippines?

The conviction of Rappler editor highlights the pressure on media from President Rodrigo Duterte’s government.