China has again said that Taiwan has “no right” to join the United Nations, a day after the United States voiced support for the island’s “meaningful participation” at the organisation.

The back-and-forth comes days after Taiwanese officials spoke with US officials about Taiwan’s desire to have a role at the UN.

Taiwan had held the Chinese seat at the organisation until October 25, 1971, when it was voted out as representative of the country in favour of the People’s Republic of China, which won the civil war in 1949 and forced the republican government to flee to the island.

Since then, Taipei has regularly sought increased participation at the UN and its array of bodies.

On Wednesday, in response to US support for Taipei’s endeavour, the spokesman for the Taiwan Affairs Office in Beijing Ma Xiaoguang said Taiwan “has no right to join the United Nations”.

“The United Nations is an international governmental organisation composed of sovereign states … Taiwan is a part of China,” Xiaoguang told reporters.

That came after US Secretary of State Antony Blinken, in a statement on Tuesday, said he regretted that Taiwan had been increasingly excluded on the world stage.

“Taiwan’s meaningful participation in the UN system is not a political issue, but a pragmatic one,” Blinken said.

“That is why we encourage all UN member states to join us in supporting Taiwan’s robust, meaningful participation throughout the UN system and in the international community.”

While the US has long called for Taiwan’s inclusion in UN activities, the latest exchange comes amid an escalation of diplomatic rhetoric and military posturing over the island, which some observers fear could bring the superpowers to the brink of confrontation.

The US, like many countries, switched recognition to the People’s Republic of China in Beijing in 1979 but maintains a policy of “strategic ambiguity” with the island under the Taiwan Relations Act of 1979.

The legislation mandates the US “preserve and promote extensive, close and friendly commercial, cultural, and other relations between the people of the United States and the people of Taiwan”.

In recent months, Beijing has regularly set records for the number of fighter jets it has flown near Taiwan, which it has called a warning to the government in Taipei.

Beijing also recently held beach-landing exercises on its side of the roughly 160km-wide (100-mile-wide) Taiwan Strait.

Meanwhile, US President Joe Biden last week made waves when he told a televised forum that the US was ready to defend Taiwan from any Chinese invasion. The statement appeared to break from the longstanding US policy of not making clear how Washington would respond to such an event.

Blinken on Tuesday reiterated that the US still recognises only Beijing.

“Grateful for #US support for expanding #Taiwan’s international participation,” she said on Twitter.

“We stand ready to work with all like-minded partners to contribute our expertise in international organizations, mechanisms & events.” 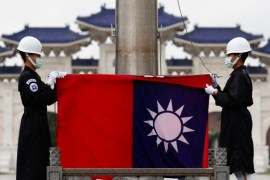 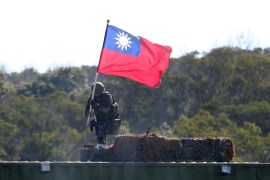 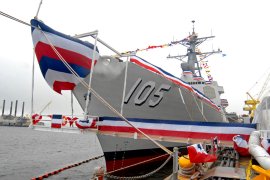 Beijing’s angry reaction comes after a US destroyer and Canadian frigate sailed through the narrow waterway.