Authorities in Eswatini have banned protests following the latest wave of pro-democracy demonstrations in the kingdom, as regional envoys from other Southern African countries arrived in the kingdom in an attempt to ease rising tensions.

“Due to the spate of violent cases during protests, I have stopped all city and town municipals from issuing permits to hold protests,” Public Works Minister Prince Simelane told a news conference on Thursday.

It came as unions said a protester had died in hospital from gunshot wounds suffered on Wednesday when security forces opened fire on a protest.

Fifty members of the civil servants’ union NAPSAWU were also taken to hospital in the capital, Mbabane, according to the group’s president, Oscar Nkambule, while 30 others were admitted to hospital in the city of Manzini, including some with gunshot wounds.

The Communist Party of Swaziland said the situation at the largest government hospital in Mbabane resembled a “war zone”.

Hospital floors were “drenched in blood”, the party said in a statement on Wednesday, adding that police “invaded the hospital, shooting even nurses as they attended to the injured, worsening the situation”.

The nurse’s union alleged that security forces kept shooting at nurses into the evening, even as they were travelling to work night shifts at hospitals.

“Clearly these blood-thirsty imbeciles, brood of vipers are hell-bent to kill nurses and the nation in defence of an ailing government,” the union said, calling on members not to treat any wounded soldiers or police.

“Images that are coming from Eswatini are very disturbing indeed, and we can see that the political temperature is very hot,” Jeff Radebe, head of the mediators sent to the country by the 16-nation Southern African Development Community, told South Africa’s public broadcaster.

‘Until they cut my heart’

Pro-democracy groups in Eswatini accuse King Mswati III of living a lavish life while ruling over one of the poorest countries in the world where nearly two-thirds of its 1.1 million population live in poverty and a quarter of adults have HIV.

In a report this week, human rights group Amnesty International said at least 80 people have been killed by security forces since May, while more than 1,000 have been arrested, including two members of parliament who are still in jail.

According to the government, the death toll in connection with the protests stands at 37. Officials have also accused demonstrators of causing damage and economic losses estimated at more than $68m as people have not been able to go to work and businesses were forced to shut.

Deputy Prime Minister Themba Masuku said the king is open to having a dialogue with all sectors of society once the violence ends and the coronavirus pandemic is over.

“We are ready to engage,” Masuku told Al Jazeera. “But it is important to note that any engagement must be in an environment of calm, of peace,” he added.

Protesters, however, are showing no sign of giving up. Longtime activist Madzabudzaru Kunene, who lost one of his legs to police fire during an earlier round of protests, said he would not stop demanding democratic reforms, regardless of the risk.

“I will fight even if their will cut my other leg, and if I will still have hands, they will have my hands, until they cut my heart,” Kunene told Al Jazeera.

“That is the way I will stop.” 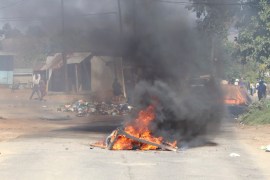 Journalist Cebelihle Mbuyisa was arrested without charge and beaten by police while reporting on protests in Eswatini. 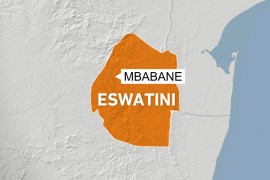 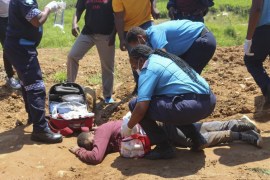 At least one person was killed and dozens wounded in latest pro-democracy protests in tiny southern African kingdom.