After spending six years in jail, Nisreen Abu Kmail was denied the permit to enter Gaza to reunite with her family as she holds an “Israeli identity blue card”.

Abu Kmail, 46, is originally from Haifa in the 1948 occupied territory and has an Israeli identification card, but has been married to a Palestinian in Gaza for 20 years.

After her release from Al Damon prison, Abu Kmail directly headed to the Erez Crossing to enter Gaza. However, she was banned from entry because she does not have the required entry permit and has been forced to stay in Hebron ever since.

Early Tuesday, Abu Kmail cheerfully told Al Jazeera on the phone that she was informed the Israelis would allow her to enter Gaza, and she was heading directly to the crossing.

On the Palestinian side of Erez Crossing, Abu Kmail’s family – including her seven children – gathered again, hoping for the third day in a row to welcome her.

But after waiting hours, Abu Kmail was told she would not be allowed to enter Gaza because “financial bail” must be paid first.

Nisreen’s husband, 50-year-old Hazem Abu Kmail, expressed his anger to Al Jazeera of his wife’s treatment but the Israeli authorities.

“At the beginning, the Israeli side said she could not enter as she holds the Israeli ID. Then we were informed she was granted the permit, but has to sign a pledge prohibiting her from leaving Gaza for two years,” he said.

“This morning my wife was informed again she was allowed to enter, but once she arrived at the crossing she discovered she has ‘to pay bail’ of about 4,000 shekels [$1,245] to allow her in.”

Hazem Abu Kmail accused the Israeli occupation of “playing with his children’s feelings” since it was the third day straight his wife was prevented from entering Gaza.

“We have suffered within these days more than what we have seen during the past six years,” he said. “My children and I are in great longing to see her.”

Amira Abu Kmail, 17, Nisreen’s oldest daughter, burst into tears upon hearing the news that her mother’s entry was again denied.

“We are in a deep shock and sadness,” she said. “My siblings and I were waiting impatiently for six years. She is only a few hours away from here and we cannot see her as the Israelis prevented her entry.”

Amira, who took care of her siblings during her mother’s absence, told Al Jazeera she was joyful at the beginning of the day, thinking about their reunion.

“I was imagining the moment when I would hug her. It is unjust to experience this for the third time,” she said.

According to her family, Abu Kmail was charged with “espionage” for taking video of the Haifa port on her last visit in 2014. An Israeli court sentenced her on October 20, 2018, to six years in prison with time served.

Her family calls the accusations against Abu Kmail “false”. 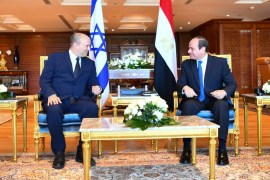 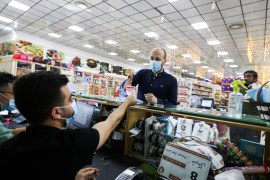 Gulf state Qatar has donated hundreds of millions of dollars to Gaza since 2014. UN says new funding amounts to $40m. 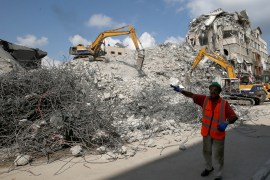 Gaza reconstruction to start by October after $1bn pledged