Iraq will hold a general election on Sunday, its fifth parliamentary vote since the United States-led invasion that toppled Saddam Hussein in 2003 and ushered in a complex multiparty system contested by groups defined largely by sect or ethnicity.

The vote had been set for next year but was brought forward to satisfy protesters who took to the streets in 2019 over rampant corruption, poor services and the widely held view that the elite had abused power to enrich itself.

Groups drawn from the Shia Muslim majority are expected to remain in the driving seat, as has been the case since Hussein’s Sunni-led regime was removed from power.

But the Shia are sharply divided, including over the influence of predominantly Shia Iran next door.

The activists who sought the removal of the entire political class have been divided over whether to contest the vote and are expected to win a few seats at most. A new election law also guarantees women at least 83 seats in the 329-seat parliament.

Here are the main groups competing in this year’s vote: 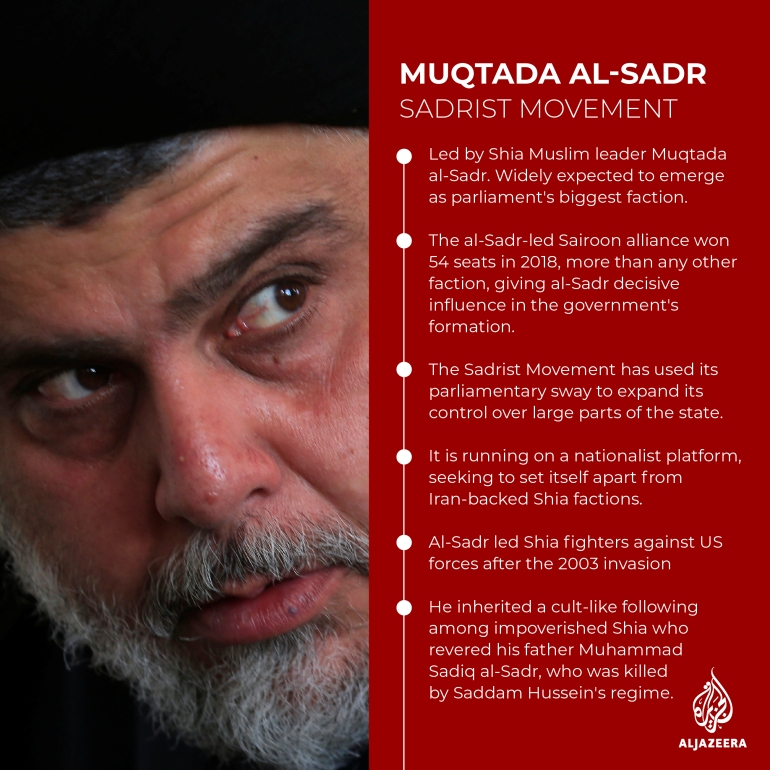 The Sadr-led Sairoon Alliance won 54 seats in 2018, more than any other faction, giving him decisive influence in the government’s formation. His movement has used its parliamentary sway to expand its control over large parts of the state.

The Sadrist Movement is running on a nationalist platform, seeking to set itself apart from Iran-backed Shia factions.

Al-Sadr led Shia fighters against US forces after the invasion and inherited a cult-like following among impoverished Shia who revered his father Mohammed Sadiq al-Sadr, a much-loved grand ayatollah whose assassination was blamed on Hussein’s regime.

Led by militia commanders who have close ties to Iran, the biggest grouping of Iran-aligned parties fall under the Fateh Alliance led by paramilitary leader Hadi al-Amiri, whose bloc came second in 2018 with 48 seats.

The Fateh Alliance includes the political wing of Asaib Ahl al-Haq, which the United States has designated a terrorist organisation and also represents the Badr Organisation, which has long ties with Tehran and fought alongside Iran in the 1980-88 Iran-Iraq war.

The Shia paramilitaries all played a major role in defeating the armed group ISIL (ISIS) when it took over a third of Iraq between 2014 and 2017. 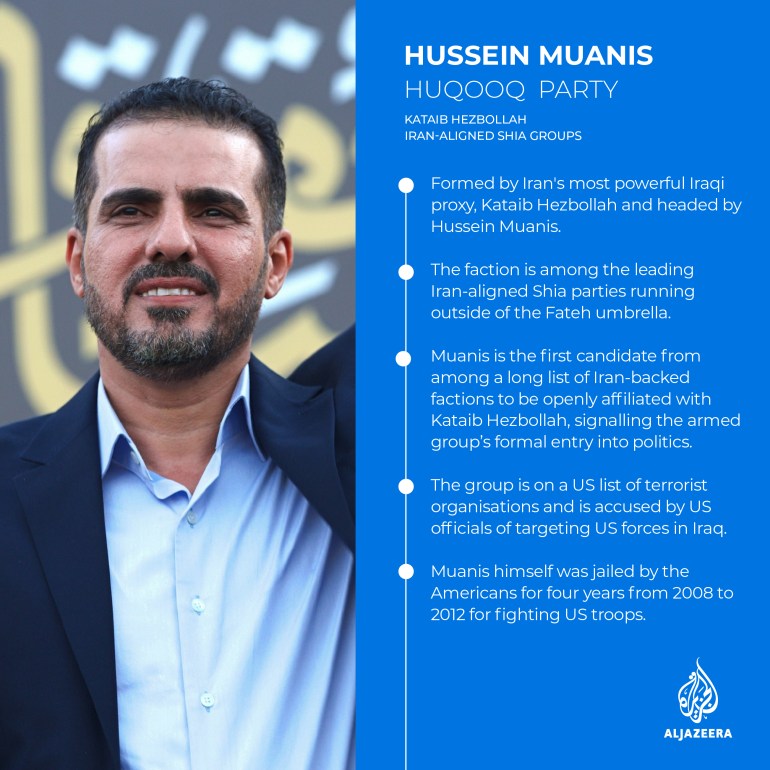 Iran’s most powerful Iraqi proxy, Kataib Hezbollah, has newly formed the Huqooq party. The factions among the leading Iran-aligned Shia parties are running outside of the Fateh umbrella. 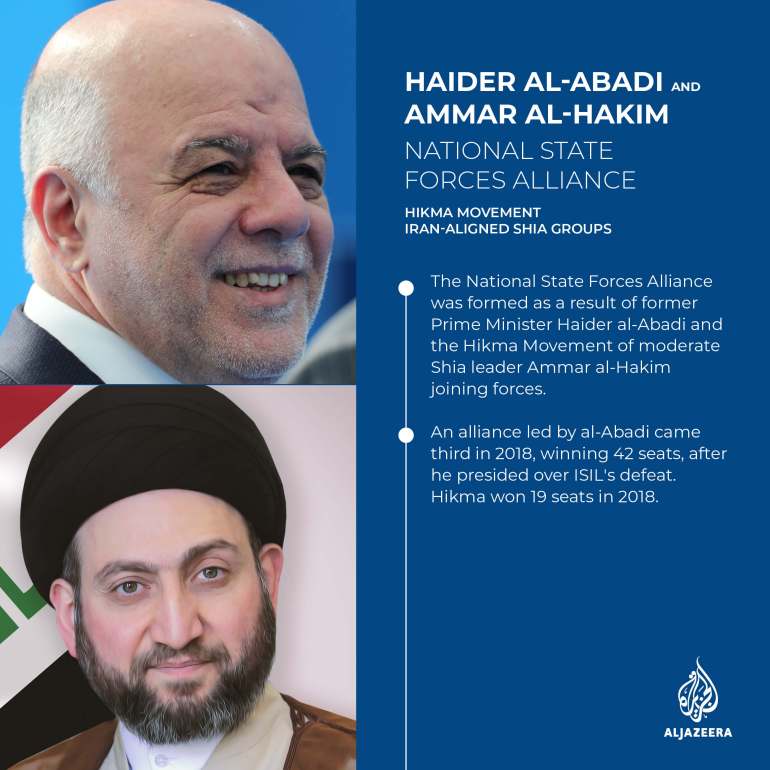 Other Shia alliances include the National State Forces Alliance, which was formed when former Prime Minister Haider al-Abadi and the Hikma Movement of moderate Shia leader Ammar al-Hakim joined forces.

An alliance led by al-Abadi came third in 2018, winning 42 seats, after he presided over ISIL’s defeat. 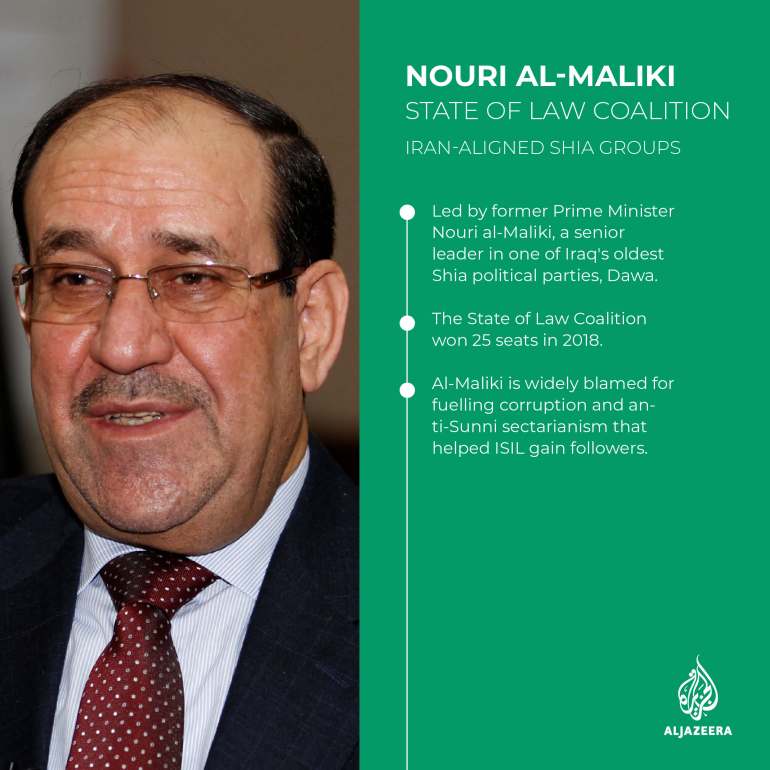 The Sunni parliament speaker, Mohammed al-Halbousi, is leading the Taqaddum (Progress) alliance which comprises several Sunni leaders from the Sunni-majority north and west of Iraq and is expected to get many Sunni votes.

Halbousi’s main competitor is Khamis al-Khanjar, a tycoon who joined the Iran-backed Fateh Alliance after the 2018 election. Khanjar’s coalition is called Azm.

The Sunni parties usually seek to appeal to tribal and clan loyalties. Sunni groups have shown little unity since 2003, which Sunni voters complain makes them weak in trying to rival Shia power.

Sunni were attacked and discouraged from participating in Iraq’s first elections after 2003 by Sunni rebels who supported Saddam and conservative fighters who opposed democracy. 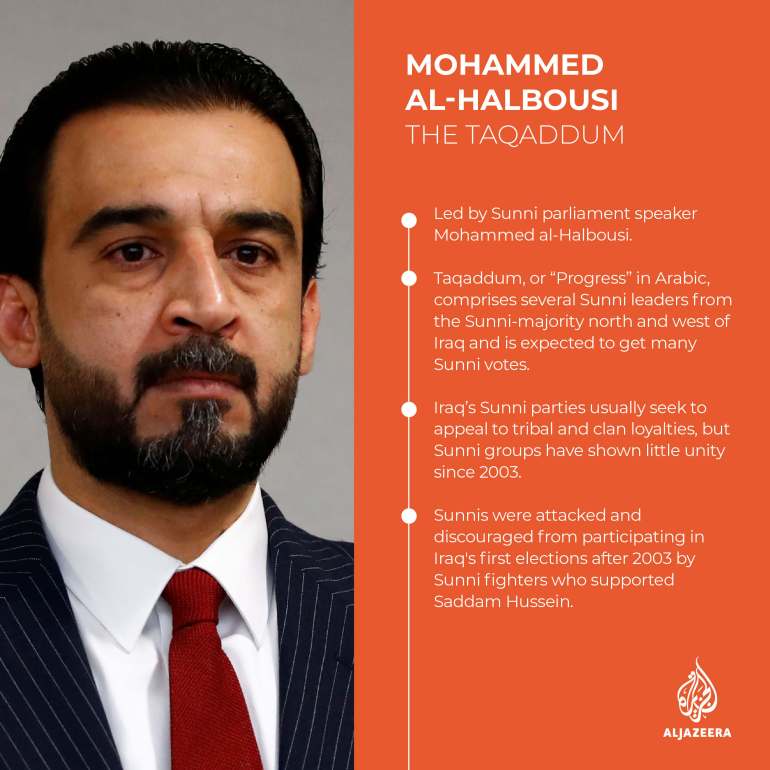 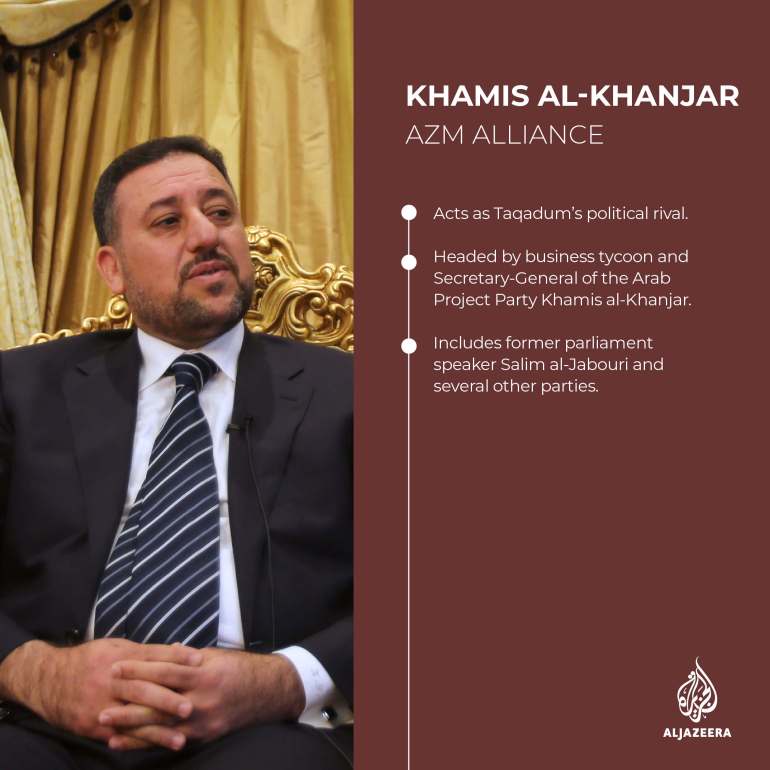 Iraq’s northern Kurdish region has had de facto autonomy since 1991 and became formally autonomous under Iraq’s 2005 constitution. Its parties always participate in elections and are an important power broker.

The two main Kurdish parties are the Kurdistan Democratic Party (KDP), which dominates the Kurdish government in the capital Erbil, and The Patriotic Union of Kurdistan (PUK) party, which dominates areas along the Iranian border and has its headquarters in Sulaimaniyah.

The KDP won 25 seats in 2018 and the PUK won 18. They will retain the lion’s share of Kurdish votes, followed by smaller parties. The total tally from seven Kurdish parties in 2018 was 58. 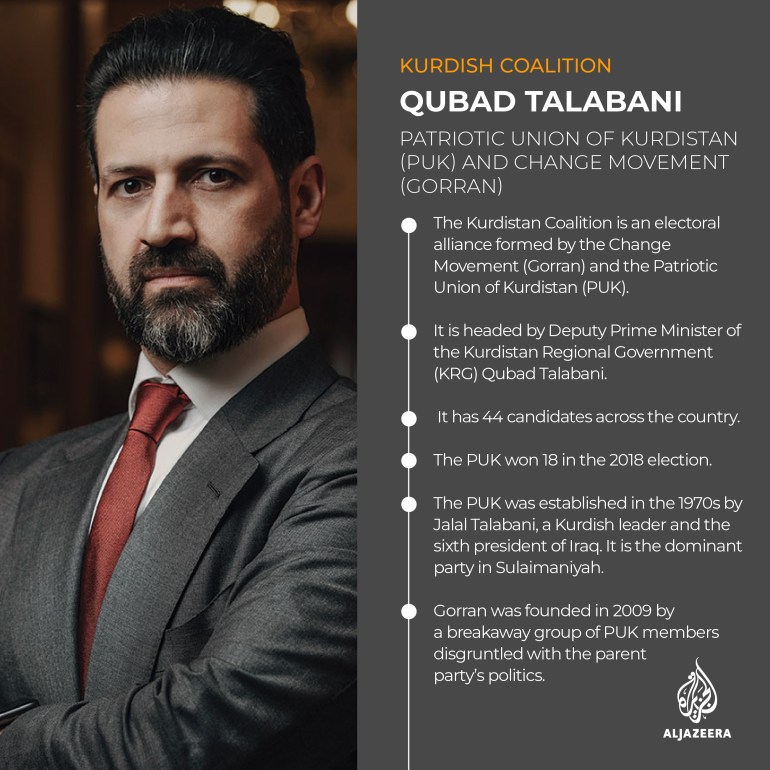 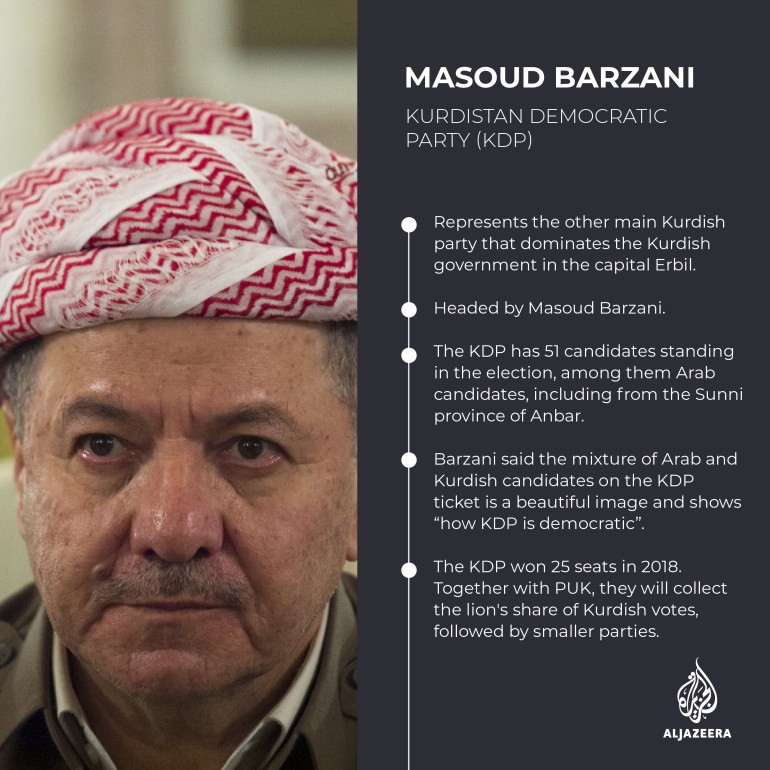 While the 2019 protests led the previous government to quit, little else has changed since then. The struggle they faced was highlighted by the use of deadly force against demonstrators which led to the death of 600 protesters and the injury of more than 20,000 others in the first six months. 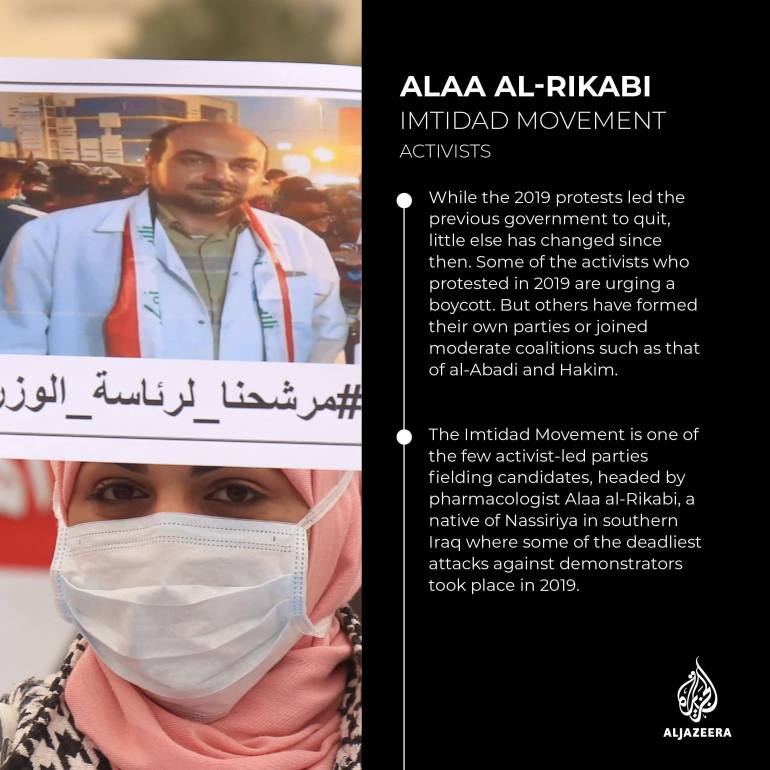 Some of the activists who protested in 2019 are urging a boycott. But others have formed their own parties or joined moderate coalitions such as that of al-Abadi and al-Hakim.

The Imtidad Movement is one of the few activist-led parties fielding candidates, headed by pharmacologist Alaa al-Rikabi, a native of Nasiriya in southern Iraq where some of the deadliest attacks against demonstrators took place in 2019.

How does the process work?

The election decides the 329 members of the Council of Representatives who will, in turn, elect the Iraqi president and the prime minister.

More than 3,240 contenders are competing against one another, with 951 female candidates who are guaranteed 25 percent, or 83, of the seats. There are 67 candidates running for nine seats to be allocated to minorities.

The main lists can be divided into Shia, Sunni and Kurdish coalitions, with Shia parties being the most prominent due to their greater influence over Iraqi politics since 2005.