The United States has hit a new record for coronavirus cases Friday, notching nearly 290,000 in a span of 24 hours, according to a real-time tally by Johns Hopkins University.

The country, the hardest-hit in the world by the COVID-19 pandemic, also recorded 3,676 virus deaths in the same day, the Baltimore-based university said.

The day before, the US had reported a record of nearly 4,000 deaths in 24 hours.

Some 131,000 people are currently hospitalised in the US for COVID-19, according to the COVID Tracking Project.

The world’s largest economy has recorded 21.8 million coronavirus cases and more than 368,000 deaths since the start of the pandemic.

The country, where health restrictions vary drastically between localities, is ultimately counting on an enormous vaccination campaign begun in mid-December to bring the health crisis to an end.

Meanwhile, a spokesman of President-elect Joe Biden said his administration may speed up distribution of COVID-19 vaccines to US states, in an effort to jump-start the slow roll-out of inoculations that have made little impact on the pandemic one week into the new year.

Such a move by Biden when he takes office on January 20 would be a departure from a Trump administration strategy to stockpile enough doses to ensure that required second doses of the vaccines are available.

It would also require that Pfizer Inc, partner BioNTech SE and Moderna Inc, makers of the first two coronavirus vaccines authorised by the government for use in the US, are able to maintain a consistent supply so second shots could be administered on schedule.

“The President-elect believes we must accelerate distribution of the vaccine while continuing to ensure the Americans who need it most get it as soon as possible,” TJ Ducklo, a spokesman for Biden’s transition, told the Reuters news agency.

As of Friday, roughly 6.6 million people across the country had received a first injection of the two-shot vaccines out of the 22 million doses shipped, according to the US Centers for Disease Control and Prevention (CDC). Some Americans got their second doses this week.

That number falls far short of the 20 million vaccinations the Trump administration pledged to administer by the end of 2020 as the pandemic spirals out of control with still-mounting infections, hospitalisations and deaths.

“The goal has to be to get vaccine out of freezers and into people’s arms, and I do think that we should get first doses in and rely on the manufacturing process to deliver the second doses in time,” said Dr Amesh Adalja, a senior scholar at The Johns Hopkins Center for Health Security.

“I would also add that the issue is less about supply but about being able to actually physically administer the vaccine, so this needs to be coupled with the ability to stage vaccination clinics, mass vaccination sites, and train vaccinators,” Adalja said.

The lag has been partly attributed to strict rules by US states controlling who should get inoculated first. Those plans have been complicated by some healthcare workers at the front of the line declining the shots, leaving the doses unused.

The CDC has said healthcare workers and nursing home residents and staff should have priority for the limited supply of vaccines. On Friday, the agency softened that guidance, recommending that states move to those next on the list: people over age 75 and so-called “essential” workers. 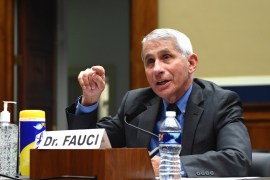 ‘We’ve been hit badly’, Fauci warns of US coronavirus surge

Dr Anthony Fauci said coming weeks ‘critical’ to address rising number of cases across half of US states. 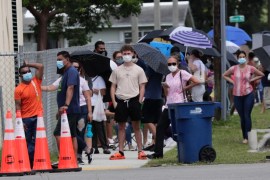 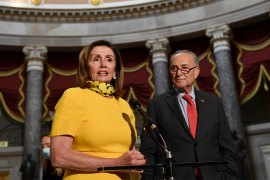 $600 a week a sticking point for US coronavirus relief bill

Democrats, Republicans differ over priorities in new round of coronavirus aid between $1 trillion and $3.3 trillion.