An Indonesian Sriwijaya Air plane is feared to have crashed into the sea after the Boeing 737 lost contact with air traffic control in the capital Jakarta with flight tracking data showing it plunged into a steep dive minutes after takeoff.

Transportation Minister Budi Karya Sumadi said flight SJ182 was delayed by an hour before it took off at 2:36pm (07:36 GMT) on Saturday.

The Boeing 737-500 disappeared from radar four minutes later, after the pilot contacted air traffic control to ascend to an altitude of 8,839 metres (29,000 feet), he said.

Sumadi told a news conference that 62 people had been on board.

A statement released by the budget airline said the plane was on an estimated 90-minute domestic flight from Jakarta to Pontianak, the capital of West Kalimantan province on Indonesia’s Borneo island, about 740km (460 miles) away.

Al Jazeera’s Jessica Washington, reporting from Jakarta, said the 62 people on board included seven children and three infants and that the authorities believe they have found debris of the plane.

“The military has sent reinforcements including helicopters, and military vessels attempting to find what exactly happened,” she said.

Washington said the flight was delayed due to poor weather conditions and heavy rain at Soekarno-Hatta International Airport.

Minister Sumadi said a dozen vessels, including four warships, were deployed in a search and rescue operation centred between Lancang and Laki islands, part of the Thousand Islands chain just north of Jakarta.

Separately, the Indonesian Navy said it determined the coordinates of the missing plane and ships were deployed to the location. 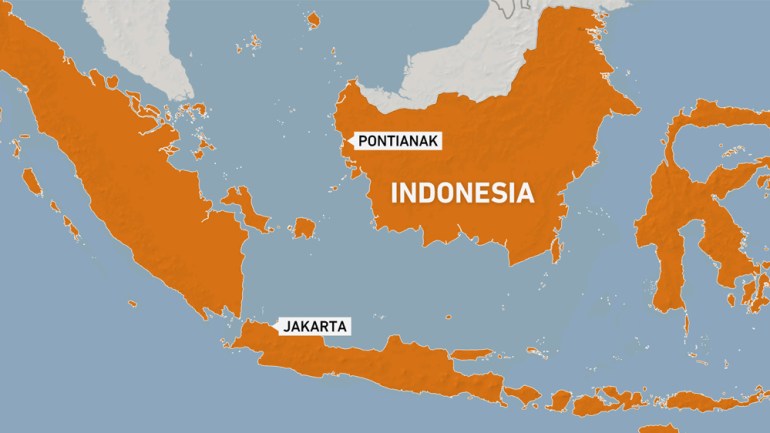 Surachman, a local government official, told Kompas TV that fishermen found what appeared to be the wreckage of an aircraft in waters north of Jakarta. Other news channels showed images of suspected wreckage.

“We found some cables, a piece of jeans, and pieces of metal on the water,” Zulkifli, a security official, told CNNIndonesia.com.

Bambang Suryo Aji, the National Search and Rescue Agency’s deputy head of operations and preparedness, said rescuers collected plane debris and clothes and they handed the items over to the National Transportation Safety Committee for further investigation to determine whether they were from the missing plane.

Aji said no radio beacon signal had been detected from the aircraft. He said his agency was investigating why the plane’s emergency locator transmitter, or ELT, was not transmitting a signal that could confirm whether it had crashed.

Reliable tracking service Flightradar24 said on its Twitter feed that flight SJ182 “lost more than 10,000 feet [3,000 metres] of altitude in less than one minute, about four minutes after departure from Jakarta”.

Television footage showed relatives and friends of the flight passengers weeping, praying and hugging each other as they waited at Jakarta and Pontianak airports.

The aircraft is a 27-year-old Boeing 737-500, according to registration details included in the tracking data.

“Many airlines in Indonesia have had issues in the past but this is a story that has caught many people off-guard as Sriwijaya Air does have some reliable history,” and the plane was believed to be in good condition, Al Jazeera’s Washington said.

Indonesia, the world’s largest archipelago nation with more than 260 million people, has been plagued by transport accidents on land, sea and air because of overcrowding on ferries, ageing infrastructure and poorly enforced safety standards.

A Boeing 737 MAX operated by Indonesian airline Lion Air crashed off Jakarta in late 2018, killing all 189 passengers and crew. The plane that lost contact on Saturday is a much older model.

In December 2014, an AirAsia flight from Surabaya to Singapore plunged into the sea, killing 162 people.

Sriwijaya Air is one of Indonesia’s discount carriers, flying to dozens of domestic and international destinations.

The airline has a solid safety record until now with no onboard casualties in four incidents recorded on the Aviation Safety Network database, though a farmer was killed when a Boeing 737-200 left the runway in 2008 following a hydraulic problem.

Aisyah Llewellyn contributed to this report from Indonesia.