Thousands of Orthodox Christian worshippers in Bulgaria have ignored warnings issued by health authorities to abstain from mass gatherings due to the coronavirus pandemic and kept to their centuries-old Epiphany traditions.

Young men plunged into the icy waters of rivers and lakes across Bulgaria on Wednesday to retrieve crucifixes tossed by priests in ceremonies commemorating the baptism of Jesus Christ.

The legend goes that the person who retrieves the wooden cross will be freed from evil spirits and will be healthy throughout the year.

Inspired by bass drums and bagpipes and fortified by homemade liquor, they performed a slow “mazhko horo”, or men’s dance, stomping on the rocky riverbed.

The mayor of Kalofer, who usually leads the dance, this year did not enter the river to set an example that coronavirus regulations have to be followed.

A few police officers attempted to prevent people from entering the river – threatening them with fines – but their calls were widely ignored.

Epiphany marks the end of the 12 days of Christmas but not all Orthodox Christian churches celebrate it on the same day.

While the Orthodox Christian churches in Greece, Bulgaria and Romania celebrate it on January 6, Orthodox Churches in Russia, Ukraine and Serbia follow the Julian calendar, according to which Epiphany is celebrated on January 19 as their Christmas falls on January 7.

Despite a plea by Prime Minister Kyriakos Mitsotakis for Church authorities to set an example during a crisis that has killed more than 5,000 people in Greece, worshippers attended morning services, although limits were placed on the number allowed into churches at one time.

“State orders are one thing and faith is another,” said 38-year-old Stavroula after attending morning service at a church on the outskirts of Athens. “No law can order us what to do.”

Police patrolled outside a number of churches but said they would not interfere with services and would use “mild” measures to persuade people not to crowd inside.

The approach underlined the reluctance of Mitsotakis’s conservative government to seek confrontation with the Orthodox Church, which plays an influential role in Greek public life.

On Sunday, authorities extended public lockdown measures, effectively withdrawing permission which had been granted previously to hold Epiphany services with a maximum of 50 people in large churches and 25 in smaller ones.

On Monday, in a rare show of dissent, Synod leaders wrote to the government to say there was no justification for preventing Epiphany services.

Until now, the Church has largely respected curbs on religious services to limit the spread of COVID-19. 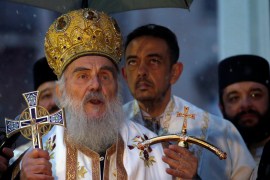 Patriarch Irinej recently led prayers for a bishop who died of coronavirus in a service where many kissed the body. 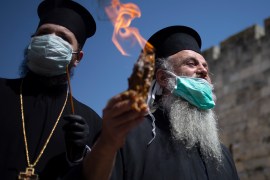 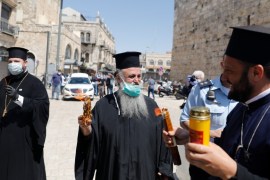