The United States has reversed a decision to bring an aircraft carrier home from the Gulf, with the Pentagon saying that due to “recent threats” by Iran, the USS Nimitz would stay in position.

The Nimitz has been patrolling Gulf waters since late November. In a statement on December 31, acting US Defense Secretary Christopher C Miller ordered the vessel to “transit directly home to complete a nearly 10-month deployment”.

The New York Times newspaper, quoting US officials, said the move was part of a “de-escalatory” signal to Tehran to avoid a conflict during President Donald Trump’s last days in office.

However, Miller issued a new statement changing course on Sunday.

“Due to the recent threats issued by Iranian leaders against President Trump and other US government officials, I have ordered the USS Nimitz to halt its routine redeployment,” said the statement.

“The USS Nimitz will now remain on station in the US Central Command area of operations. No one should doubt the resolve of the United States of America.”

While he did not elaborate on the threats involved, the statement came on the first anniversary of a US drone raid in Baghdad that killed Iran’s revered commander Qassem Soleimani and his Iraqi lieutenant, Abu Mahdi al-Muhandis.

On Sunday, thousands of Iraqi mourners chanted “revenge” and “no to America” as they marched in capital Baghdad and other cities.

The anniversary of the Baghdad drone attack was also marked in recent days across Iran and by supporters in Syria, Lebanon, Yemen and elsewhere.

Trump unilaterally withdrew the US from a landmark nuclear deal with Iran and world powers in 2018 and launched a “maximum pressure” campaign against Tehran, reimposing and reinforcing crippling sanctions.

The two countries have twice come to the brink of war since June 2019, especially following the killing of Soleimani.

Days after the Soleimani assassination, Iran launched a volley of missiles at Iraqi bases housing US and other coalition troops, with Trump refraining from any further military response.

Reacting to the Pentagon’s reversal of its decision to bring back the aircraft carrier, the Iranian foreign ministry on Monday said the country’s security and military organisations were closely monitoring the situation in the Gulf.

“Necessary messages have been explicitly and transparently sent to Washington through different channels and messages have also been sent directly to all the countries in the Persian Gulf region not to fall prey to such mischiefs,” spokesman Saeed Khatibzadeh said during a news briefing.

Khatibzadeh also reiterated Zarif’s recent claim that Israel is trying to goad Iran and the US into a larger conflict by hitting American targets in Iraq.

On Saturday, Zarif said on Twitter: “New intelligence from Iraq indicate that Israeli agent-provocateurs are plotting attacks against Americans – putting an outgoing [President Donald] Trump in a bind with a fake casus belli.”

“Be careful of a trap, @realDonaldTrump. Any fireworks will backfire badly, particularly against your same BFFs,” Zarif wrote.

An Israeli official on Sunday dismissed as “nonsense” Tehran’s allegation that Israel was trying to trick the US into waging war on Iran.

“We hear this nonsense by Zarif, that Israel would set off terrorist attacks against the United States – this really is total nonsense,” Israel’s Energy Minister Yuval Steinitz told Kan public radio.

But the Iranian foreign ministry spokesman on Monday said “they [Israel] have no shame to reach some of their goals at the expense of American blood”.

“Our answer is that we do not seek tensions, but will not compromise on our national security and will respond seriously,” he said.

Maziar Motamedi contributed to this report from Tehran, Iran 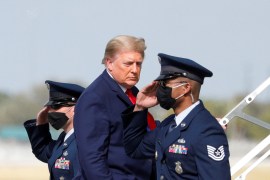 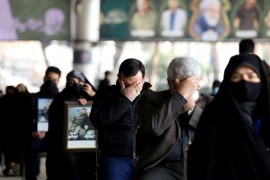 Iran warns US against escalation a year after Soleimani’s killing

Iran says US show of force may raise tensions to ‘alarming level’ ahead of the anniversary of Qassem Soleimani killing. 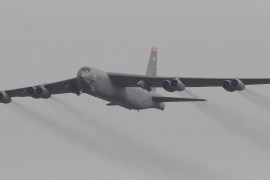 US bombers fly over the Gulf amid tensions with Iran

Washington says bombers flew over the Gulf to deter Tehran from attacking American or allied targets in the region.