An Indian state has blocked mobile internet across most of its districts, following clashes between hundreds of protesting Indian farmers and groups of men shouting anti-farmer and pro-police slogans.

Mobile internet in 15 of 22 districts in Haryana state bordering the capital New Delhi will be unavailable until 17:00 local time on Saturday, according to a circular from the state government.

Authorities used tear gas and batons on Friday to break up the clashes at Singhu in Haryana, one of several protest sites near New Delhi.

The protesting farmers are opposing reforms which aim to deregulate farm produce markets that have for decades been organised by state bodies with minimum prices guaranteed.

Those protesting say the changes will let Indian conglomerates take over the farming industry which will ruin their livelihoods.

The government says the reforms will open up new opportunities for farmers and that it will not bow to the protesters’ demands.

Supporters of India’s governing Bharatiya Janata Party (BJP) are accused of attacking the protesting farmers, who are demanding the government to withdraw the controversial laws.

Avik Saha, a farmers leader with the All India Kisan Sangharsh Coordination Committee, told Al Jazeera said it was “bizarre” that is appeared the governing party is waging war on the farmers of India who form more than 50 percent of the Indian population.

“Far too many people are dependent on agriculture in India for free markets to play itself out. There is too much insecurity in the minds of farmers, so the farmers want a law to guarantee their income.

“The ruling party does not want to guarantee that and they have let loose their supporters, a very small number of them, against this multitude of farmers. That is strange and that should not have been the political strategy of the ruling party.”

In a standoff between riot police and the farmers, authorities tried on Thursday night to clear another protest site in the city’s east, but most farmers refused to move and thousands more marched overnight to join them.

Their leaders said any retreat would constitute surrender.

“Concerned over police high-handedness, thousands of farmers, who were not part of the protest, have now come to bolster our movement,” Rakesh Tikait, president of one of the largest farmers unions, the Bharti Kisan Union, told the Reuters news agency on Friday.

Tensions have been building around the farmers’ camps since Republic Day on Tuesday when a tractor rally turned into a citywide rampage which left one farmer dead and nearly 400 police officers injured.

The government has deployed thousands of extra police and paramilitaries in New Delhi and around the camps since then. One small camp has been closed, as have many roads around the protest sites.

On Friday, one police officer was wounded in the hand during a scuffle with a sword-wielding farmer, an AFP reporter at the scene said.

The authorities cut power and water to one protest camp at Ghazipur, but hundreds more farmers arrived overnight on tractors to reinforce what has become the biggest challenge to Hindu nationalist Prime Minister Narendra Modi since he took power in 2014.

Modi retains a solid majority in Parliament although the protests are beginning to undermine some support for the government in the countryside.

Tens of thousands of farmers have been at the camps since late November and despite this week’s violence, their leaders have signalled they are digging in for a prolonged new showdown.

President Ram Nath Kovind told the opening of a budget session of Parliament that the storming of the landmark Red Fort by farm protesters on Tuesday had been an “insult” to the national flag.

But in a sign of the growing political divisions caused by the dispute, opposition parties boycotted his speech.

While farmers have called off a plan to march on Parliament next Monday – when the government outlines its annual spending plan – they reaffirmed their determination to stay at the camps.

“The government is trying to derail our protest through lies and mischief,” said Sukhdev Singh, a farmer in his thirties. He said their families in Punjab state were worried but did not want them to return.

“We won’t budge from here till the laws are taken back – even if that takes a day, a month, or a year or 10 years.” 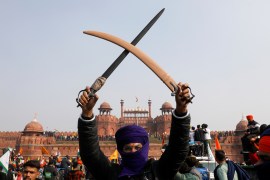 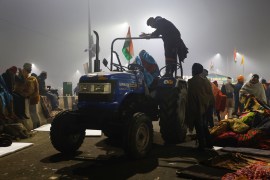 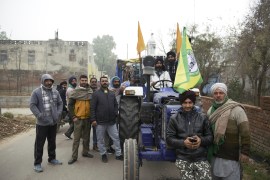 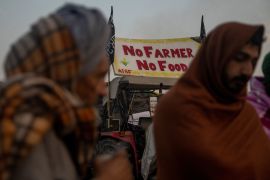