The United States is reviewing weapons sales to Saudi Arabia and the United Arab Emirates (UAE) authorised by former President Donald Trump, a move that Secretary of State Antony Blinken said was “typical” of a new administration.

In his first press briefing on Wednesday, Blinken said the review aims “to make sure that what is being considered is something that advances our strategic objectives and advances our foreign policy”.

“That’s what we’re doing at this moment,” he told reporters.

The Wall Street Journal first reported on Wednesday that the Biden administration has imposed a temporary freeze on billions of dollars in weapons sales to the two countries, including the sale of precision-guided munitions to Saudi Arabia and F-35 fighters to the UAE.

The move comes one week after Biden, who has promised to “reassess” Washington’s relationship with Riyadh, was inaugurated. Since taking office, he has signed a string of executive actions to review or reverse some of Trump’s key policies.

Trump oversaw a close-knit US relationship with both the UAE and Saudi Arabia, in line with his staunch support for Israel and “maximum pressure” campaign against Iran.

In May 2019, the former US president declared a national emergency over tensions with Iran to sidestep objections from Congress about the sale of $8bn worth of weapons to Saudi Arabia, the UAE and Jordan.

The Trump administration also authorised $290m worth of small munition sales to Saudi Arabia at the end of December of last year.

The Trump administration notified Congress in November that it had approved the sale of more than $23bn in advanced weapons systems, including F-35 fighter jets and armed drones, to the UAE.

That announcement came shortly after the Emirati government agreed to normalise relations with Israel in a US-brokered deal.

“This is in recognition of our deepening relationship and the UAE’s need for advanced defense capabilities to deter and defend itself against heightened threats from Iran,” then-US Secretary of State Mike Pompeo said in a statement at the time.

Rights groups denounced the sale, saying it could fuel regional conflict, notably in Libya and in Yemen, where the UAE and Saudi Arabia have waged a devastating war against the country’s Houthi rebels.

Legislators put forward bipartisan joint resolutions seeking to stop the deal, but their efforts failed in the US Senate, where two procedural votes did not gain a majority in the chamber.

Trump had threatened to veto any congressional effort to halt the sales, as well. 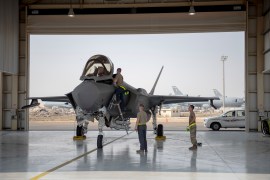 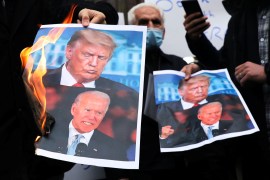 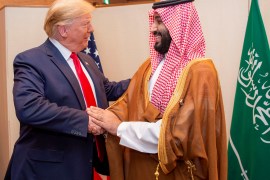