Hong Kong has placed thousands of its residents in a lockdown to contain a new outbreak of the coronavirus, the first such measure the Chinese-ruled city has taken since the pandemic began.

The order effective on Saturday covers multiple housing blocks in the neighbourhood of Jordan in Kowloon Peninsula.

“Persons subject to compulsory testing are required to stay in their premises until all such persons identified in the area have undergone testing and the test results are mostly ascertained,” the government said in a statement, adding it planned to complete testing in 48 hours.

Officials said they planned to test everyone inside the designated zone for the next two days “in order to achieve the goal of zero cases in the district”.

The South China Morning Post said the measures covered about 150 housing blocks and up to 9,000 people with hundreds of police on standby to enforce the lockdown.

Hong Kong was one of the first places to be struck by the coronavirus after it burst out of central China.

It has kept infections to less than 10,000 with some 170 deaths by imposing effective but economically punishing social distancing measures for much of the last year.

Jordan and Sham Shui Po are home to many older flats that have been subdivided to make room for more people, providing the kind of conditions in which the virus could spread more easily.

“Persistently high and spreading infection [in the areas] and sewage surveillance suggest the outbreak is not yet under control, and many silent sources still exist within the area,” a source had told The Post.

Health authorities in the city of 7.5 million first isolated four tenement blocks in the area last Friday, stopping people from entering or leaving those buildings to make sure all residents were quarantined.

The government will lift the lockdown declaration only when it is satisfied everyone in the area has been tested, the paper said.

Hong Kong has so far reported far fewer infections than other big world cities, recording less than 10,000 cases in the past year. The territory’s death toll stands at 168.

On Friday, health officials reported 61 new cases cases. A total of 718 people remain hospitalised and 34 are in critical condition.

Other COVID restrictions include a ban on in-house dining after 6pm (10:00 GMT) and the closure of facilities such as gyms, sports venues, beauty salons and cinemas.

Hong Kong is also set to require flight crews entering the territory for more than two hours to quarantine in a hotel for two weeks.

Meanwhile, officials have ordered medical workers to refrain from socialising with others after four nurses from various hospitals tested positive or preliminary positive for the virus, the Hong Kong Free Press reported.

“We would like to remind our colleagues not to eat together during work or holiday,” Linda Yu, a senior health official, was quoted by the news site as saying.

“It’s soon Lunar New Year holiday, we hope that our colleagues can tolerate for a bit [longer] and maintain social distancing.” 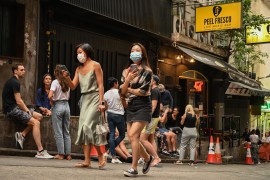 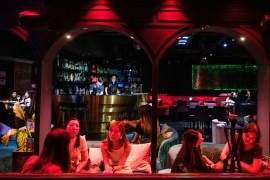 New measures to come into force on Nov 26 because of the ‘serious epidemic situation’ in the territory. 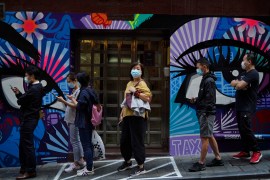