The Prisoners Commission and the Palestinian Prisoners Society (PPS) said Maher Deeb Saasa, 45, from the occupied West Bank town of Qalqilya, died on Wednesday in Rimonim prison north of the Israeli city of Tel Aviv.

They said Saasa, a father of six, received a coronavirus vaccine shot on Tuesday, adding that he had been suffering from several chronic illnesses.

“There are no clear details yet about the reasons for his death … his case will be followed up and the reasons will be examined,” the joint statement said.

The two groups said that they hold Israel fully responsible for his death as well as the life and wellbeing of all Palestinian prisoners in its jails.

Saasa, who was been imprisoned since 2006, was serving a 25-year sentence.

Since the beginning of the pandemic, at least 290 Palestinian prisoners in Israeli jails have been infected with the coronavirus.

The PPS said it is following “with great concern the dangerous developments” regarding the spread of COVID-19 among the prisoners.

It singled out the Israeli prison administration in Ramon prison in particular – where most of the elderly and sick Palestinian prisoners are – accusing them of delaying testing the prisoners, which it said has contributed to widespread transmission.

Ramon was briefly shut down last December, the PPS saying at the time that the increase in cases among the Israeli jailers was “the first source of transmission of the virus to the prisoners”.

Saasa’s death brings to 227 the total number of Palestinian prisoners who died in Israeli jails since 1967.

Israel is holding approximately 4,400 Palestinians – including 41 women and 170 children – 380 of whom are being held without charge or trial under its administrative detention policy. 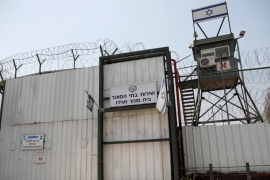 Israel shuts down Ramon prison due to COVID infections

Palestinian NGO said increasing infections among Israeli jailers is the ‘first source of transmission’ to prisoners. 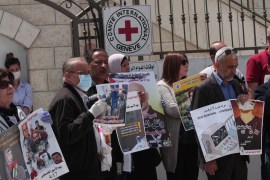 Announcement comes as Israel faces calls to provide jabs for millions of Palestinians in occupied West Bank and Gaza.

Fears over most vulnerable Palestinian prisoners amid coronavirus

Detainees commission says there are 700 Palestinians currently held in Israeli prisons who are sick.