At least four people have been killed in Madrid and 11 injured when a building partially collapsed following a massive explosion on Wednesday caused by a gas leak.

The blast, which occurred around 3pm (14:00 GMT), started a fire inside the building.

Government representative Jose Manuel Franco told Spain’s public television that the blast occurred as a team of workmen were repairing the building’s boiler, adding that it was caused by a “gas explosion”.

At least 11 people were injured in the explosion, one seriously, the Madrid emergency service said in a tweet.

Images and footage shared on social media showed a tower of smoke coming out of the six-storey building and rubble scattered on Toledo Street near the city centre.

Madrid regional emergency service said in a tweet that rescue teams, firefighters and police were working in a central area of the Spanish capital following the explosion.

Big explosion in the centre of Madrid minutes ago. Unclear how many victims pic.twitter.com/Q4RSyCcG1J

Emergency crews could be seen aiding several people on the ground in a video aired by Spain’s public broadcaster, TVE.

A local resident, Leire Reparaz, told The Associated Press she heard a loud explosion as she was heading home near the Puerta de Toledo, a local landmark.

“We didn’t know where the sound came from. We all thought it was from the school. We went up the stairs to the top of our building and we could see the structure of the building and lots of smoke,” the 24-year-old Madrid resident said.

Lola Lopez Bravo was having lunch with her six-year-old son in their nearby home when the blast occurred, bringing down the wall in her apartment.

“We were eating, suddenly we heard a noise and the wall in front of us started falling on top of us,” the 44-year-old told AFP news agency.
“There was a huge hole in the wall and then the rubble started falling so we ran out of the house and went to a neighbour’s place.”

Lorenzo Fomento, a 43-year-old Italian salesman who was working from home at a nearby apartment, told AFP the noise was tremendous.

“The noise was very loud, very loud, really,” said Fomento. “I never heard something as loud before.” 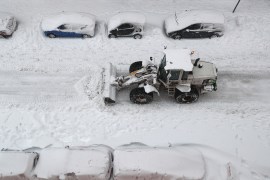 Blizzard in Spain has killed at least four and trapped thousands in cars, train stations and airports. 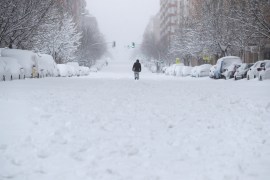 Deadly snowstorms cause chaos across Spain

Heavy snowfall left at least four people dead across the country, trapped motorists, and shut down much of the capital. 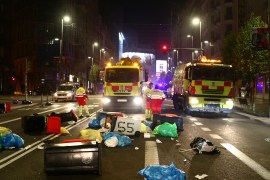 With people taking far fewer trips by road amid lockdown measures, the number of fatal accidents has dropped 21 percent.