No handshakes, no high-fives and no hugs.

This has been the norm for most people around the world since COVID-19 began spreading rapidly in early 2020 – but not for everyone, all of the time.

Almost on a daily basis, the familiar sight of footballers celebrating a goal, touchdown or buzzer-beater flashes on TV screens, even as governments worldwide keep rolling out containment measures in a bid to beat back a resurgence in infections.

No handshakes? No high fives? No hugs? That was not the case earlier this month when celebrations inside UK football teams’ dressing rooms sparked criticism and revived calls for sport to be included in lockdown rules.

COVID-19 has so far killed more than 80,000 in the United Kingdom, with cases and hospital admissions hitting an all-time high in recent weeks. The country has also reported a new “highly contagious” variant that forced the government to enforce stricter restrictions but allowed elite sport to go ahead, a decision that has been lauded and criticised at the same time.

“I think the priority for governments should be grassroots sport and exercise and how that can be kept operational rather than elite sport,” David Goldblatt, sports writer, journalist and author, told Al Jazeera.

‘Not the time for complacency’

In the English Premier League, 221 positive cases among players have been reported since the start of testing in August.

A number of football games have been postponed and football bosses have told players to “change their behaviours”, warning them “now is not the time for complacency” over protocols, including maintaining social distance.

The chief executive of the EFL, the second division in English football, recently said it was “more important than ever that all club staff and players vigilantly follow the processes to avoid a suspension and the implications, particularly financial, associated with such a drastic course of action”.

“Morally, with the situation we have in this country and worldwide, to keep doing what we are doing is a little bit of a strange feeling,” Arsenal football club boss Mikel Arteta said this month.

“We know what we can bring to society if we are able to do it in a safe way,” said Arteta, referring to the positive effects that backers of allowing sport to continue have claimed it brings.

Football is not the only sport that has been affected by the coronavirus.

The 2020 Tokyo Olympics was deferred by 12 months, with its fate still in the balance. The Japanese government is firm the Games will go ahead “even without making vaccines a condition”. But, in a survey done by Japanese news agency Kyodo News this month, about 80 percent of respondents said the Olympics should be cancelled or rescheduled once again.

It is a view shared by Goldblatt who said: “The Tokyo Olympics should be cancelled. International and global events should be curtailed for the moment. Crowds of any size are just not wise for the rest of this year.”

Meanwhile, the 2021 Women’s Cricket World Cup has been pushed back by a year, and the 2020 men’s World Twenty20 was also postponed.

Women’s Six Nations rugby tournament had a similar fate but authorities are confident the men’s event will go ahead as scheduled in February.

Earlier this month, the Asian Beach Games in the Chinese city of Sanya were also postponed for a second time.

Currently, 72 tennis players and their coaching teams are being forced to isolate for two weeks in their Melbourne hotel rooms after positive cases were reported on their incoming flights.

Australian Open tournament director Craig Tiley has confirmed the year's first Grand Slam will go ahead from February 8 despite anger from some tennis players forced into hard quarantine due to positive COVID-19 cases on their charter planes. More here: https://t.co/VYM2DfOFR4 pic.twitter.com/GqfvMvDsvu

Cricket authorities meanwhile, in order to keep the sport going, have enforced bio-secure bubbles for all players, officials and support staff where no contact with individuals outside of this bubble will be allowed for the duration of tournaments or series.

However, this, in addition to the quarantine period for all arrivals, is said to be mentally draining and physically exhausting for the cricketers.

Australian fast-bowler Mitchell Starc said it was “not a sustainable lifestyle”.

“It’s tough going,” said Starc. “We get to play cricket, we can’t complain too much. But in terms of wellbeing of players, staff and officials, how long can you stay in hubs for?”

Indian captain Virat Kohli has urged authorities to take the length of future tours into account given the time spent in these bubbles.

A huge shout out to everyone at @ECB_cricket & @TheRealPCB for arranging series in these trying times. The isolation of bio secure bubble was challenging for players but everyone played their part.

Pakistan is returning home with a lot of positives. Onwards & Upwards. #ENGvPAK pic.twitter.com/ME0BeJPxc8

It has even been used as a reason when players’ on-field performance is below-par.

Pakistan head coach Misbahul Haq said “the implementation of certain regulations has affected our athletes, both mentally and physically prior to an international series” after his side were forced to extend their quarantine on the tour of New Zealand after breaches were caught on security cameras.

But Dr Yorck Olaf Schumacher, sports medicine physician at Aspetar, an orthopaedic and sports medicine hospital in Qatar, said bio-secure bubbles can be impossible to manage and can have negative effects on an athlete’s mental health.

“It’s impractical. It looks very nice on paper but it won’t work,” Schumacher told Al Jazeera. “They might work for seven days. You can lock them up, no problem. But after that, it gets very difficult. They will find ways to sneak out.”

Tennis players have been preparing for the Australian Open in quarantine by turning their hotel rooms into private gyms pic.twitter.com/W2gjgxDaLL

Schumacher, however, gave a green light to sporting activities, including top-level football, to proceed in the midst of the lockdowns and restrictions.

“We have reliable data proving that outdoors sports like football are a very low risk of spreading the coronavirus. Most of the transmission takes place outside of the stadiums – social gatherings and families.

“If you have measures in place, football is low risk. Transmission rate during the games is very low. And even if they are affected, they are young, fit and healthy and, while passing it on is possible, they are unlikely to develop severe symptoms.”

Our sport is once again being used as a political football & a distraction. The game will no doubt adhere to rules not to celebrate goals. This is easily done, everyone will do what they can to keep playing, give us some enjoyment & something to watch during this dreadful time.

With crowds being eased back into the stadium at various tournaments, it seems unlikely a global sporting halt is about to be implemented anytime soon.

Allowing sporting events to go ahead – with protocols and checks in place – is worth the risk, given the “joy” it brings to those in lockdown, according to English footballer Charlie Austin.

“We are actually bringing joy to people. For the people who are at home, who aren’t working,” said Austin. “If it comes off TV, it is even more doom and gloom than what we are told in the news.”

However, as another English footballer Curtis Davies explained, it may seem a “bittersweet” moment.

“The regular football fan is out there social distancing. Hands, face, space and all that,” said Davies. “Then there are footballers – I know they are in bubbles and trying to stick to regulations – that are high-fiving and hugging. It’s bittersweet for a football fan to watch.” 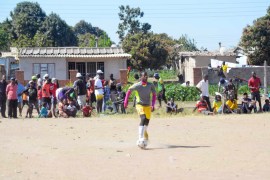 The unsanctioned, illegal matches provide much-needed cash after the cancellation of the regular season due to COVID. 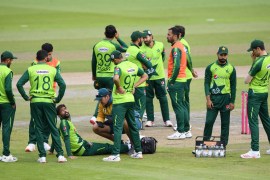 New Zealand officials say players would be moved into quarantine, throwing preparations for the series into turmoil. 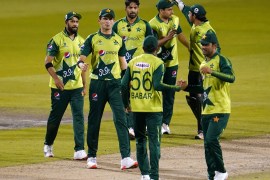 By not winning any of the 10 individual prizes, Pakistan is the only major team not to be represented at the awards.