Uganda’s longtime President Yoweri Museveni has secured a sixth term in office that will take his reign into a fourth decade following a poll his rivals say was marred by irregularities.

The electoral commission said on Saturday Museveni, who has been in power since 1986, had secured 58.6 percent of the vote.

Bobi Wine, the 76-year-old’s closest challenger who garnered an official 34.8 percent, said on Sunday he would contest the election results in court.

“I … take this painful but nonetheless inevitable leadership decision of urging you to desist from any form of violence as we prepare to challenge the election outcome and its glaring imperfections through the courts of law for the sake of our long-term victory and for Uganda,” Bobi Wine said in a statement posted on his party’s Twitter account.

The 38-year-old musician-turned-politician, whose real name is is Robert Kyagulanyi Ssentamu, was not the only opposition leader to reject the results alleging fraud.

“It’s time to turn the page and engage in the next stage of the struggle. We will not live like serfs in our own country,” Mugisha Muntu, candidate for the Alliance for National Transformation party, said on Twitter shortly after the announcement was made.

“These results are completely fabricated,” he added.

However, analysts said they did not expect a legal challenge to produce a different result – as it did not in 2016, when former opposition leader Kizza Besigye filed a petition seeking to nullify Museveni’s re-election in that year’s polls.

“Similar to Besigye, who took the case to the court, the court will rule: ‘while there were irregularities, they were not enough to change the outcomes of the election’,” Abdullahi Boru Halakhe, a Horn of Africa analyst, told Al Jazeera.

“After failing at the law court, the most predictable outcome is taking the matter to the court of public opinion. Here again, the template the security agencies used against Besigye is instructive,” Halakhe added, referring to Besigye’s repeated arrests.

“The security agencies will use disproportionate force against Bobi Wine and his supporters.”

The run-up to Thursday’s polls was marked by one of the bloodiest campaigns in years, with security forces violently breaking up opposition rallies citing coronavirus concerns and jailing a number of opposition figures. In November, more than 50 opposition supporters were killed over two days of demonstrations following the arrest – one of several – of Bobi Wine.

The leader of the National Unity Platform, who has a huge following among the country’s youth, had previously said he would lead peaceful protests if the poll was rigged.

“Uganda has one of the world’s youngest populations. A huge percentage of this population voted for Bobi Wine,” said Halakhe. “It will be really concerning if Bobi Wine decided to take the fight to the streets.”

Museveni, who dismissed the opposition’s allegations and said the poll was free and fair, warned that authorities will not tolerate any unrest.

“The riots will not happen and if they [opposition] did try, they will be dealt with. Not like the other time when the police was caught by surprise,” he said.

In an address to the nation on Saturday evening following the announcement of the results, the president argued that “this may turn out to be the most cheating-free election in the 58 years of Uganda’s independence” – but also promised to look into allegations that voting machines failed in several polling stations.

“We are going to audit because on account of the removal of the internet there was no immediate transmission of the voting patterns from polling stations,” he said.

The government ordered telecommunication companies to shut down the internet on the eve of the polls, and the blackout has remained in place.

In Kampala, shortly before the results were announced, security forces poured onto the streets of the capital in large numbers.

Bobi Wine’s house, meanwhile, was also under heavy security, with soldiers barring journalists and visitors from accessing the property. Officials say the security forces are there for Bobi Wine’s own security.

It’s now four days since the military surrounded our home and placed my wife and I under house arrest. We have run out of food supplies and when my wife tried to pick food from the garden yesterday, she was blocked and assaulted by the soldiers staged in our compound. (ADMIN) pic.twitter.com/MLEtSbyCcW

“It’s now four days since the military surrounded our home and placed my wife and I under house arrest,” said a Twitter update under Bobi Wine’s account on Sunday.

“We have run out of food supplies and when my wife tried to pick food from the garden yesterday, she was blocked and assaulted by the soldiers staged in our compound,” it added.

The Twitter account also said Francis Zaake, a prominent member of parliament who had been arrested as he attempted to visit Bobi Wine’s house on Friday, had been admitted to hospital “badly beaten and brutalised” by security forces.

The United States, meanwhile, said it was “deeply troubled” by events in Uganda, noting that voters cast their ballots in an environment of “intimidation and fear”.

“We are deeply troubled by the many credible reports of security force violence during the pre-election period and election irregularities during the polls,” Morgan Ortagus, the State Department’s spokesperson, said in a statement late on Saturday. “We strongly urge independent, credible, impartial, and thorough investigations into these reports and that those responsible be held accountable.

“We condemn the continuing attacks on political candidates and urge the government to respect their human rights and fundamental freedoms, including the freedom of expression,” Ortagus added.

Meanwhile, closer to Uganda’s border in Tanzania, President John Magufuli – himself re-elected late last year in a poll the opposition alleged was rigged – congratulated Museveni for his victory and called on Ugandans to continue maintaining the “peace”. 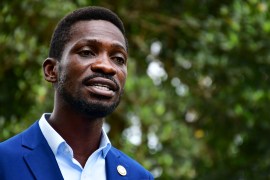 Uganda’s opposition leader urges supporters to refrain from violence as he plans to challenge Museveni win in court. 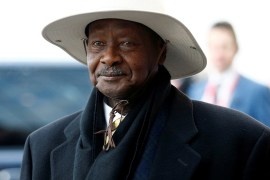 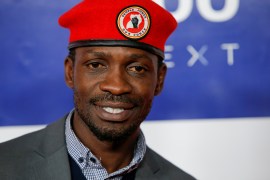